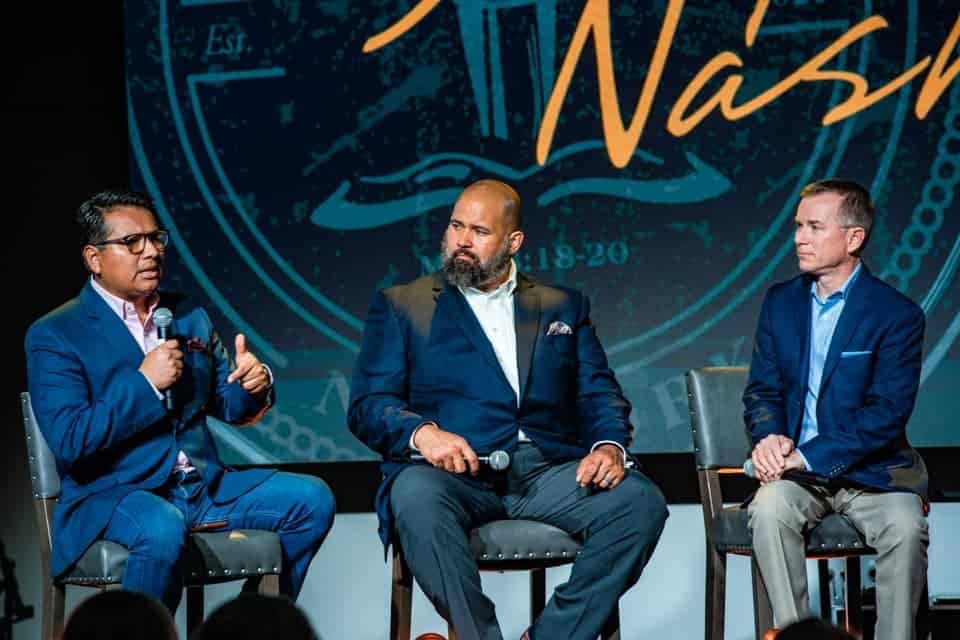 Javier Chavez, Lee Brand and Mike Stone share their vision for the Southern Baptist Convention during a luncheon at First Baptist Church in Bossier City April 26, 2021. All three are candidates for the 2021 SBC Annual Meeting. First Bossier photo

“The only votes that will count are those of the messengers who go from your church to the annual meeting of the Southern Baptist Convention,” he continued. “So, the way you address this is not on Twitter. The future is not changed by retweets and likes. You don’t address it on social media. You address it by contacting your local association, your state convention, and you find out what is the maximum amount of messengers that your church is qualified to take. And you set aside money in your church budget if necessary. And you do whatever it takes to get the maximum number of messengers to the Music City Conference Center in the middle of June this year.”

Stone, pastor of Emmanuel Baptist Church in Blackshear, Georgia, appeared on stage with Lee Brand, a vice president and dean of Mid-America Baptist Theological Seminary in Memphis, Tennessee, who is a candidate for first vice-president, and Javier Chavez, a pastor-church planter of Amistad Cristiana International in Gainesville, Georgia, a candidate for second vice-president, during a discussion sponsored by the Conservative Baptist Network.

The 10,000-member CBN seeks to halt a leftward drift in the SBC, according to CBN leaders.

Brad Jurkovich, pastor of First Baptist, Bossier, and the spokesperson for the CBN, emphasized the need to register as messengers and vote during the election in what he called a pivotal time in the history of the SBC.

“I think it’s a critically important time,” Jurkovich said. “You see all this chaos and everything. I believe there’s a moment here where God’s people, through what we call the Southern Baptist family, can make a huge difference. It’s time for courage and clarity.”

Stone, who spoke to a crowd at another CBN-sponsored luncheon March 16 at Philadelphia Baptist Church in Deville, outlined his three-pronged plan to help turn around the denomination: evangelism, establish the sufficiency of Scripture in how Southern Baptists respond to moral, political, and social issues, and an emphasis on greater involvement of grassroots Southern Baptists.

“This is one of the primary reasons why we should reject unbiblical, ungodly, unhelpful and unproductive ideology and philosophy,” he said. “Critical Race Theory and Intersectionality, if you study it down to its Marxist roots, it is deconstruction at its nature, and we should not be surprised when it divides. It’s not a tool of unity. It is a weapon of division. I would say by way of a quick example, when Southern Baptists were using nothing but the Word of God led by the Spirit of God, we were making progress in this area all across our convention. But when Critical Race Theory and Intersectionality got injected into the bloodstream of Southern Baptist conversation going back officially to the 2019 convention in Birmingham, Alabama, we have had absolutely nothing but confusion and division and chaos all across our convention. And we shouldn’t be surprised. That’s what this theory is designed to do, to divide people on the basis of ethnicity and their particular power structure.”

Brand, who is African-American, noted the convention took a step back when messengers approved Resolution 9 during the 2019 Annual Meeting. He said Southern Baptists must be people of biblical principle.

“I am here because I believe with all my heart that the SBC is more needed now than ever,” he said. “I don’t think there’s anybody who has spiritual eyes that would say that we are not living in times of darkness. And in times of great darkness you need great light. That light is the Gospel.”

Chavez, a Hispanic pastor, said he also is concerned about the adoption of Resolution 9 and cautioned Southern Baptists about using it as an analytical tool. He noted that communism and socialism have caused great harm in Latin America.

“Many of my Latino friends fled to America because this is the home of the brave, the land of the free,” he said. “And when I come to America and I notice that some of these socialist ideas are somehow engaging and entering into our politics and even into our denomination I get worried because instead of going forward we are going backward. And we have to do something about that.

“So when someone told me look, we have got to be careful about CRT, I said yes we got to be careful because that’s how all this starts,” Chavez said, “and it starts with some analytical idea but at the end of the day there is an ideology behind this whole thing. What is this ideology? To take us away from the only thing that can change a person, a family and a nation and that is the Gospel of Jesus Christ. I still keep preaching the Gospel. The Bible is more than enough.”

A video of the luncheon may be viewed at https://www.facebook.com/firstbossier.

By Chuck Kelley Rarely does Hollywood contact a Southern Baptist seminary, but rarely is not never. One day location scouts for a major motion picture to be filmed in New Orleans called NOBTS and asked to tour the campus. They were looking for a place that with a bit of movie magic could be made to look like the … END_OF_DOCUMENT_TOKEN_TO_BE_REPLACED