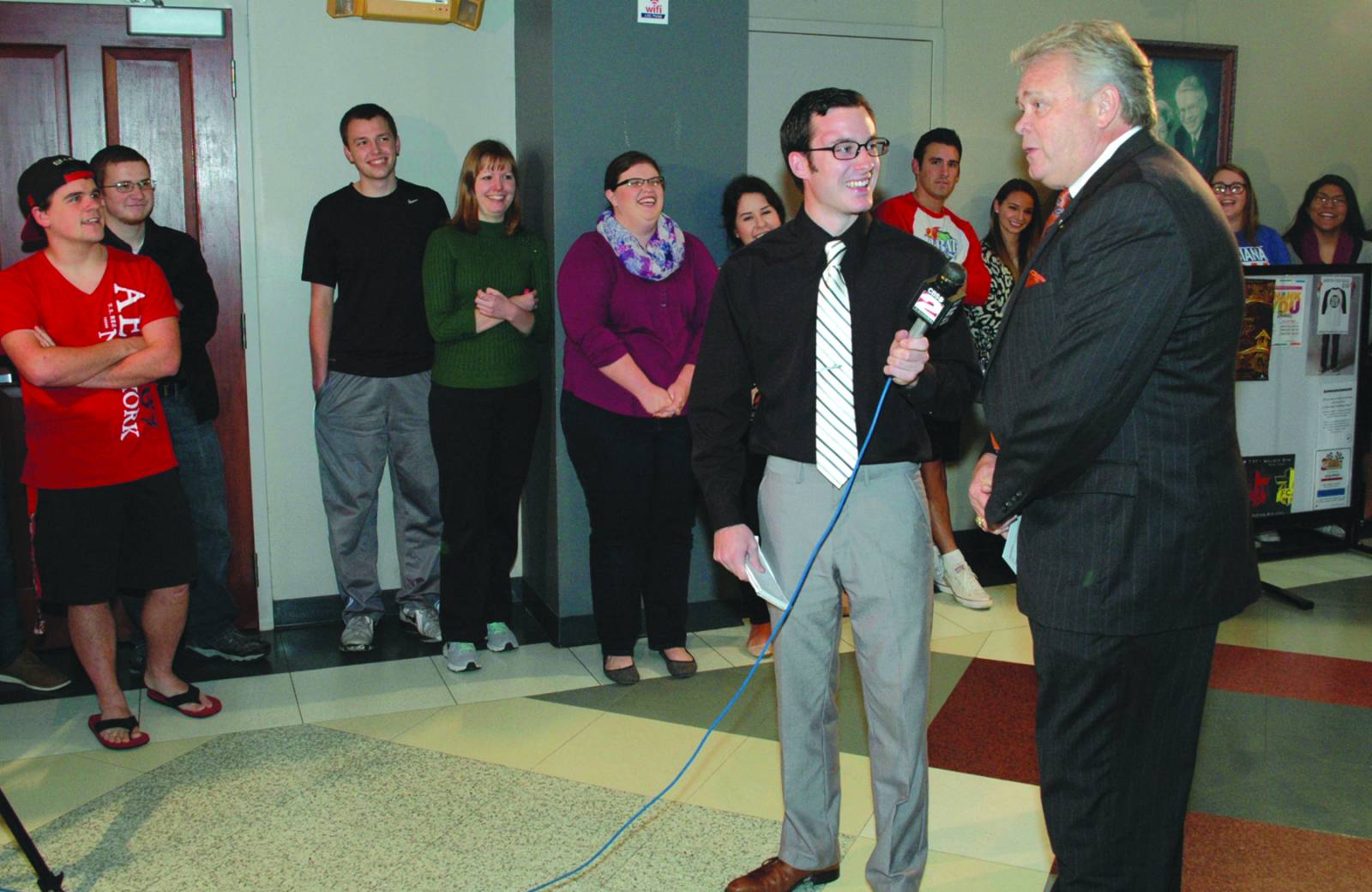 Louisiana College President Rick Brewer announced Dec. 8 during a live newscast on KALB, an Alexandria TV station, the Southern Association of Colleges and Schools Commission on Colleges had removed the probationary status from LC’s accreditation.

PINEVILLE – Louisiana College received an early Christmas gift Dec. 8 and LC President Rick Brewer wanted to share it with everyone.

After 18 months, probationary status was removed from the school’s accreditation by the Southern Association of Colleges and Schools Commission on Colleges.

Since June 2014, LC maintained its accreditation but remained on probation most recently because the SACSCOC Board of Trustees surmised from materials submitted by the previous administration that the school’s governing documents had holes relating to administrative procedures for identifying and addressing incidents of undue external influence from political, religious, or other external bodies.

Surrounded by students, faculty, alumni and community leaders, a smiling Brewer expressed gratitude for his administrative team and the board of trustees for their work in formalizing controls that ensure the school complies with every accreditation standard.

He learned of SACSCOC’s decision that morning and returned in the afternoon from SACS’ annual meeting in Houston, Texas to report the good news.

Brewer said he was grateful to his senior administrative team for responding with a fix for the previous administrative deficiency with regard to SACSCOC comprehensive standard 3.2.4 and also grateful to the board of trustees “who, in their September meeting adopted a new bylaw that details how to respond to, and report undue external influence,” he said. “My intent is for Louisiana College always to be found in compliance with every accreditation standard.”

“Moving forward, LC remains steadfast in being mission driven and vision focused as we build on the solid foundation of a Christ-centered comprehensive liberal arts education, with a vision for preparing graduates and transforming lives,” Brewer emphasized during a news conference at Granberry Conference Center.

“Embedded in the fiber and fabric of the college is our commitment to a broad-based strategic plan for academic enhancement, faith integration and student learning,” he continued. “The framework for all this is our passion for being relational, relevant and rigorous.”

During the process of responding to SACSCOC, Brewer consulted well-known Southern Baptist educator Bob Agee, former president of Oklahoma Baptist University, who also had to deal with navigating the unique shoal waters the government accreditation process presents to Christian institutions of higher education.

In a written statement, Agee was upbeat about the leadership of the school and its direction.

“Dr. Brewer and the Board of Trustees are to be commended for their diligence and hard work in assuring that LC meets the highest possible standards and expectations of our accrediting bodies,” he said. “LC is now poised for some of the best days of growth, progress, and achievement in its illustrious history.”

Reactions from around the campus and the state were equally enthusiastic.

“To hear the school is no longer on probation is a great relief to me,” Paige Dubois, an LC sophomore social studies major, said at the press conference. “The lifting of this probationary status simply affirms what students and faculty of already know about Louisiana College … its academic standards are high, its programs are rigorous, and it gives wholeheartedly and freely to students and all members of the Louisiana College family.”

Jerry Pounds, professor of psychology, offered, “The entire LC family is grateful and so very excited to hear this word today.”

Pounds thanked Brewer and interim Vice President for Academic Affairs Cheryl Clark and others “for taking the lead and taking charge” to make this day possible.

“This is a significant achievement for LC,” he said, as well as for the community, alumni, and parents of students. The lifting of probation is “an announcement of great magnitude” and “it validates our commitment to meet a set of researched based standards … and to school improvement through self-evaluation and peer review.”

Pineville Mayor Clarence Fields congratulated Brewer in a follow-up question and answer session, saying the school’s announcement was “important to our community and our state.”

Philip Robertson, pastor of Philadelphia Baptist Church in Deville, said, “As a pastor, I am grateful that we can recommend this school to our students, knowing that not only will they get a high quality academic degree, but will also receive it with a biblical worldview perspective. We are extremely proud of Louisiana College and extremely grateful to God for the announcement today.”

Rick Ranson, a 1975 alumnus of LC, a member of the newly formed LC Board of Visitors member and vice president of Major Employers at the Central Louisiana Economic Development Alliance, said, “Two words come to my mind as an alumnus. Thank you and hallelujah,” he said.

He thanked LC employees and students for “persistence” and for “remaining faithful to the school.”

Randy Harper, LC’s chairman of the board of trustees, sent a statement to the college earlier in the day which read: “This is fantastic news, and it’s a great day for Louisiana College. It also is confirmation that we found God’s man for the tasks at-hand and ahead for LC. The probationary sanction has been weighing on the college, but today, God showed us great favor. Now we can focus on even more things for the college’s future. Our best days are still ahead of us.”

Harper, pastor of Bellaire Baptist Church, Bossier City, added, “When we were searching for our next president, we sought someone who knew higher-level academia inside and out, who knew how to work with a faculty, who had established new degree programs, and who knew how to work with SACSCOC and accreditation issues. We also sought someone who believed in the authority and inerrancy of the Bible. Clearly, God gave us exactly the right man.”

LC trustees unanimously elected Brewer as president in March 2015. Brewer succeeded Joe Aguillard, who presided over the college from 2005 to 2014.

By Lane Corley Olive trees produce one of the most desired and sought after fruits around the world. The trees can live for thousands of years. The olive and the olive tree is spoke of in the Bible on numerous occasions. Including a few references to family life, like in Psalms 128:3 – “Your children will be … END_OF_DOCUMENT_TOKEN_TO_BE_REPLACED