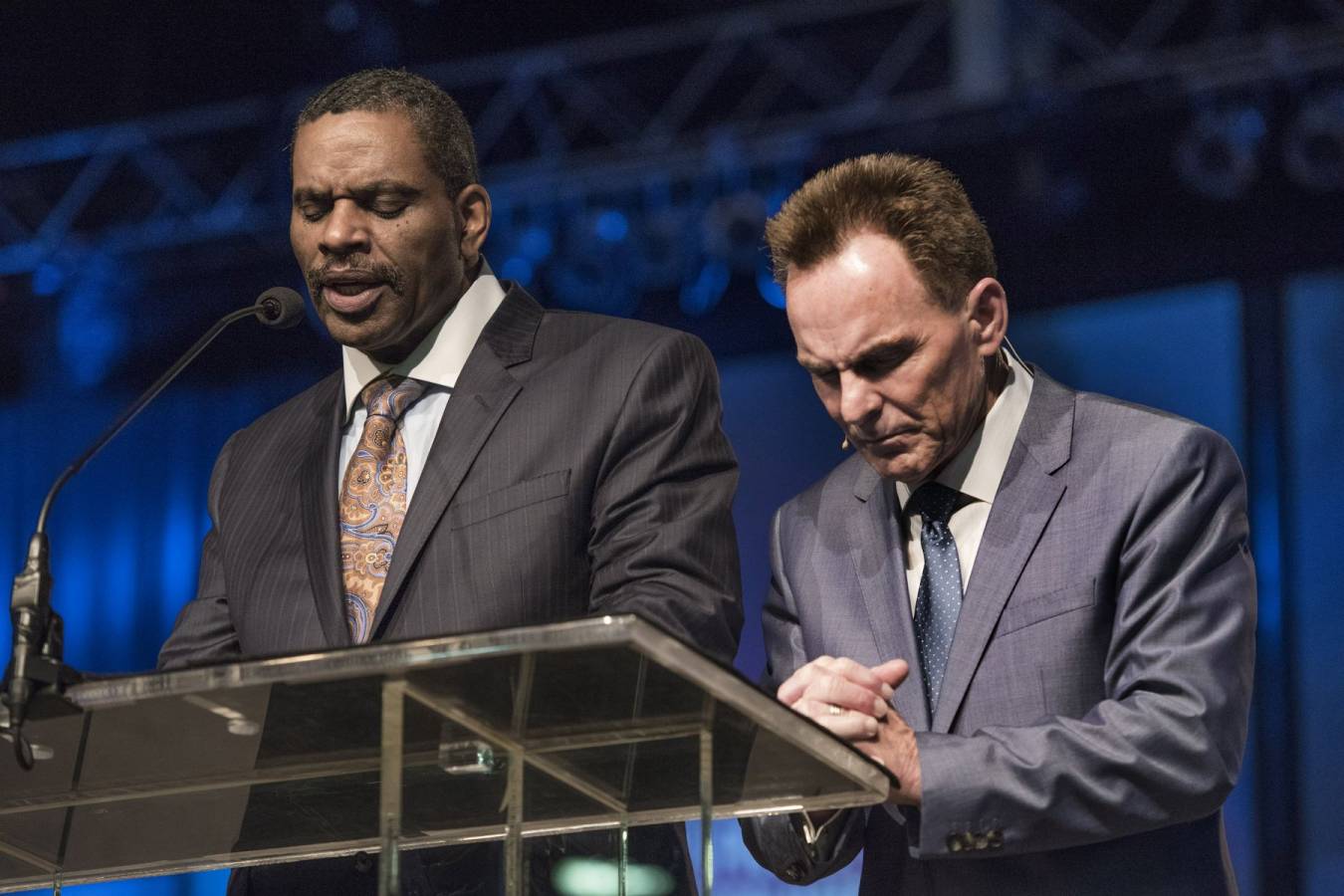 K. Marshall Williams, left, senior pastor of Nazarene Baptist Church in Philadelphia, prays next to Ronnie Floyd, president of the Southern Baptist Convention, during the June 16 evening prayer session of the SBC annual meeting at the Greater Columbus Convention Center. They are among the pastors calling for unity following the massacre in South Carolina.

“Everyone together — white, black, Hispanic, everybody — we’re coming together in unity to see this not only [as] an attack on people, but an attack on the body of Christ,” said Biggs, associate pastor of Citadel Square Baptist Church, which neighbors the site of the crime. “I mean, who can walk into a church and sit for an hour and have prayer, and then just begin to kill everybody?”

In what police are calling a hate crime, a man identified as Roof sat calmly in the church during the prayer service and without notice shot worshippers and fled the scene. The church’s pastor, state Sen. Clementa Pinckney, was among those killed, but the names of other victims — six women and three men — had not been released. A 5-year-old child escaped murder by pretending to be dead, and a woman was purposely allowed to live so that she could tell police what had happened, it was widely reported.

“As everybody said on TV, it goes deeper than just hate. To me, this is something that’s very demonic to be able to do that. It’s a big spiritual warfare, so we’re coming together,” Biggs said. “We’ve just got to pray and seek direction, see how we can help one another, see how we can pray to get this action and so forth out of here. Everybody is very calm right now and just looking for answers.”

Biggs said the two churches have a growing friendship and that the Baptist church loaned Emanuel AME the use of its parking lot during a funeral a few weeks ago, as the churches are in the same block.

“The parking in Charleston is just very hard for everybody. They knew they had a lot of people coming in. Right after that happened, Bro. Pinckney had written us a card, just of his appreciation and so forth. So we had a connection where we worked together as a church in the resources that we had,” Biggs said. “We’re down here today, everything is shut down because of all of the security, but we have already contacted one of their members, Charles Williams, who’s a friend of mine … who happened not to be at the meeting, but was out of town on vacation. And we let him know … that our church is available for anything that they need at any time.”

“Sunday we will make sure that our membership will come together and pray [during] a portion of our service,” Biggs said, “and then again we will sit down as a church and put our heads together to see what we can do to extend even more in the days, weeks and months to come.”

Both churches have security systems, Bigg said, and the Baptist church “will revisit everything to make sure everyone is protected.”

“Just be praying for us,” Biggs requested.

The SBC has placed a renewed emphasis on prayer for spiritual awakening, and included a nearly three-hour prayer service June 16 during its annual meeting in Columbus. South Carolina Gov. Nikki Haley also hosted a citywide prayer meeting June 13 in Charleston.

“This last Saturday we had 5,000 or so in our coliseum for statewide prayer,” Biggs said. “We’re in the middle of [spiritual warfare], but God is faithful and He will come out on top. We’ve just got to be faithful, strong and trusting.”

Haley posted a statement on her website after the tragedy.

“Michael, Rena, Nalin and I are praying for the victims and families touched by tonight’s senseless tragedy at Emanuel AME Church,” Haley wrote. “While we do not yet know all of the details, we do know that we’ll never understand what motivates anyone to enter one of our places of worship and take the life of another. Please join us in lifting up the victims and their families with our love and prayers.”

We stand today in solidarity with our brothers and sisters in Christ in Charleston, South Carolina. The brutal massacre of those in prayer at Emanuel African Methodist Episcopal Church should shock the conscience of every person. There is hardly a more vivid picture of unmasked evil than the murder of those in prayer.

This act of bloodshed is wicked and more than wicked. It is literally satanic, as our Lord taught us that the devil is a “murderer from the beginning” (John 8:44).

Virtually every week we see yet another incident pointing to the sin of racism in American society, from unarmed African-American men and children killed in the streets to worshippers gunned down in their pews. This must end. And the church of Jesus Christ must lead the way.

The church should picture to the outside world what it means to be reconciled to God and to one another. We must embody the truth that we are all created in the image of God and that those of us in Christ have been brought near to God by the blood of Jesus. We share in common a table of fellowship, an indwelling Spirit, and an inheritance that we will share, together, forever. Death cannot hold these truths back.

Since the gospel is true, we should speak and work as the church for racial justice in the public arena and for racial reconciliation in our own communities. This is not merely the cause of African-American Christians but of all Christians.

Our hearts are broken as we hear the unfolding news from the shooting in Charleston, South Carolina. As a former South Carolinian, I so love that state and I’m deeply burdened from what I have heard. I have called friends in South Carolina to make sure that they are providing personal ministry in this situation. Our South Carolina Baptist convention partners are deeply involved.

Our prayers are with these families and this dear church. For this unspeakable act of violence to occur during a prayer meeting is unconscionable. May God be the source of healing and hope.

The news of the tragic shooting in Charleston at the Emanuel AME Church breaks my heart and that of our leadership in the South Carolina Baptist Convention. This act of violence against our brothers and sisters in Christ is deplorable and evil, and appears to be anti-Christian. We stand with our brothers and sisters in prayer and in Christian love and sorrow. We stand ready to assist this church and its members where their beloved Pastor and District 45 State Senator, Reverend Clementa Pinckney, was killed. Our leadership is calling our South Carolina Baptist Convention staff to a time of prayer today, and we are calling on all of our 2,138 churches and church leaders to join us in prayer and support of our fellow Christians in Charleston. We stand ready to assist in any way possible and will be investigating how we can assist in any way.

The violent acts of unspeakable evil committed by this young man on Wednesday evening in one of our sacred houses of worship is evil and deplorable beyond words. He obviously needs the prayers of Christians. The appearance of such a tragedy in a Christian church in South Carolina is a wake-up call for the need of Christians all across the state and America to stand heart to heart and hand to hand in total rejection of such horrendous acts of violence upon anyone, particularly Christians. I would request that any Christian anywhere would join us in prayer and support for this wonderful church and church family in Charleston. Let’s be praying for all the families who have been touched by this tragedy.

By Stewart Holloway PINEVILLE, La. - Recently, a former church member messaged me for prayer. The situation is devastating, and Rebecca and I are covering it in prayer. To be asked to join this individual in prayer as a former pastor and friend was a humbling blessing. Other than a social media comment here or … END_OF_DOCUMENT_TOKEN_TO_BE_REPLACED