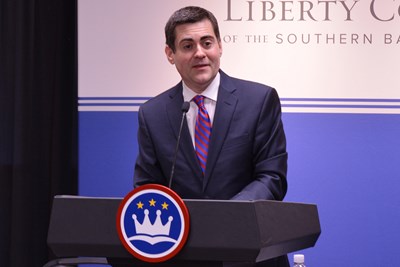 Russell Moore speaks during a meeting of the Ethics & Religious Liberty Commission.

NASHVILLE, Tenn. (LBM) – Russell Moore, president of the Ethics and Religious Liberty Commission, announced on russellmoore.com, May 18, he had “struggled with the decision” but that he was leaving his position with the Southern Baptist Convention to join Christianity Today as “public theologian and as director of a new venture, the Christianity Today Public Theology Project.”

Moore had served since 2013 as head of the Nashville, Tennessee-based ERLC. Prior to that he was “provost and dean of the Southern Baptist Theological Seminary in Louisville, Kentucky, where he also taught theology and ethics,” according to his website.

Sharing his gratitude for the opportunity to serve Southern Baptists, he made special mention of his work on “national conferences such as MLK50 and Caring Well” as well as “a string of special successful engagements on matters of public policy.”

He also praised his team for their “work of evangelism and cultural engagement.”

Moore was staunchly pro-life during his eight-year tenure. One of his special emphases was providing ultrasound machines to pregnancy care centers through the ERLC’s ongoing Psalm 139 Project. The sonograms these medical devices produce have been exceptionally effective at convincing women to choose life for their unborn children. The ERLC is on pace “to place between 20 and 25 machines in Tennessee and beyond during 2021,” according to Baptist Press, May 18.

As the national public policy voice for Southern Baptists, Moore had established a working relationship with the Obama Administration but had opposed Donald Trump’s presidential candidacy because of Trump’s highly publicized moral failures. His disdain for the former president extended also to Trump’s evangelical supporters, who largely backed Trump, despite his flaws, because of his pro-life promise and commitment to appoint conservative judges.

Although he made two highly publicized apologies for his criticism of fellow believers, Moore’s relationship with rank-and-file Southern Baptists as well as many prominent SBC pastors did not appear to recover.

More recently, the ERLC had filed a flawed amicus brief with the U.S. 5th Circuit Court of Appeals in McRaney v. North American Mission Board, wrongly describing the SBC as a “hierarchy” that serves as an “umbrella Southern Baptist governing body over all the various groups of churches.”

In February, the SBC Executive Committee, a Nashville, Tennessee-based entity, which is charged by the SBC Bylaws to “act in an advisory capacity on all questions of cooperation,” accepted a report from a task force which found: the ERLC is both “appreciated” and a source of “significant distraction”; ERLC’s handling of the controversial amicus brief was “unacceptable”; without quick and significant changes by the ERLC, there is “the potential for a measurable [CP] decline in the near future and beyond”; and noted that there is “considerable conversation … as to whether the ERLC is the most effective and efficient structure and means for addressing the public policy concerns of Southern Baptists.”

Baptist Press reported May 19 that Moore’s resignation would be effective June 1.

By Rebecca Holloway PINEVILLE, La. – For years, I have read and heard the statement, “We need to hold life/our family/our possessions with an open hand.” The idea is that we are not in control of our lives or anything else on this planet. God is in complete control of all things and has the power and right to … END_OF_DOCUMENT_TOKEN_TO_BE_REPLACED