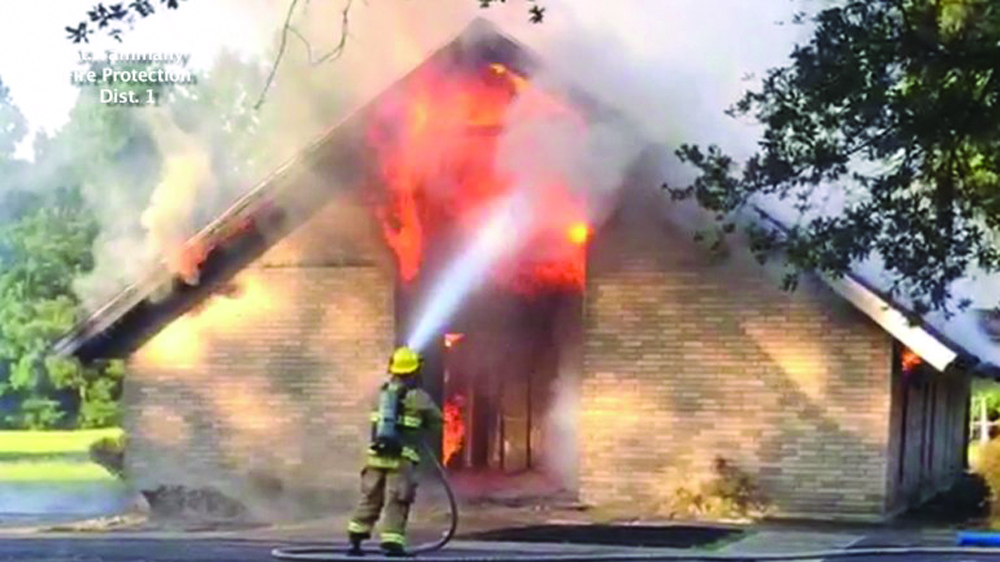 The reward for information on a second suspicious fire at Bayou Baptist Church in Slidell in the past 10 months has been increased to $10,000 as law enforcement seeks information.

SLIDELL – Bayou Baptist Church Pastor Frank Treme is hoping a $10,000 reward will finally help solve the mystery of who set fire to his church for the second time in 10 months.

Earlier in the month, Crimestoppers offered a $5,000 reward for information leading to the arrest and conviction of an arsonist who burned down the church. The U.S. Bureau of Alcohol, Tobacco, Firearms and Explosives announced July 21 that it was giving Crimestoppers another $5,000 to help capture the guilty party.

Treme said even though the fire destroyed one of the church buildings, his congregation holds no malice toward the arsonist.

“What good would it do for me or my congregation to hate someone?” Treme said. “That would go against what we believe and what the Word of God says.”

Treme said the congregation continues to pray for strength and guidance, and seeks for prayers from others as well. Members have stayed committed, and the church has even gained some members since the last fire.

The latest fire occurred on July 2.

After a neighbor called 911 to report flames engulfing the church, firefighters arrived in just over two minutes after the 7:30 a.m. call to find flames leaping from the front and rear of the 2,500 square foot building and heavy smoke enveloping the structure. The fire department was able to extinguish the fire in about 15 minutes without any injuries to the response team and determined the building was a total loss.

The church, which was vacant and did not have electricity, was in the process of being renovated from a fire that happened in October 2015. The latest fire occurred in a section of the church property which did not affect ongoing renovations to another building on the campus.

Treme said renovations should be complete by early January 2017. The 6,200-square-foot facility will house a worship center and Sunday school classrooms.

“We’re not giving up,” Treme said. “To do that would mean they win and we lose.”

The ATF, Louisiana Fire Marshal’s Office, Slidell Police Department and St. Tammany Fire Protection District No. 1 are investigating the firest. Anyone with information that could lead to the arrest of the arsonist should contact ATF at 888.283.3473, Crimestoppers at 877.903.7867 or Slidell police at 985.646.4347.

By Joe McKeever Freely you have received; freely give. (Matthew 10:8) JACKSON, Miss. (BP) -- Dr. Watson was complimenting Sherlock Holmes on a brilliant observation no one else had noticed. "Of course," Holmes remarked. "It's what I do." Forgiveness and grace -- that's what we believers do. Here is … END_OF_DOCUMENT_TOKEN_TO_BE_REPLACED