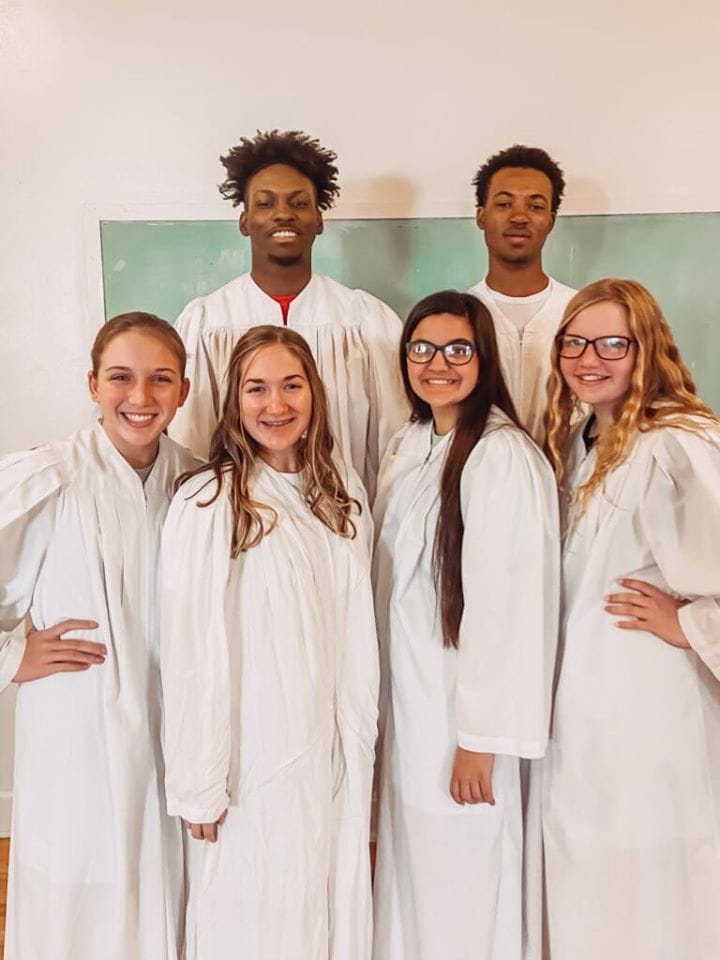 Six students who attended the FOCUS 2020 revival were baptized at the First Baptist Church in Oakdale Feb. 2, 2020. Submitted photo

GLENMORA (LBM) – Cadence Fontenot frequently viewed her life through a dark lens, but an encounter with Christ during the Focus 2020 revival at Glenmora High School gave her a new perspective on life.

At the challenge offered by evangelist Ken Freeman “to live for Christ,” Fontenot repented for salvation, turning from her sins and giving her life to Christ.

She was among 80 new converts who proclaimed Jesus as Lord during the revival, Jan. 18-20.

Fontenot later joined five other members of the youth group at First Baptist Church in Oakdale, Feb. 2, for a baptismal celebration service. All six students had placed their faith in Christ during Focus 2020.

“Before I gave my life to Christ, I thought negatively about everything and was never happy,” Fontenot said. “My pastor, youth pastor and Sunday school teacher had been working to prepare me for about a year, and when I finally gave it all to God, I was changed and felt love like never before.”

Each night during the revival, Freeman shared messages of hope to more than 500 people who gathered inside Glenmora High School’s auditorium.

“We are always one choice away from a different life,” Freeman told the crowd. “You listen to the wrong voice, you make the wrong choice.”

Prayer was an essential element of the harvest, Jerry Johnson told the Baptist Message.

The mission strategist for the Mount Olive Baptist Association said area churches prayed for the gathering several months ahead of the event, and congregants served as counselors at each revival service.

“It was awesome,” Johnson said. “This revival has already begun to impact students at schools like Oakdale, where several students were recently baptized. God sent Ken Freeman to those schools to share encouragement and many of them returned to hear his invitation to accept Christ during the revival services. My prayer since then is it that what happened last month impacts the schools and homes for Christ.”

Church members from the association also hosted sports clinics in Glenmora and Oakdale. Freeman said he is excited about how God moved and prepared the communities in Mount Olive Baptist Association for a continued movement of the Holy Spirit.

“The churches came together and worked together for the goal of seeing their community members accept Christ,” Freeman said. “When you preach the Word, it’s neat to see the Holy Spirit move. It’s very powerful to see how it all came together and I got to water seeds that were planted.”

By Joe McKeever Freely you have received; freely give. (Matthew 10:8) JACKSON, Miss. (BP) -- Dr. Watson was complimenting Sherlock Holmes on a brilliant observation no one else had noticed. "Of course," Holmes remarked. "It's what I do." Forgiveness and grace -- that's what we believers do. Here is … END_OF_DOCUMENT_TOKEN_TO_BE_REPLACED