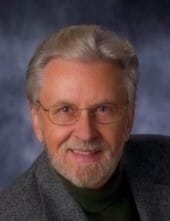 He was born in Brownwood, Texas on July 6, 1936, to Lee and Audrey Mae Ramsour. His father was a Southern Baptist minister and the family lived in several places during his formative years. Larry graduated from Tahoka High School in 1953 and attended Baylor University, where he married Valetta Stripling. He received his Bachelor’s degree from Baylor University and his Masters of Divinity degree from Southwestern Baptist Theological Seminary. He and Valetta moved to Navarro Mills in 1961, where he pastored his first church and she taught school.

His daughters, Michelle and Marcelyn, were born in 1964 and 1968. From her Daddy, Michelle inherited his love of photography, plants, flowers and piano, his sense of creativity, attention to detail and prankster tendencies. Marcelyn inherited from her Daddy his sense of optimism, his patriotism, his spirit of determination, his love of music and animals, and his talent at Words with Friends. They both learned from him that in every situation, there is always something for which to be grateful. When their husbands, Jeff and Carl, became family he sought to teach them how to make his special gumbo recipe, and he loved them, too.

Larry served as pastor at Baptist churches in Jacksonville and Troup, Texas and in Farmerville and Lake Charles, Louisiana. With a move to Winnsboro, Texas in 1979, he began his evangelistic work, preaching and ministering to many congregations. He began his worldwide mission work in 1986.

Larry changed his name to Gramps upon the birth of his first grandson, Eli. Audrey, Julia, David, Matthew and Catherine also called him their Gramps. He cherished his six grandchildren and enjoyed their individual personalities. However, the challenge he faced with his grandchildren was apparent each time he tried to capture the attention of each one during a holiday family photo on the front porch. He was mostly successful.

Larry and Valetta traveled extensively, but his favorite destination was Colorado, where he enjoyed off-roading and camping in his Jeep. His hobbies included photography, oil and water color painting, reading, woodworking and landscaping his beautiful yard. Countless hours were spent studying God’s Word. He greatly enjoyed sugar cookies, cherry pie and a good cup of coffee. He was also very fond of his cat, PuppyDog.

Near and dear to his heart was the ministry partnership with his friends in Nepal. His divine encounter with a pastor from this region began a 34-year bond and friendship. During this time he traveled to Nepal and used his ministry at home to raise awareness and financial support for the growing Christian churches there. He continued with this endeavor, studying God’s Word and serving the Lord, until his death at the age of 84. Larry loved people and had a generous heart.

Those who cherish their time spent with him are his beautiful and devoted wife of 64 years, Valetta; daughters, Michelle Springer and husband Jeff and Marcelyn Hamm and husband, Carl; his sister, Betty Reed; grandchildren, Eli Springer and wife Hayley, Audrey Springer, Julia, David, Matthew and Catherine Hamm; and much-loved cousins, nieces, nephews and extended family and friends.

In lieu of flowers, the family requests that any memorial gifts be sent to LREA Ministries. PO Box 68 Winnsboro, Texas 75494.

A memorial service was held Sept. 24 at Oaklawn Memorial Park in Athens.

By Chuck Kelley Rarely does Hollywood contact a Southern Baptist seminary, but rarely is not never. One day location scouts for a major motion picture to be filmed in New Orleans called NOBTS and asked to tour the campus. They were looking for a place that with a bit of movie magic could be made to look like the … END_OF_DOCUMENT_TOKEN_TO_BE_REPLACED