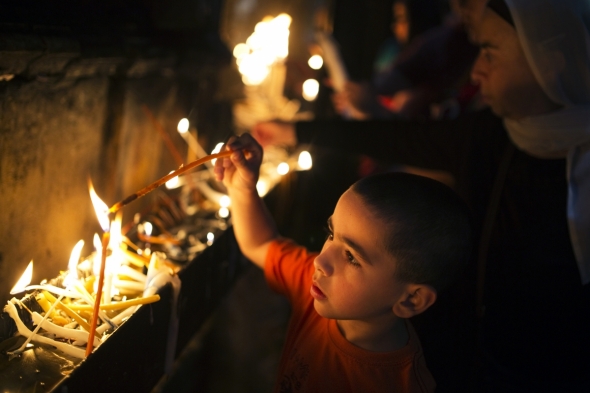 A Christian boy lights a candle inside the Church of the Holy Sepulchre before the 2014 Easter Sunday mass procession in Jerusalem's old city. Photo by Amir Cohen/Reuters

JERUSALEM (Christian Examiner)—Three often competing Christian groups have committed to work together to save one of Christianity’s most treasured sites—the shrine to the empty tomb of Jesus housed in Jerusalem’s Church of the Holy Sepulcher.

Leaders of the Greek Orthodox, Armenian Apostolic and Roman Catholic churches announced last month a $3.4 million renovation effort that will begin in May. The three churches will split the costs evenly (along with some private and public contributions). Each of the three will also appoint architects to help. The work should be done by early 2017, before the next Easter season.

By David Jeremiah EL CAJON, Calif. (BP) - Something strange happens to the psyche of a nation in difficult times. The downtrodden begin to resent government and wealthy corporations and individuals, seeing them as out of touch with, if not the cause of, their plight. Desperation can lead to a reversal of … END_OF_DOCUMENT_TOKEN_TO_BE_REPLACED