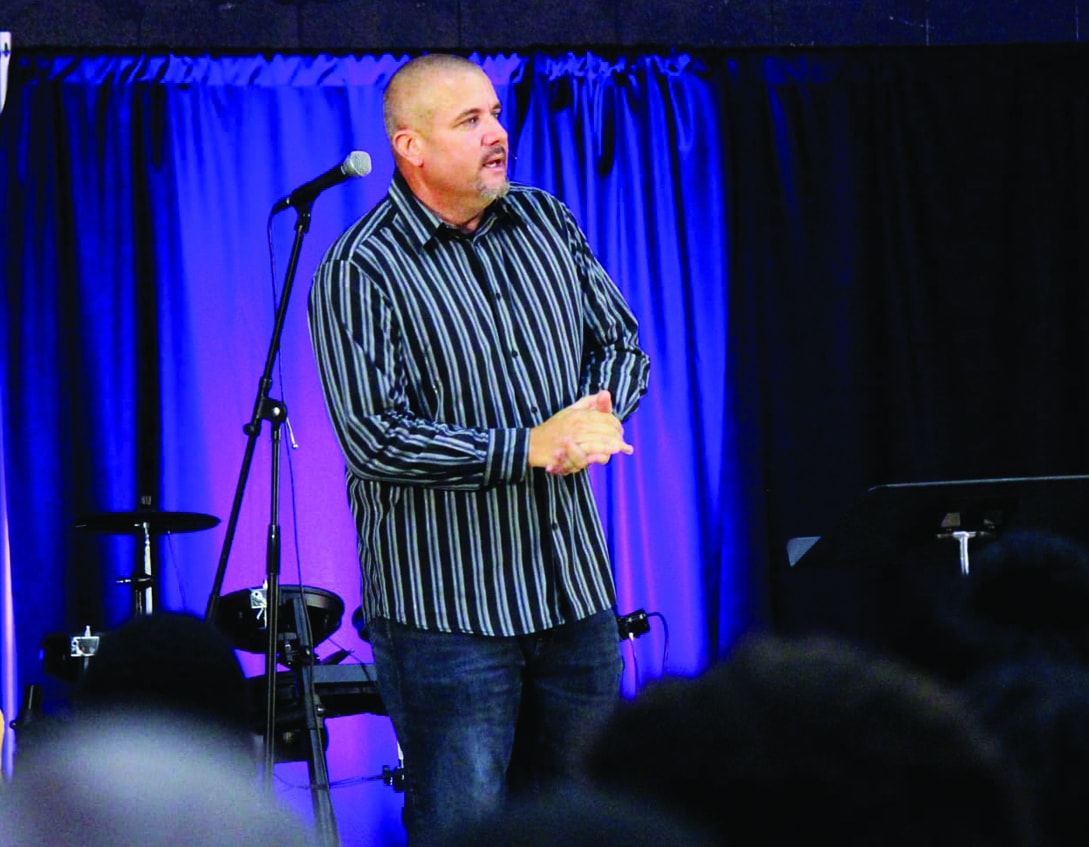 ALEXANDRIA –To say, “Checkerz Williams did not grow up in the church,” is at best an understatement.

According to Williams, his father left when he was born and he was raised by his teenage mother. Growing up in Las Vegas he became addicted to alcohol and had a propensity to get in fights, which eventually led to him being evicted from his home at the age of 19.

“I didn’t know what else to do so I reached out to my biological father, whom I’d only seen a few times in my life,” Williams shared. “By this time he had remarried, had two other children and was getting ready to move back to North Carolina. So I moved there and began to work in construction.

“While working, my boss, who resembled the TV character Grizzly Adams, would share the Gospel with me,” he continued. “I rejected it at first, thinking ‘Where was God when I was going through all this pain in my life?’ But eventually the Lord softened my heart and I surrendered to my life to Him in November of 1992.”

Prior to becoming a Christian, Williams enjoyed rap music.

He first thought he might have to give up rap, but his boss encouraged him just to change the message of his music and, as examples, shared with Williams a few songs from some early Christian rap groups.

Soon after he made changes to his lyrics, people began to take note of his faith-friendly messages and he was invited to share about his Christianity before the beginning of some concerts. This set off a chain of events that led Williams to ask his pastor, “How do you know the Lord is calling you into ministry?”

Upon surrendering to God’s call, he applied to Gardner-Webb University, a Southern Baptist school, where he met his wife, Nicole. For the next 15 years Williams traveled the country rapping, preaching and sharing the Gospel until he sensed God was leading him in a different direction.

“I was asked by a church to help them structure an outreach program for the community,” said Williams. “It was an African American congregation in a predominately White and Hispanic area.

“This took us to South Carolina where we lived and did ministry in that city, and all around the Carolinas, for nine years,” Williams continued. “Nicole and I also worked in the corporate world and were doing very well in our careers. During my time at a local bank, one of the tellers asked me, ‘What are you doing here? This is obviously not your calling.’”

As God was working on his heart about becoming a pastor, Williams began to reflect on how disheartening it was so see the church so segregated.

“I was invited to go to an all-White church or an all-Black church, but as I continued to read God’s word, it says every nation, tribe and tongue gathered around the throne to worship. So God gave me a vision of what that would look like on earth.”

Fast forward to 2017 – Williams and his wife left their careers and he enrolled at New Orleans Baptist Theological Seminary with the vision of planting a multi-ethnic, multi-generational church. In July 2017, that opportunity presented itself when Lane Corley, church planting strategist for Louisiana Baptists, told him there was a great need for a multiethnic church in Baton Rouge.

“I went home and shared this with Nicole and her response was ‘Why not you?’” For several weeks the couple drove around Baton Rouge praying for wisdom, direction and conﬁrmation.

“The Lord made it clear and gave us a heart for the city,” said Williams. “We didn’t know what to call the church,” he said, “we wanted the name of the church to have some meaning and not simply come across as hip or cool. God brought me to Romans 12:2 where Paul challenged those early believers to be transformed by the ‘renewing’ of their minds. At the same time Nicole had written down and crossed out several names in her journal. When she showed me the one she circled, ‘renewed,’ we knew what God wanted to call this new work.”

From weekly vision meetings and a formal launch in south Baton Rouge to a move across town to the gym of Florida Boulevard Baptist Church in mid-2018, the Lord has greatly blessed Renew Church.

“We’ve grown from about 30 to as many as 90 in attendance and we’ve already baptized eight people!” Williams exclaimed.

By Waylon Bailey One of the most exciting stories in the life of Jesus occurred in his home town of Capernaum. As Jesus taught in what may have been the house of Simon Peter, four men carried their paralytic friend to the rooftop, tore the roof away, and lowered their friend right in front of Jesus. You … END_OF_DOCUMENT_TOKEN_TO_BE_REPLACED