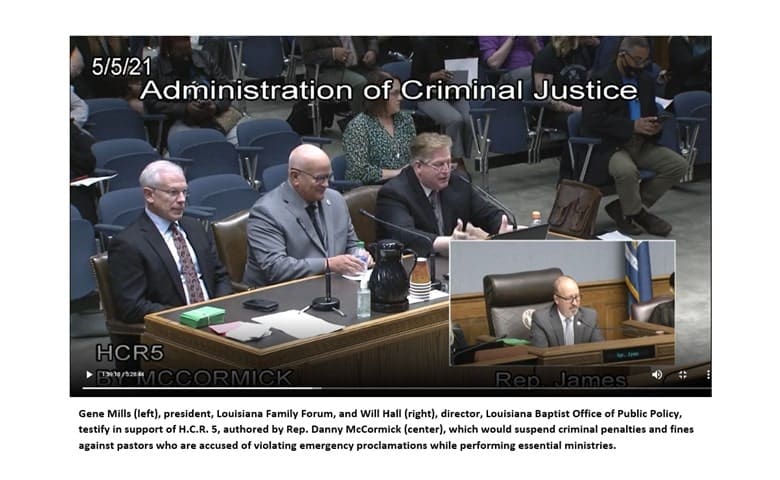 BATON ROUGE, La. (LBM) – A resolution to protect pastors from civil and criminal penalties for doing essential ministry during an emergency order has moved forward by a vote of 7-4 out of the House Administration of Criminal Justice Committee.

McCormick invited Gene Mills, president of Louisiana Family Forum, and Will Hall, director of the Louisiana Baptist Office of Public Policy, to join him in advocating for the measure before the committee.

Hall said the governor’s office was active in seeking inputs from Louisiana Baptists, the largest non-Catholic religious body in the state, during the 2020 COVID-19 pandemic, regarding the implementation of emergency orders. But he said the resolution offered to de-escalate situations where a conflict might arise from a pastor doing essential ministries during emergency proclamations.

“This is a way, by just taking away the penalties, of avoiding escalation in a situation that can be worked out by reasonable people,” Hall explained.

Meanwhile, Mills testified about the importance to Christians of gathering during an emergency.

“It is precisely during an emergency that people of faith intuitively assemble to pray; to encourage their impacted communities; and to marshal the resources to respond effectively,” Mills said, citing the instances of Hurricanes Katrina, Gustav, and Rita, as well as the floods of 2016, and the responses each time of pastors in the Louisiana Family Forum network to aid the state.

Mills also pointed out the barriers to pastors from performing essential end-of-life pastoral care in hospitals during the COVID-19 pandemic.

“We’re willing to work within some guided protections and even some restrictions,” Mills offered. “We just think the criminal provisions and restrictions ought to be released, and we ought to be treated as first responders — just as we’ve demonstrated in the past that we’re capable of doing.

Three witnesses offered testimony about matters not actually contained in the bill, but germane to the First Amendment freedom to express religious beliefs – a related topic. Some committee members tied this portion of the testimony to a controversy last year with a Baton Rouge pastor who defied the state shelter-in-place order and was subsequently charged and jailed.

By Rebecca Holloway PINEVILLE, La. – For years, I have read and heard the statement, “We need to hold life/our family/our possessions with an open hand.” The idea is that we are not in control of our lives or anything else on this planet. God is in complete control of all things and has the power and right to … END_OF_DOCUMENT_TOKEN_TO_BE_REPLACED