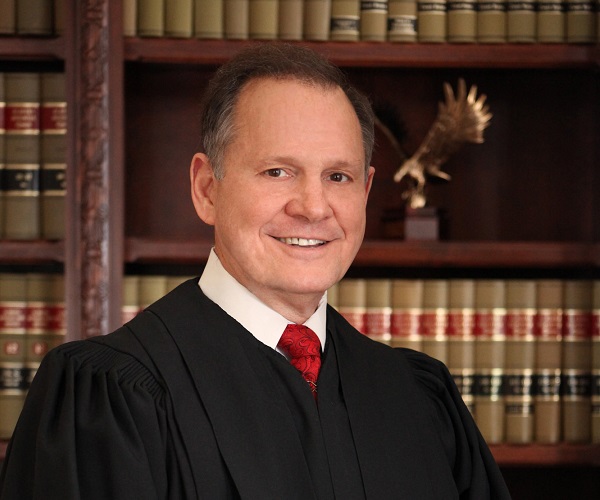 MONTGOMERY, Ala. — America is undergoing a sexual revolution that is defying “God’s natural order” and will leave young children confused about whether they should be a boy or a girl, Alabama Chief Justice Roy Moore warned members of a Baptist church in his state this week.

Moore made the comments at Magnolia Springs Baptist Church in Theodore, Ala., a day after speaking to members of the Fresh Anointing House of Worship in Montgomery.

Christians may be upset over the Supreme Court’s controversial decision, but the primary “issue is not about same-sex marriage,” he said, according to Al.com.

“It’s about a sexual revolution. It’s about having people decide whether they are male or female,” Moore said, speaking the same week that Bruce Jenner, now known as Caitlyn Jenner, received the Arthur Ashe Award for Courage at the ESPY’s. “You’re talking about overturning God’s natural order.”

Moore expressed concern over what happens “when you start teaching kids that they have the right to choose whether they are male or female.”

“They don’t know much. [But] they may learn fast,” Moore said. “And when they get in their mind they can be a man if they’re a girl or a woman if they are a boy, I don’t know what the end is going to be. Except it will come down to things like when you take your little girl to the girl’s bathroom and you wait outside and you see some guy with hairy legs going into that bathroom, what are you going to do? What are you going to do? Are you going to stand back and let that guy go in the bathroom with your little girl?”

He told the Fresh Anointing House congregation: “America is under attack.”

“Maybe we have forgotten God,” Moore said. “Maybe we’re tired of him too; tired of recognizing there is a higher being.”

America may be under attack, but so is religious freedom, Moore added.

“In 2015 when they make same-sex marriage a fundamental right they put actions behind it,” he said. “…They say every probate judge must issue a license; every cake baker must bake a cake; every photographer must take a picture; every decorator must arrange flowers. What I am trying to tell you is this: we just suffered a loss of religious liberty.”

As people shouted “no!” Moore responded, “Well are you prepared for the consequences? There will be consequences.”

Moore was elected chief justice in 2012, nine years after being ousted by a judicial panel for refusing to remove a Ten Commandments monument as ordered by a federal judge. Moore’s conservative views have long been well-known, but his position as chief justice of the state’s highest court make them more significant.

America, Moore said, was founded by Christian men on biblical principles. He quoted a letter John Adams wrote on July 3, 1776, which said, “It ought to be commemorated, as the Day of Deliverance by solemn Acts of Devotion to God Almighty.”

“God” was placed in the Pledge of Allegiance and in the national motto when Moore was growing up, but today God is being taken out of various forms of life – including out of marriage, Moore said.

“How do they come out now and say that marriage, which is ordained by God, doesn’t mean what it’s always meant, between a man and woman?” Moore said at the Baptist church, referencing the U.S. Supreme Court. “Not between two men, two women, or three women and one man. See, they don’t have a definition. They’ve just destroyed the institution of God. Despite what they think, it’s not their doing. Satan drives us. He’s out there destroying everything God created including us as human beings.”

Americans have been taught that “somehow Christianity is bad for our country” and that government can’t have anything to do with Christianity.”

“Religious liberty is for everybody,” he said. “But you’ve got to recognize a particular God. You can’t recognize Mohammed because Mohammed doesn’t give you religious liberty. Mohammad enforces, they enforce Islam through the state. That’s why this country is so different. You don’t enforce Islam or any other religion. You don’t enforce Christianity. Christianity is not something you can enforce. But you can encourage it. But you can’t establish one sect of Christians over another.”

By Rebecca Holloway PINEVILLE, La. – For years, I have read and heard the statement, “We need to hold life/our family/our possessions with an open hand.” The idea is that we are not in control of our lives or anything else on this planet. God is in complete control of all things and has the power and right to … END_OF_DOCUMENT_TOKEN_TO_BE_REPLACED