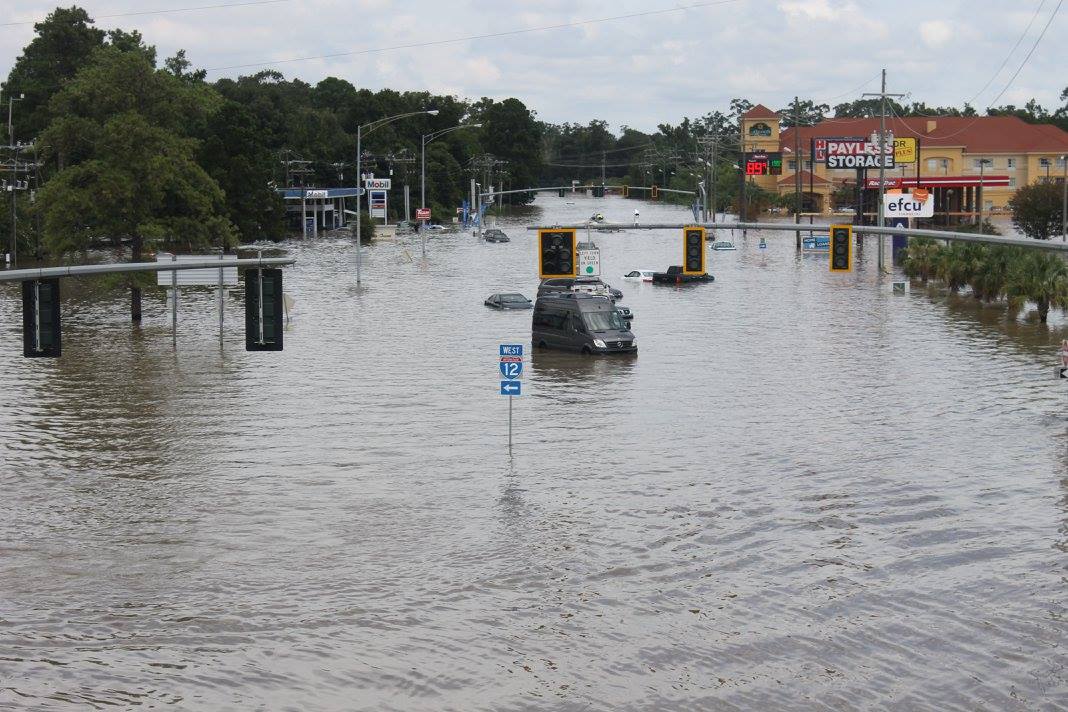 A look at O'Neal Lane north from Interstate 12 in Baton Rouge shows water covering the roadway.

For the people of South Louisiana, when it rains, it pours.

For the second time in five months, historic flooding has left widespread devastation and suffering through south Louisiana. As of Sunday afternoon, four people have been killed in the flooding, thousands have been displaced and thousands of homes, businesses and churches have been affected by the flooding.

According to the National Weather Service, more than 15-18 inches of rain fell in southeast Louisiana beginning Friday.

Some areas, though, received even more.

Tangipahoa Parish to Baton Rouge got 15 to 20 inches or more, with some recording up to 27 inches of rain. In a 24-hour period, Baton Rouge had as much as 11 inches while one weather observer reported more than 17 inches in Livingston Parish.

Over a two-day period more than 20 inches of rain fell in the Acadiana area according to the National Weather Service.

Louisiana Governor’s Office of Homeland Security and Emergency Preparedness estimates more than 5,000 people have had to stay in shelters Saturday evening. Over 1,000 vehicles – with people inside — were stranded on Interstate 12 between Baton Rouge and Covington. Traffic has just begun to move late Sunday afternoon.

The unprecedented flooding has caused four nursing homes to be evacuated in southeast Louisiana with an additional 7,000 people having been rescued by first responders. Rescue efforts, though, have been hampered due to major outages by AT&T.

Gov. John Bel Edwards, who along with his family were forced to leave the Governor’s Mansion when chest-high water filled the basement and electricity was shut off, declared a state of emergency Friday morning, Aug. 12, and the Louisiana National Guard has deployed 1,700 members with another 800 expected to mobilize in the coming days according to GOSHEP.

The Governor and his family relocated to a state police facility in the Baton Rouge area.

“This has never happened before,” said Edwards.

The Louisiana Department of Transportation and Development says there have been over 300 road closures since the flooding began and more than 1,400 bridges will have to be inspected before they are open to truck and car traffic.

According to WWL Radio in New Orleans, all major roads to the west of New Orleans are blocked. The station reported there is currently no good way to get between New Orleans and Baton Rouge or Baton Rouge and Lafayette with I-10, I-12, US 190, US 61 and US 90 among the roads still with significant flooding.

The rising floodwaters continue to wreak havoc in the southern portion of the state, including on a number of Louisiana Baptist churches.

First Baptist Denham Springs had at least four feet of water Saturday morning with the possibility of more by days end.

Despite their own church being flooded, Pastor Leo Miller and Discipleship and Outreach Minister Craig St. Amant turned their thoughts and prayers to the many displaced by the flooding and asked people to remember all those who have been affected by the flooding.

“Pray first for safety as people are searching for higher ground,” he said. “Pray for God to use this crisis for His glory. Churches are already opening doors for shelter. Pray for God to grant mercy and favor as people move into rebuilding process.”

“We are concerned with the number of people who have been flooded,” said St. Amant. “Please pray for their strength to endure through this horrible event.”

The worship center at Blood River Baptist Church in Albany, has taken in two feet of water, said minister of music and youth Cody Harty. The education building is knee deep in water.

“The Albany area is devastated,” he said. “The floodwaters are getting higher by the minute, and people are scrambling to higher ground. There is a lot of property damage.”

“We also have placed two shower units at these two shelters,” said McMillan.

Acadia Baptist Association Director of Missions Alan Knuckles reported Trinity Baptist Church in Eunice is completely flooded despite the sanctuary being raised two to three feet off the ground.

McMillan said Trinity wasn’t the only Baptist church affected as at least eight others have received flood damage.

Highland Baptist Church, New Iberia has water in its fellowship building while First Broussard’s worship center was flooded. First Baker and First Greensburg both sustained significant water damage. Mt. Nebo in Roseland, who had so much damage five months ago, had two feet of water in all buildings and the parsonage.

The fellowship hall at Hillsdale Baptist Church, the Hope Center in Roseland had water get into their buildings while Bethel Baptist, Franklinton has water in its basement. Galilee Baptist, Zachary has also sustained flooding damage.

“This does not include the private residences of our pastors and ministers,” said Wascom. “The Amite River was already in major flood stage at 41.5 feet Saturday and was expected to rise to a record-breaking 46 feet, two feet higher than was expected on Friday and almost five feet higher than the 1983 level.”

Lonnie Tucker of Still Water Baptist Church was one of those pastors who had water get into his Hammond home. Fellow Pastor Les Fogleman of Wadesboro Baptist in Ponchatoula, was there to help and ended up cooking a large pot of Jambalaya for the Tuckers and those in the subdivision.

“Thanks to our heavenly father, my earthly father, and a neighbor with a dune bugger, that rescued us from our flooded subdivision,” Tucker wrote on his Facebook page.

“We’ve been able to start cleaning out our house,” said Tucker. “Thanks for all of the help and concern extended to us.” 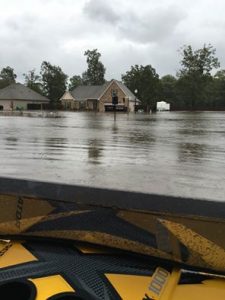 Ten inches of water came into the home of Lonnie Tucker. He is pastor of Stillwater Baptist Church in Hammond.

In Tangipahoa Parish, a parish that stretches primarily north and south lost all its major north-south arterial roads to flooding.

“Volunteers who can get over there, please go!” said Wascom. “I-12 West at I-55 is closed. Hwy 190 West is closed at Baptist by New Beulah. Hwy. 40 across Tangipahoa and Livingston down to below I-12 is flooding. Interstate traffic is being re-routed. It has sent me back to my house and kept me from getting to the Clegg Missions Center.”

Interstate 55, which was closed Friday, remains closed and U.S. 51 was shut down north of Tickfaw on Saturday due to high water.

East-west arteries were also being inundated. Westbound lanes of I-12 have been closed just west of Pumpkin Center and parts of U.S. 190 are closed, especially in the Robert area where La. 445 also is impassable.

“We are water-bound and without power, but thankfully, still dry in our house,” said Jeff Ginn, pastor of Istrouma Baptist Church in Baton Rouge. “It is heart breaking. We know of several families whose homes have taken on floodwaters. Our prayers and pledge of support go to each one.”

Denham Springs, a suburb of Baton Rouge, had an entire shopping center underwater. And in many places, the water was still rising, with days expected before rivers finally crest.

“This is an ongoing event. We’re still in response mode,” Edwards said, urging residents to heed warnings to evacuate and be prepared for a disaster that could last for several days.

Likewise, much of the metro New Orleans area, including the North Shore has endured flash flooding, school closures, stranded motorists and heavy flooding.

Rainfall battered the Acadiana area, flooding neighborhoods, closing schools and businesses and stranding motorists. And the National Weather Service in Lake Charles said more is coming. The system is expected to turn to the north late Sunday and portions of central and northern Louisiana could see heavy rain into next week.

“Everyone will see rain,” said one forecaster for the National Weather Service in Lake Charles. “The potential exists for flash flooding everywhere.”

Portions of south Lafayette, including Youngsville, where almost all public roads were closed Friday morning, sustained heavy flooding, driving residents from their homes.

First Broussard Pastor Weldon Moak said, “A few inches of water came inside the sanctuary Friday but it is drying out. I am hoping we can save the carpet.

“We are meeting Monday at church as we begin to send out teams to help clean up,” said Moak. “Pray for safety in cleanup and good weather.”

Because of the flooding, Pastor Steve Horn announced cancellation of Sunday services.

“After multiple conversations with staff, leadership, and those inside local governments, we have made the most difficult decision to cancel all services and classes at First Baptist Church, Lafayette,” he wrote on his blog page.

“As the weather improves tomorrow, we do urge our members to help their immediate neighbors in need,” Horn wrote. “As we get ourselves more organized in assessing needs, we will be providing additional leadership to volunteer relief opportunities in the days to come.”

Like First Lafayette, The Bayou also cancelled services after assessing the conditions.

“For the safety of our church members, volunteers and staff, the leadership team believes it is best to stay at home,” said Mike Walker, Pastor of The Bayou in Lafayette. “This not only provides safety but gives us ample opportunities to transform lives in Acadiana by serving and loving on our neighbors.

“As the water recedes, we will begin to reach throughout Acadiana as the hands of Jesus to serve our community’s needs,” Walker continued. “We know many of our members have suffered water damage this weekend. We are praying for you. We will do what we can to assist you when possible. Please let us know if you have a need by filling out the aid form posted earlier today.

“Your generosity with the Big Give has positioned us to reach into Acadiana to meet needs immediately. We have already been able to utilize these funds. The Bayou’s generosity is creating positive ripples across our community. God bless you as we strive to transform lives in Acadiana during this natural disaster,” said Walker.

“Pray for the folks whose houses were damaged,” said Carlton.

“Chris Fuselier, pastor of First Baptist, Youngsville, has 5 inches of water in his home,” Carlton continued. “Our executive assistant, Elizabeth Langley, and her husband, Pastor Larry Langley of The Garden also had several inches of water in their home and both have had to be evacuated.”

By Lane Corley MADISONVILLE, La. - Three years ago, our family was going through one of those down seasons in the ups and downs of life. My mental focus and physical health was declining. I was discouraged and struggling mentally and emotionally. I knew I needed to change a few habits. As part of a recovery … END_OF_DOCUMENT_TOKEN_TO_BE_REPLACED