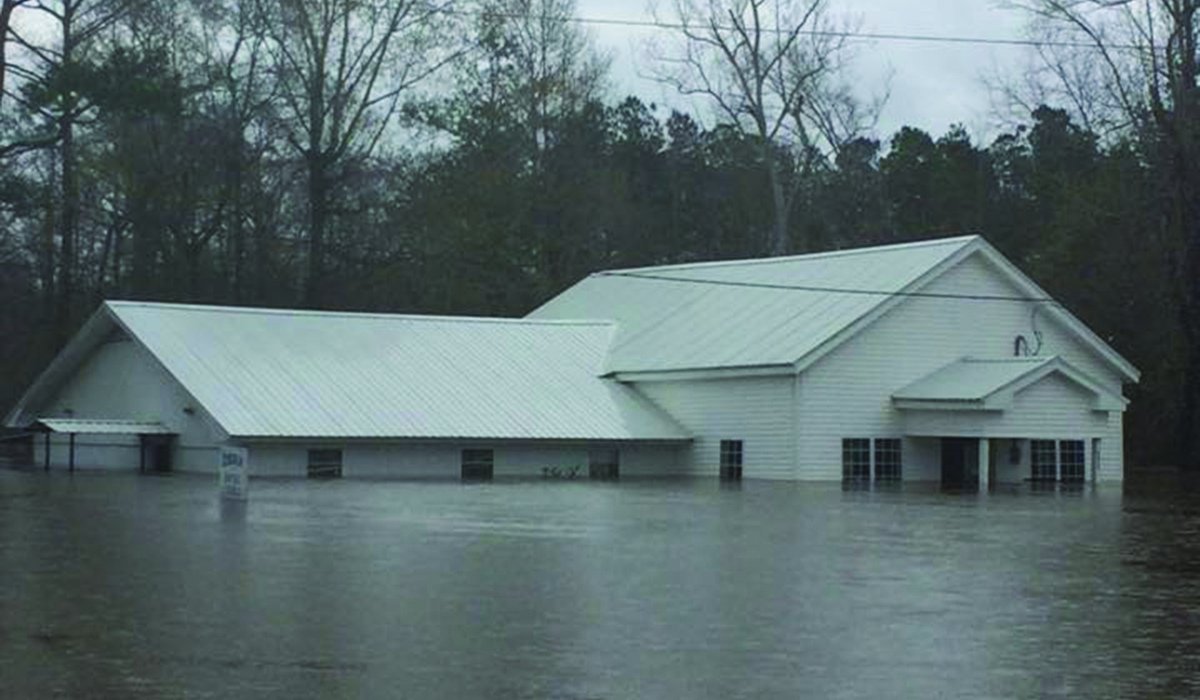 After a week of rain, the sunshine was a welcome sight for many in Louisiana Sunday.

The same could not be said for the rapidly rising floodwaters that has overtaken nearly 5,000 homes, businesses and churches throughout the state.

According to initial figures released Sunday (March 13) by the Governor’s Office of Homeland Security and Emergency Preparedness, 4,958 homes have been damaged due to historic river flooding caused by more than two feet of rain.

But during the reprieve many people affected by the flooding went to church to pray for the victims, seek God’s Divine intervention or to just give thanks. Such was the case as the community of Sterlington, unified by the historic flooding, attended services at First Baptist Church Sterlington.

The congregations of First West-Fairbanks Campus, First Sterlington, St. Andrew’s United Methodist Church and Foundry attended services at First Sterlington praying for unity in the middle of the present disaster.

Other Southern Baptist churches raised money to assist Louisiana Disaster Relief teams in recovery efforts while still others collected items to help people who had lost everything in the flooding.

Some congregations, like the one at Zenoria Baptist Church near Trout, was not so fortunate as the church is inundated by floodwaters from a rapidly rising Little River.

At First Baptist Church Castor, a Louisiana DR unit with washing machines and dryers ready for use for flood victims and those without electricity has set up at the church.

Another Louisiana Baptist DR team will be at North Monroe Baptist Church the first part of next week. They will be working to pull out carpet, sheetrock, flooring, etc.

People can contact the church at 318.343.4730 or email relief@northmonroe.com for more info.

Assessors and chaplains spent Sunday working and crews from the Louisiana Disaster Relief will be on the ground hopefully working Tuesday or Wednesday doing mud-out.

According to Director of Missions Stan Statham, Mt. Nebo Baptist Church suffered major damage from the flooding and they do not have flood insurance.

“We do not have any exact number of how many homes that have been flooded but we are expecting it to be over 100 homes,” Statham said. “Our response will be significant and most likely last for several weeks.” 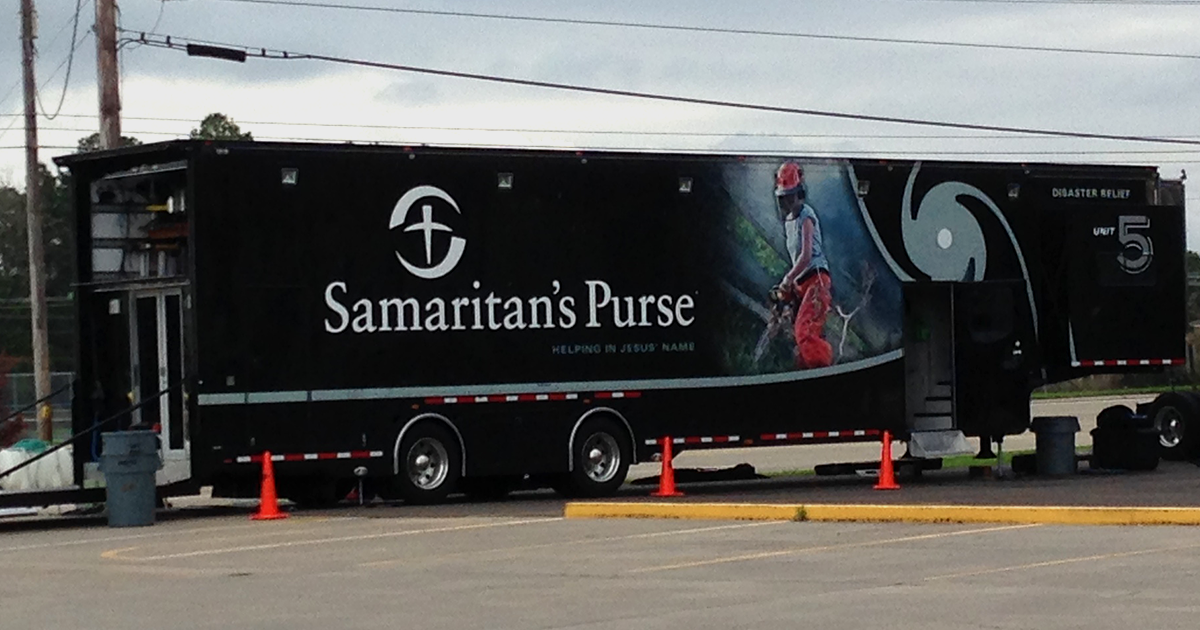 Franklin Graham, president of Samaritan’s Purse posted this on his Facebook page, “We hope we are able to help the people in Louisiana salvage as many of their belongings as possible and start the process of getting them back into their homes.

“We have deployed Samaritan’s Purse disaster relief teams in West Monroe and Bossier City,” Graham said, “Our teams have brought in equipment and as soon as the water recedes, they roll up their sleeves to help flooded families get the mud out of their homes, sort through water-damaged personal belongings, and pull out damaged sheetrock, flooring, and insulation.

“Please join me in praying especially for all those who have lost so much to the flood waters and for our teams who will be there working to help over the next few weeks,” he said.

The worst is far from over and officials warned the count of damaged homes is likely to grow as damage is assessed in southwest and southeast Louisiana, especially in western St. Tammany and Tangipahoa and Vernon and Calcasieu Parishes.

Much of the GOHSEP assessment has taken place in north/central Louisiana, which was the hardest hit part of the state because of the amount of rain that fell.

“Damage assessment is happening in phases,” said Steele. “The number of homes damaged is likely to continue to climb as the state sees the full extent of flooding as rivers overflow.”

Many people were caught off guard by how fast it flooded.

The Louisiana State Police, agents of the Louisiana Department of Wildlife and Fisheries, the Louisiana Army National Guard, various sheriff offices and neighbors have worked tirelessly to rescue people and their animals from the rapidly rising floodwaters.

As of Sunday, LDWF enforcement agents have currently rescued a total of 579 people, 52 dogs and two cats.

Since March 9, some 1,340 Louisiana Army National Guardsmen have responded to flood operations in 25 parishes according to a LANG spokesman. The Guardsmen have performed evacuations, search and rescue by vehicle, boat and helicopter, distribution and supply of water, security and shelter support, and distribution of sandbags.

Over the course of these operations, the LANG has utilized more than 160 high-water vehicles, 44 boats, and 3 helicopters.

The LANG has rescued more than 3,295 citizens, and 316 pets. They have also distributed more than 12,000 bottles of water, issued more than 582,000 sand bags with 8 sandbag-filling machines.

Guardsmen were heavily involved in rescue operations in Tangipahoa Parish Friday and Saturday as they assisted local and state officials with the evacuation of more than 2,500 people were rescued due to rapidly rising floodwaters.

The record-setting flood levels along the Sabine River in southwest Louisiana are expected to continue over the next few days, according to officials with the National Weather Service in Lake Charles. Residents in communities along the river were encouraged to evacuate Saturday as water levels rose significantly. 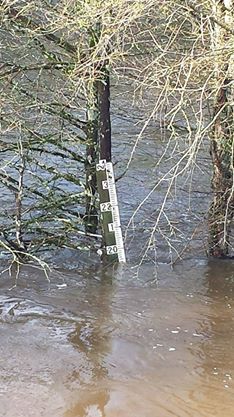 The gauge at the Sabine River shows how high the river has risen since Thursday. It is expected to rise even more as more water is released from Toledo Bend Reservoir.

“Our first goal is to help our local partners through the response phase of this event,” said GOHSEP Director James Waskom. “We will begin to transition into the recovery phase as conditions improve.

“We have been working with FEMA for the past several days in an effort to streamline the disaster assessment process that will ultimately determine what level of Federal support will be available for individuals, parishes and state agencies dealing with flood,” Waskom continued. “The assessment work may begin in phases because the storms impact took several days to develop in some areas, but rest assured, that work will continue in all areas once it is safe for the joint FEMA/GOHSEP assessment teams to access other regions.

“We urge everyone to continue to use caution in areas where floodwaters remain,” Waskom said. “This crisis is not over.”

Temporary housing, money for home repairs, low-cost loans to cover uninsured property losses and other forms of aid will be available.

By David Jeremiah EL CAJON, Calif. (BP) - Something strange happens to the psyche of a nation in difficult times. The downtrodden begin to resent government and wealthy corporations and individuals, seeing them as out of touch with, if not the cause of, their plight. Desperation can lead to a reversal of … END_OF_DOCUMENT_TOKEN_TO_BE_REPLACED