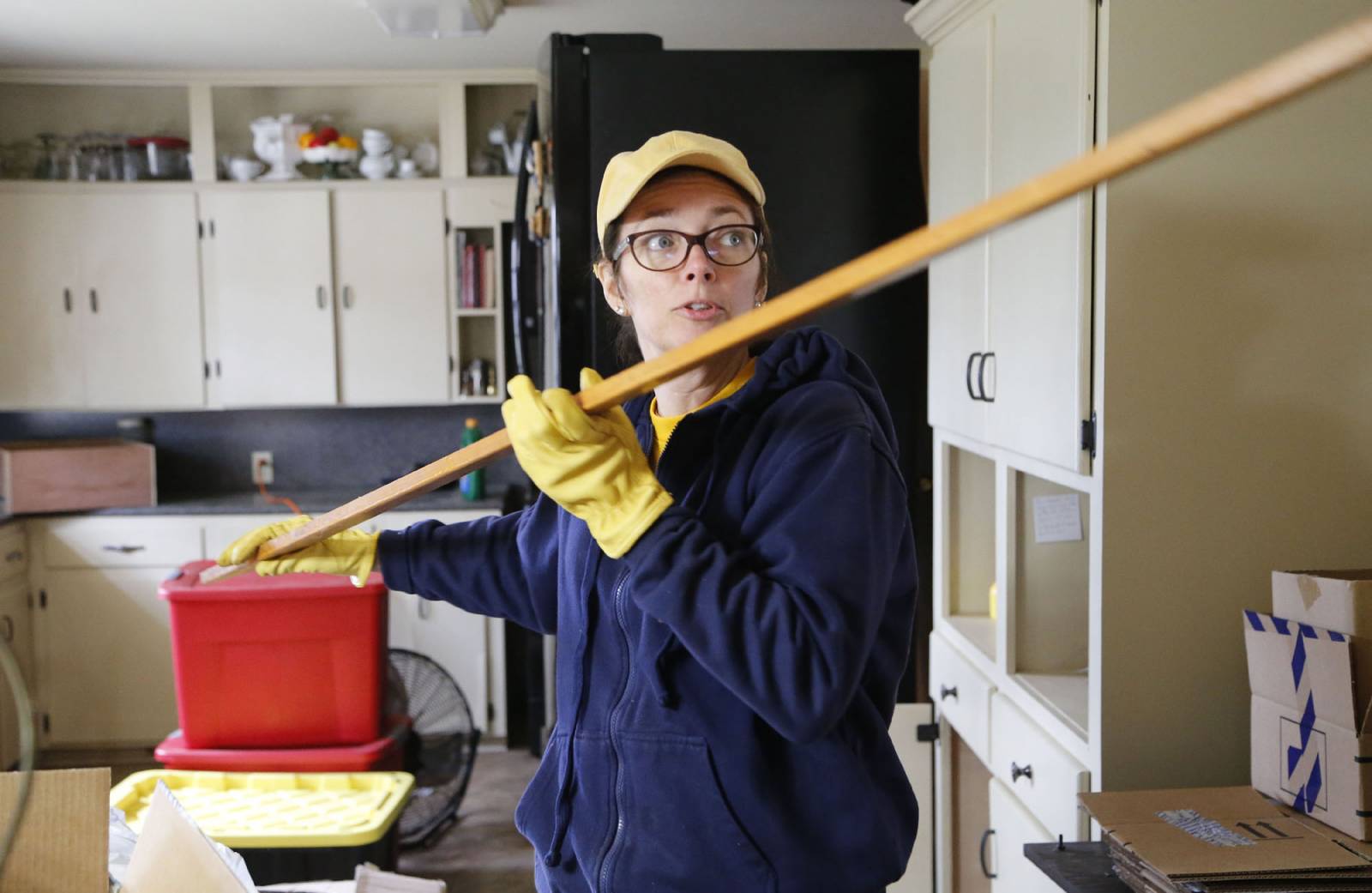 It has been a long two weeks for Louisiana and its residents. Perhaps some of the toughest encountered in more than 25 years.

First there was the rain.

More than two feet fell in three days in the north central and northeast corner of Louisiana followed by historic flash flooding.

After the rain, came the flooding.

Rapidly rising floodwaters made roadways impassable, trapping people who had to be rescued, flooded numerous homes, businesses and vehicles and washed away roads and highways.

With the rain gone temporarily — severe storms are forecasted for Wednesday and Thursday — and with some rivers having crested and actually beginning to fall slowly, people’s attention have turned to cleanup and recovery.

For the people in the affected areas, they are well aware of what has taken place. But outside the state there has been little or no mention of the severity of the disaster.

“There really has been little mentioned about what is going on here,” said Ron Earley, a member of Southern Baptist Convention of Virginia Disaster Relief and a veteran of disaster relief work. “People don’t know or don’t realize the amount of destruction that has taken place here.

“I was here for Katrina and there was such an outpouring of help and support from volunteers across the country. Why? Because there was so much national media covering the story,” Earley said. “This time the response is slower materializing because the news has not gone national.”

Early, who is stationed this week at East Leesville Baptist Church, said the need for volunteers is important in the recovery process. “I was told 80 to 85 percent of Louisiana’s trained disaster relief personnel have been affected in some way by this flooding,” he said. “You need trained to do mud-out and spraying because of the dangers involved.”

But churches, communities and neighbors have not waited for help to arrive. From the start, they have banded together to minister, support and help their fellow neighbors.

“A lot of times in disaster, neighbors won’t pull together,” said Earley, who has been doing disaster relief work since 2005. “They will wait for help to come in. It hasn’t been the case here. Neighbors are helping neighbors. I am amazed how people are pulling together here.” 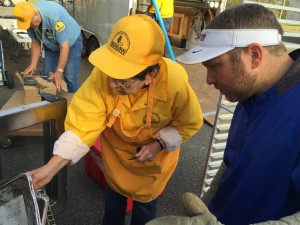 Southern Baptist Disaster Relief volunteers unload food from a warming station at Horseshoe Drive Baptist Church in Alexandria on March 22, 2016. The teams from Arkansas and First Pineville prepared 850 meals that were picked up and distributed to those affected by flooding. Photo by Brian Blackwell

A little more than 50 miles to the east of East Leesville Baptist Church is another staging site for Southern Baptist Disaster Relief work. A team from Arkansas along with a couple of disaster relief team members from First Baptist Church in Pineville spent Tuesday morning preparing 850 meals for those affected by the flooding in central Louisiana. Stationed at Horseshoe Drive Baptist Church in Alexandria, the team is working through March 28 there.

Ed Whitson, a member of the Arkansas Baptist Disaster Relief team from Arkadelphia, Ark., told the Baptist Message this is their passion and mission to those hurting after the flooding.

“As Baptists, this is part of our mission,” Whitson said, “to serve in any place in need and get the word out about our Savior.”

“I’ve been trained before but this is my first disaster to respond to,” said Stansell, who responded after learning of the need during a deacon’s meeting on Monday evening at First Pineville. “It’s neat to see how God is using all of the different gifts for one purpose.”

Not long after the rain started on March 8, members of North Monroe Baptist Church sprang into action, going to homes endangered by rising floodwaters and sandbagging.

Between March 8-11 Monroe received over 20.66 inches of rainfall which lead to more than 2,000 homes and businesses being flooded.

Soon afterwards, the church began receiving phones call from those in the community needing help assessing damage, praying with affected homeowners, serving on response teams and feeding upwards to a 1,000 meals a day.

The church has assisted more than 300 homes and the list is growing.

Jody Pickett, North Monroe Baptist’s media director, was not surprised by the congregation’s response to the disaster.

“I knew the heart of the church and their willingness to serve their neighbors in need,” he said.

“What’s great about the church’s response is it began with the people who were members of one of our Life Groups. They started in their own neighborhood by helping others,” Pickett said, “and it has expanded. We saw our church people respond quickly as well as the Church in general to the needs of the community.”

Perhaps the greatest ministry opportunity that has occurred since this disaster began has been North Monroe being able to minister to some people who they might not have been able to reach prior to flooding because of the church’s response.

“We are getting into homes we might never go into,” Pickett said. “They have their reasons for not going into church, such as a bad experience. But now we have the opportunity to get back into the homes. It’s not the greatest of circumstances but we’re invited in now.”

FINALLY ABLE TO STAND DOWN

After 12 days in the front lines of disaster relief, First Baptist Church Sterlington has given way to units from Oklahoma Baptist Relief and can return to just ministry.

“We are a small church but we have given it our all,” said Pastor Ben Hackler. “This church’s response just makes me proud. As I was telling my congregation Sunday we can’t do as much as a bigger church, so you do for those you can help.

“We have done a little everything,” said Hackler, “from moving furniture, to sandbagging, to feeding all the while meeting the ministry needs of the people we have come in contact.” 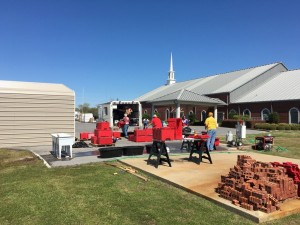 First Baptist Church Sterlington has given way to units from Oklahoma Baptist Relief and can return to just ministry, after serving 12 days for relief operations. Photo by Ben Hackler

Hackler, who learned first-hand about disaster relief while dealing with Katrina victims at Longview Baptist Church in Deville, said Sterlington has been a “shining light in this time of darkness with their participation.”

“We have been able to meet the needs of about 31 families, 120 individuals,” he continued. “We did not have anyone join the church or get baptized but I believe we planted some seeds.”

He said the best story to come out of the last two weeks happened during the first week, “Project 41 [a local group that fights sex trafficking and exploitation] stopped by to take some stuff and food to the hotel where they had victims staying.

“The recipients of the items asked where we were because they wanted to go to a church that would do something like we did,” said Hackler.

Perhaps the best story of all, according to Hackler, was the crossing of interdenominational lines between the four churches in Sterlington, which included First Baptist Church of West Monroe Fairbanks campus. “We were able to join together, lean on each other, and serve this community. I believe that was a God moment.”

By Joe McKeever Freely you have received; freely give. (Matthew 10:8) JACKSON, Miss. (BP) -- Dr. Watson was complimenting Sherlock Holmes on a brilliant observation no one else had noticed. "Of course," Holmes remarked. "It's what I do." Forgiveness and grace -- that's what we believers do. Here is … END_OF_DOCUMENT_TOKEN_TO_BE_REPLACED