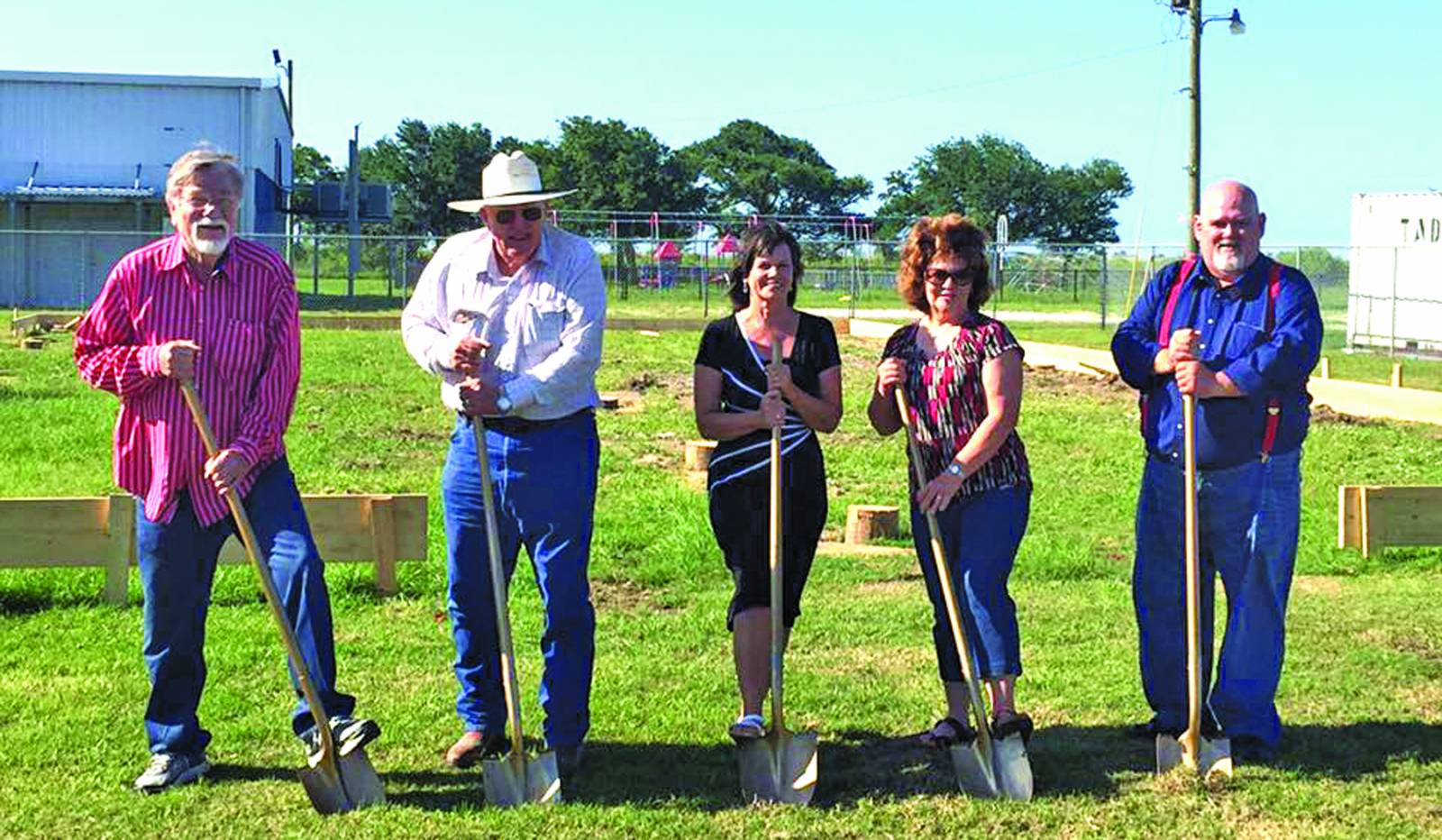 The congregation of Johnson Bayou Baptist Church breaks ground on its new building during a special ceremony on June 22. Scheduled for completion in September, the new building will be a metal structure with wood interior. To protect itself from possible rising water, the 3,200-sq.-ft. structure will sit on beams 100 feet high.

JOHNSON BAYOU – The past of Johnson Bayou Baptist Church is filled with far too many memories of damage and destruction caused by two hurricanes in the past 11 years.

Yet with each setback its members vowed not to give up, and promised not to dismiss the dream of finally one day rebuilding at its original location off Highway 82.

Now that persistence paid off with an official groundbreaking ceremony and the laying of the first boards of a new church building on June 22.

“After nearly eight years of not having a building, this is a dream come true,” said Pastor Jack Gandy.

Scheduled for completion sometime in September, the new building will be a metal structure with wood interior. Built by Brystar Construction of Beaumont, Texas, the cost is approximately $575,000.

To protect itself from possible rising water in the future, the 3,200-sq.-ft. structure will sit on beams 10 feet high. Inside the building will be an auditorium with seating for 100, classrooms, a kitchen with a small fellowship area, restrooms and an elevator.

The original structure was damaged when Hurricane Rita made landfall Sept. 24, 2005, as 4-5 feet of floodwaters came inside the building and the high winds ripped apart the roof. Months passed before electricity was restored.

Throughout the next five months, Pastor, Les Fogleman lived in a donated camper on the church grounds and coordinated all of the renovations. Groups from Louisiana and outside the state began helping rebuild the church.

By Thanksgiving the first group of his members returned to the church and more slowly trickled into Johnson Bayou throughout the next few months.

Renovations to the worship center and some classrooms were complete by April 2006. All of the volunteers had now left, leaving church members to hold services once again inside the sanctuary.

But two years later another tragedy struck the church and community.

Hurricane Ike made landfall in Galveston, Texas, Sept. 13, 2008, causing considerable damage to the community including the destruction of most of the town’s buildings. Among those was Johnson Bayou Baptist Church.

Today, the town is showing signs of normalcy once again.

Students had spent years going to school in temporary facilities after Rita destroyed the original structure.

With the recent uptick in construction, Gandy is optimistic about a community that at one time seemed to have little hope of returning to its former self.

“To me, the construction of these facilities is solid evidence that Johnson Bayou is healing from the wounds that Rita and Ike inflicted,” Gandy said. “We are looking at a new housing subdivision which will contain 69 housing units. And, with these facilities, we now have the means to provide full-time ministry to these people.”

By Joe McKeever Freely you have received; freely give. (Matthew 10:8) JACKSON, Miss. (BP) -- Dr. Watson was complimenting Sherlock Holmes on a brilliant observation no one else had noticed. "Of course," Holmes remarked. "It's what I do." Forgiveness and grace -- that's what we believers do. Here is … END_OF_DOCUMENT_TOKEN_TO_BE_REPLACED