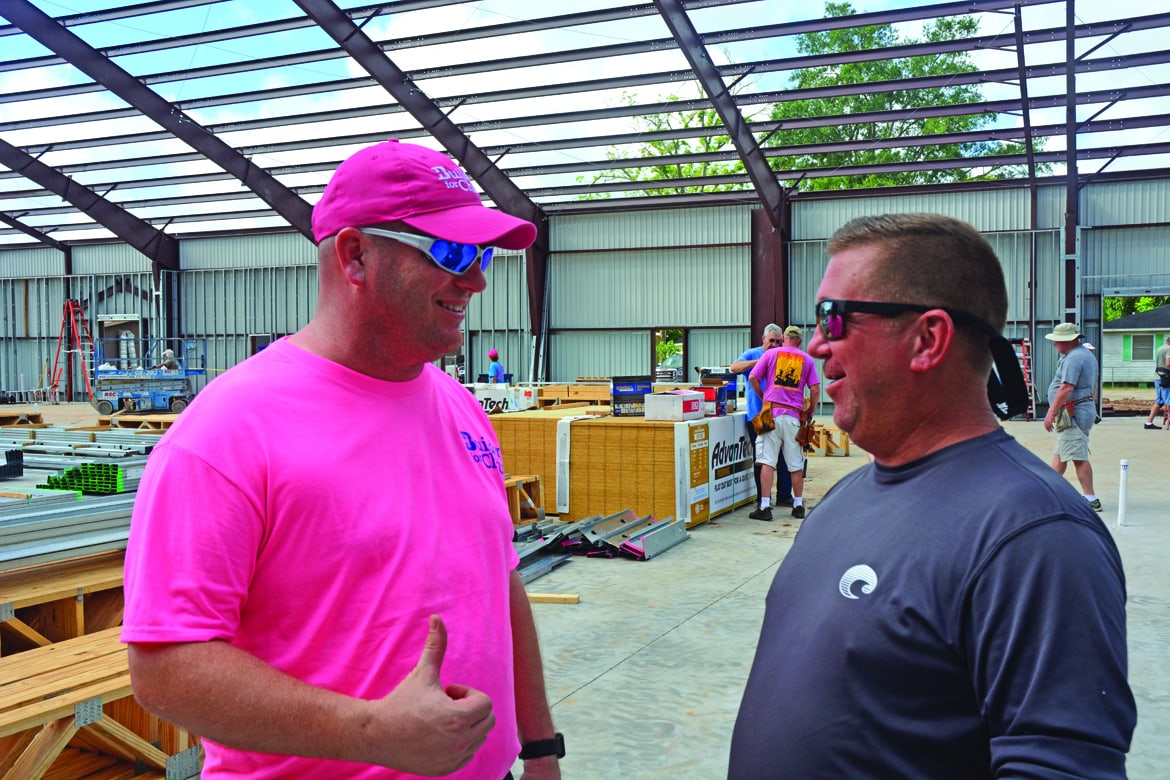 PORT BARRE (LBM) – Nearly 150 volunteers from Texas have spent a portion of their summer helping the First Baptist Church in Port Barre to expand its Gospel reach into the community through the construction of a worship center that will accommodate a growing membership.

Under the direction of Mike Shumock, who serves as missions builder strategist for Louisiana Baptists and is the coordinator for Baptist Builders, a construction missions group, three teams from Texas are working with Louisiana Baptists to frame, install sheetrock, wire and plumbing inside the 20,000-square-foot facility. Once completed, the structure will house a worship center (with future seating for up to 600), youth room, reception area, nursery and coffee bar as well as restrooms and an education space with nine classrooms.

Groundbreaking was held in early January and the new facility is expected to open by Christmas.

“It’s been an amazing experience for us,” Pastor Benji Richard told the Baptist Message. “We have heard about groups coming to build other churches, but there is nothing like a first-hand experience. They don’t make it about just building a building but make it about Kingdom work. They have inspired us to do the same one day and go out in the state to be a blessing to these other churches that are building.”

When Richard came to First Baptist Port Barre in 2009, Sunday morning worship attendance averaged eight people. He instilled in his congregation a sense of purpose and passion for reaching the community, and the result has been growth through evangelism. According to church records, average Sunday morning attendance grew to 200 this year, and they have baptized 185 new converts since Richard became pastor.

Richard said his congregation has fully embraced a Gospel mission.

Church members share the Gospel inside jails and juvenile centers, during Vacation Bible School each summer and as part of Celebration Recovery meetings for those who wish to overcome addictions.

“It’s a God thing,” Richard said. “It’s not anything we have or haven’t done. It’s amazing to see God work. He said, ‘If I be lifted up I draw men unto myself.’ He gets all the credit here. It’s been an encouragement to our people and me to see so many of them come to faith in Christ.

He said his congregation is faithful to disciple new believers and to plug them into what God is doing through the church in the community.

“We are very intentional about God using them and backing out of the way,” he explained. “Discipleship allows you to do more through others than you can do yourself.”

Shumock said the Port Barre project is the fourth one undertaken by Baptist Builder volunteers this year:

— In May, Mississippi Baptists helped rebuild a 5,000-square-foot education building for Suburban Baptist Church in New Orleans, which lost several of its buildings after an EF-3 tornado touched down in the area Feb. 7, 2017.

— In early June, a team from Franklin Creek Baptist Association in Alabama with assistance from a Wisconsin Baptist volunteer helped the Korean Baptist Church in Leesville build a 3,000-square-foot multipurpose facility.

Other projects planned for 2019 include construction of a 1,200-square-foot addition to the worship center for Greys Creek Baptist Church in Denham Springs, which was heavily damaged in the flood of 2016, and building a new 8,000-square-foot multi-purpose facility at First Baptist Church in Napoleonville, Shumock said. The start dates of both projects are contingent on securing an adequate number of volunteers.

“The excitement of building in the community and the church generates people to want to come, to be able to hear, and to be able to respond to the Gospel,” Shumock said. “They know that church is doing something. Anytime you build and have a new mission, it will create curiosity and draw people to Christ.

And that’s what we are trying to do with the Baptist Builders.”

To learn more about volunteering with the Baptist Builders call 225.975.0848 or visit facebook.com/groups/LAMissionBuilders/.

By Joe McKeever Freely you have received; freely give. (Matthew 10:8) JACKSON, Miss. (BP) -- Dr. Watson was complimenting Sherlock Holmes on a brilliant observation no one else had noticed. "Of course," Holmes remarked. "It's what I do." Forgiveness and grace -- that's what we believers do. Here is … END_OF_DOCUMENT_TOKEN_TO_BE_REPLACED