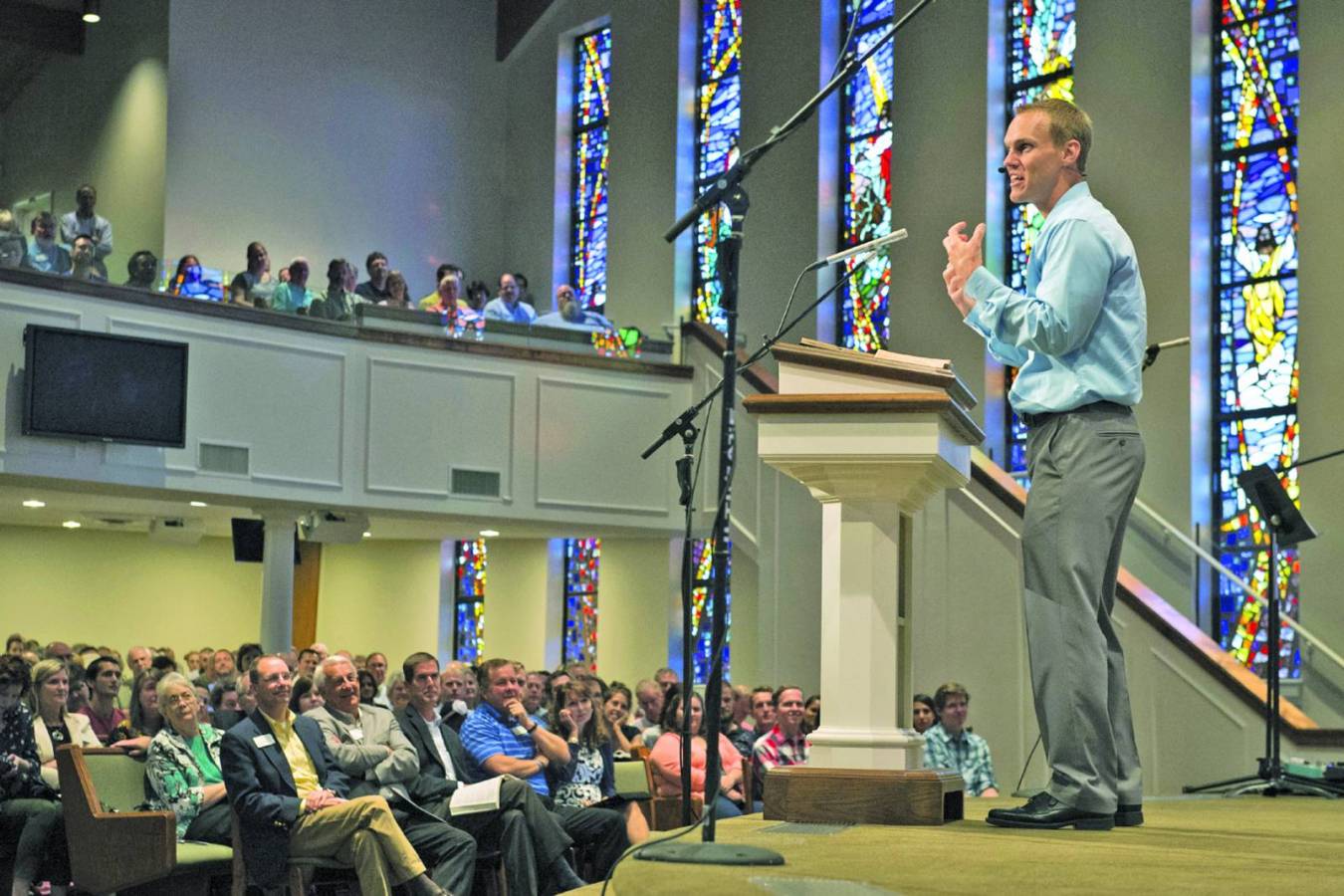 IMB President David Platt addressed the packed crowd at Spotswood Baptist Church of Fredericksburg, Va., Aug. 26 in which 42 missionaries were appointed in a service.

ALEXANDRIA – David Platt, president of the Southern Baptist Convention’s International Mission Board, shared that the overseas missions group had overspent its budget by $210 million since 2010, including $39 million in 2014, alone, dropping operating reserves to 4 months of funding, below the minimum 6 months amount advised by the SBC Executive Committee.

Consequently, he said, the IMB plans to reduce its workforce – field missionaries and staff – by 600-800 people.

During a conference call with reporters August 27 Platt laid out the situation in terms of a crisis of IMB’s own making.

“The challenge we’re addressing is that despite increased giving to the IMB over the last four years, for example, we have consistently spent more money than has been given to us each year,” Platt explained.

“What we realized,” he said, “is as we got into the budgeting process this year – even since the SBC—that not only did we have that $21 million shortfall in 2014, but we were also using global property sales to cover some of our expenses in 2014 that  was to the tune of $18 million.

“So when you add those two numbers together you realize in total, in 2014, we were spending $39 million more than people were giving to us—and that was just one year,” he summarized.

Platt offered that IMB had been doing this “going back to 2010,” and the organization had covered the overspending by dipping into reserves as well as by selling global properties, adding “our organization has spent, combined, $210 million more than people have given to us.”

IMB spokesperson Wendy Norvelle subsequently explained to The Baptist Message that, in the past, IMB’s budgeting process included use of a formula that employed a four-year rolling average of revenues (monies received) to set its budget.

Then in 2014 and 2015, the SBC entity changed its process to include the entire $175 million goal in putting together just its operating budget.

She also said IMB trustees have approved use of reserves in the past to cover one-time contingencies such as technology upgrades, or special meetings, and similar emergent needs, but not to pay for normal operating expenses.

Norvelle later told The Baptist Message the overspending was not a surprise to IMB leaders but had been a deliberate process to draw down the funding that was available in contingency reserves.

Consequently, even selling off global properties worth almost $197 million, the IMB had to draw down its operating reserves to less than $213 million at the end of 2014 – representing a balance of only 4 months of budgeted expenses because some of that amount is restricted (e.g. endowments and global missionary capital fund).

IMB leaders hope to reestablish sound financial footing by offering voluntary early retirement with generous incentives that have not yet been decided, according to Platt.

Details will be announced to IMB personnel Sept. 10, an IMB press handout stated.

This first phase of regaining stability involves accelerating attrition that otherwise would have taken place during the course of the next several years.

The IMB will continue to appoint 300 new missionaries this year and next year to account for ongoing personnel changes due to retirements, deaths and other anticipated causes. So the 600-800 reduction in people will be in addition to these expected turnovers.

The aim is to make it attractive for someone who is nearing retirement to make the transition several years early.

If the first offer does not produce enough contraction in IMB’s rolls by December 2015, the entity’s next move will be to provide its people another opportunity “to voluntarily transition into work outside of the IMB,” presumably before taking other actions to reduce personnel.

However, according to the IMB notes, because of its “tight financial condition” – in six months, on its current course, the IMB will be forced to use another month of operating reserves – it will be more difficult to be as generous in future offers to encourage voluntary departures. Thus “VRI will be the best option that can be offered.”

Reducing its workforce is the first phase of Platt’s plan to create a roadmap for the future. The second phase, described as “concluding the reset,” has been in motion already and entails “consolidating support services, recalibrating mobilization, assessing global engagement and re-envisioning training.”

Platt stressed two key points in making his presentation via telephone, and both emphases expressed his concern about the impact of the IMB’s actions on people.

First, he said the budgeting change was not a reflection on past IMB leaders.

“So, I want to be clear in describing all of this, and, I want to ask you all to be clear in communicating all this that my aim is in no way to question decisions by previous leadership across the IMB during these years,” Platt told the press during the conference call. “As I mentioned, previous leaders put in place a plan to slowly reduce our number of missionaries through normal attrition, through reduced new missionary appointments, while using reserves and global property sales that we’ve had to keep as many missionaries as possible on the field.”

“What we’ve come to now is the realization that that plan is no longer viable in light of current realities,” Platt said. “So, IMB can’t continue to overspend as we have. We don’t have the reserves or global property sales to be able to do that.”

Secondly, he said the voluntary departures were difficult for him to announce, because of the family relationship that exists among IMB personnel.

“These are brothers and sisters who have spent and are spending their lives in various capacities to spread the Gospel among those who’ve never heard it,” he said. “And I see them. I want to support, serve them, every way I can – we can – for the spread of the Gospel through them.”

“Not only that I want to see multitudes more of people spreading the Gospel alongside them in the future,” he continued. “But, these numbers represent a reality that I can’t ignore personally and we can’t ignore organizationally.”

But, Platt said “for the sake of short term financial responsibility and long term organizational stability” the reduction in personnel combined with the implementation of a new budgeting discipline was essential.

Listen below for an audio recording of a recent teleconference with Platt, along with a FAQ and press release related to this issue:

By Stewart Holloway PINEVILLE, La. - Recently, a former church member messaged me for prayer. The situation is devastating, and Rebecca and I are covering it in prayer. To be asked to join this individual in prayer as a former pastor and friend was a humbling blessing. Other than a social media comment here or … END_OF_DOCUMENT_TOKEN_TO_BE_REPLACED