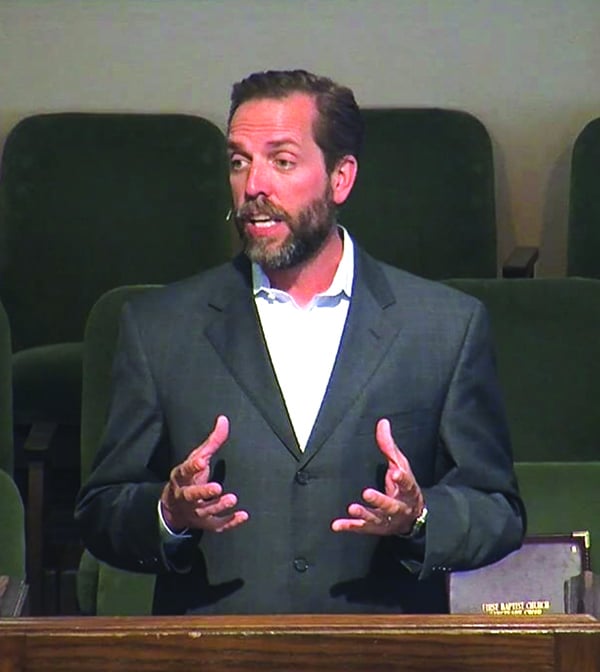 RAYVILLE (LBM) – I was recently in Alexandria for a meeting and began to think about evangelistic outreach.

At First Baptist Rayville we use various approaches to sharing the Gospel. But I began to take a hard look at my personal evangelism strategy and what more I could do to spread the Gospel and teach others to do the same.

I felt the Lord impressing upon me a specific plan that seemed easy enough: plain old-fashioned door-to-door “soul winning.”

My plan was to enlist one of the guys at my church who was my age and younger – perhaps who had never experienced door-to-door witnessing, or witnessing at all – to join me in this effort.

I was thinking that if I could get someone to go with me and he witnessed someone trust in the Lord that not only would the person be saved but the guy with me would get fired up about sharing the Gospel.

I prayed about the plan; the Lord confirmed it in my heart; and, I was moved to begin the next Wednesday night right after Bible study.

I figured I would call one of the regular attenders to go with me, but the first person I called said he wouldn’t be there; and, the second man said he had something going on.

In the end, I said to myself, “No problem, I will just catch whoever is hanging around after Bible study.”

As I drove home, I prayed and asked the Lord to show me exactly the home where I should start. Then I asked the Lord to save a soul: “You know Lord, if I’m asking men to go with me door to door, it sure would be a great encouragement if you would allow us to see a soul saved.” Almost instantly, He placed in my mind and on my heart where I needed to go, so I spent the rest of the ride praying for someone to be saved.

After Bible study that Wednesday I went over to the gym to find someone to go with me, and to my surprise, no one was around. So, I sat down for a few minutes until I heard the voice of one of our men outside the gym.

When I approached and asked if he wanted to make a visit with me he said his son was with him. But I assured him we would not be gone long and that his son and mine could shoot basketball in the gym until we got back.

As we were walking across the parking lot, Adam asked who we were going to see. After I said, “I don’t know,” he looked at me with a funny look and replied, “Oooookay.” I told him we were going to do door-to-door witnessing, which did not appear to comfort him.

We just kept walking, and as we approached the house I turned and looked at him and said, “This is gonna be fun, Adam.” But he didn’t look like he believed me.

I knocked on the door and a young man answered to whom I introduced Adam and myself. I explained I was the pastor of FBC Rayville and we chatted for a few moments about the church and his church background. Then I worked the conversation around to ask him if he knew the Lord and if he was confident in his salvation. He shared that he wasn’t, so I explained to him that the Bible tells us we can know we are saved and asked him if he would like to know how.

He invited us in and I asked if he had a Bible, and right there in his living room I pointed out the verses of the Romans Road, asking him to read them aloud – and I asked him if he knew what each meant.

For example, he read Romans 3:23, “For all have sinned and fallen short of the glory of God.” I asked, “What do you think that means?” and he looked at me and said, “Everybody has sinned.”

When we finished, I asked the young man if he would like to pray for salvation and assured him if he was willing to turn from his sin and turn to God through Christ, he would be saved.

There in the FIRST house we visited, the young man prayed for salvation.

I believe the answer to what ails the church is this simple: Christian men and women need to personally share the Gospel with others all around them.

If we will share the Gospel, God will save souls.

Eddie Wren is pastor of the First Baptist Church in Rayville, Louisiana, and president of the Louisiana Baptist Convention.

By Lane Corley Olive trees produce one of the most desired and sought after fruits around the world. The trees can live for thousands of years. The olive and the olive tree is spoke of in the Bible on numerous occasions. Including a few references to family life, like in Psalms 128:3 – “Your children will be … END_OF_DOCUMENT_TOKEN_TO_BE_REPLACED