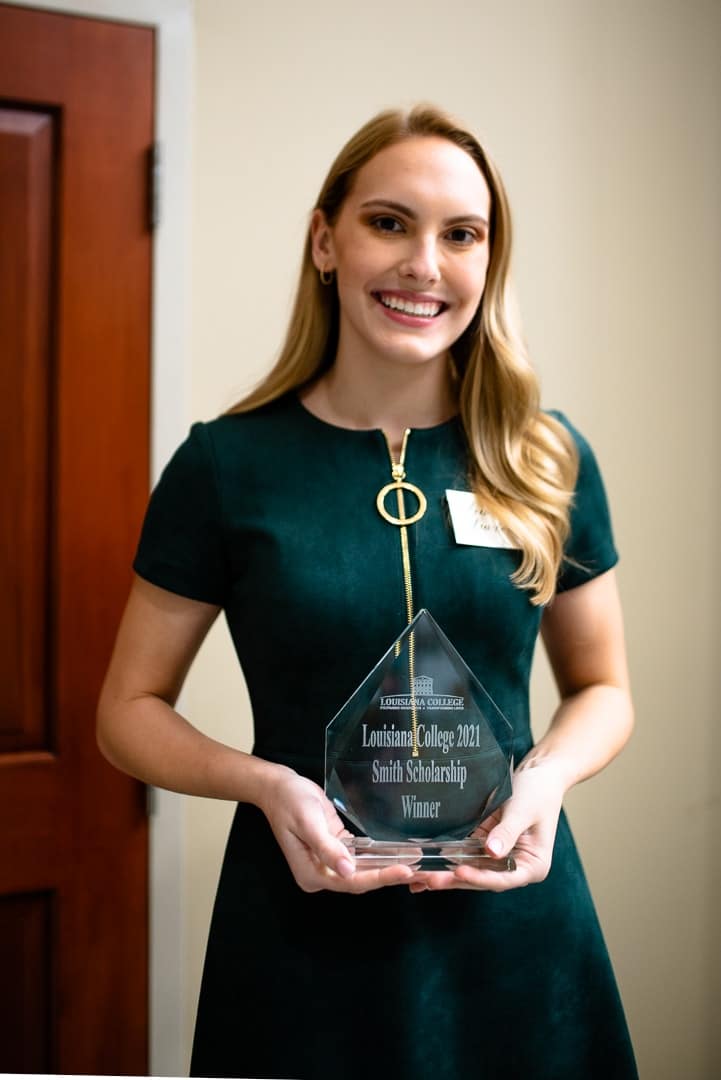 The Pineville High senior won over 14 other competitors a scholarship that covers tuition, books and room and board.

Lanford noted that she leaned on her faith when she was diagnosed with an autonomic nervous system disorder about a year-and-a-half ago.

“Throughout my high school career, I knew that LC was the place I wanted to go because I wanted to grow in that faith,” Lanford said in her acceptance speech. “And I wanted to learn more about my condition, which is why I am studying in pre-med and going to become a pediatric cardiology to help kids just like myself.”

Lanford, whose parents are graduates of Louisiana College, plans on studying pre-med as she pursues a calling as a pediatric cardiologist. She will attend LC with her twin brother, Ethan.

“We are very thankful for the students who honored us by entering the competition,” LC President Rick Brewer said. “We are especially honored that Leanna has heard and answered God’s calling and wants to begin preparing for her call at Louisiana College.”

The Smith Scholarship began in the 1970s after Tom and Beverly Dunham began an endowment donation to honor Beverly’s mother, Elizabeth Smith. The annual competition drew contestants from Louisiana and Mississippi. Competitors must have at least a 28 ACT score and are further evaluated based on their leadership qualities and Christian character. Qualified contestants who enroll next fall at LC will be awarded an annual academic scholarship and will join the C.S. Lewis Honors Scholars program.

“We are very excited to be enrolling our fifth cohort into the C. S. Lewis Honors Program- a program focused on interdisciplinary and experiential learning,” said Sarah Payne, Honors College coordinator. “We look forward to having Leanna Lanford and all the highly qualified Smith Scholarship competitors joining us on campus this coming fall.”

LCNews and the Baptist Message contributed to this report.

By Stewart Holloway PINEVILLE, La. - I’ve heard people say, “If that doesn’t light your fire, your wood is wet.” I would say that about yesterday. It’s been a while since I had a 15 1/2 hour Sunday and was so jazzed when I got home that it was hard to come down. But yesterday was that. First, we had baptisms … END_OF_DOCUMENT_TOKEN_TO_BE_REPLACED