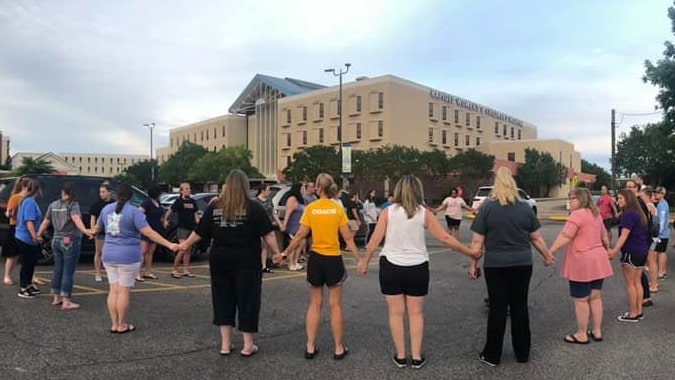 Educators from Tioga High School and Tioga Elementary School, where Mason Cooper attends, prayed Sunday on the parking lot at Rapides Regional Medical Center in Alexandria. Mason was the lone survivor in a private plane crash that took the lives of Ben and Blake Cooper. Facebook photo

According to City of Pineville officials, Ben was flying the plane when the accident occurred after take off from the Pineville Municipal Airport at 1:20 p.m. Blake’s son, Mason, was thrown from the wreckage, underwent survey and is expected to live, officials said.

The crash remains under investigation by the National Transportation Safety Board.

Ben was owner and administrator of Oceans Behavioral Hospital in Alexandria while Blake was executive director of the Central Louisiana Regional Port.

By Chuck Kelley Rhonda and I met on our first Sunday at Baylor University. We began dating during that freshman year, became an exclusive couple our sophomore year, publicly committed to a serious relationship in our junior year, became engaged in our senior year, and were married in June after graduation. We … END_OF_DOCUMENT_TOKEN_TO_BE_REPLACED