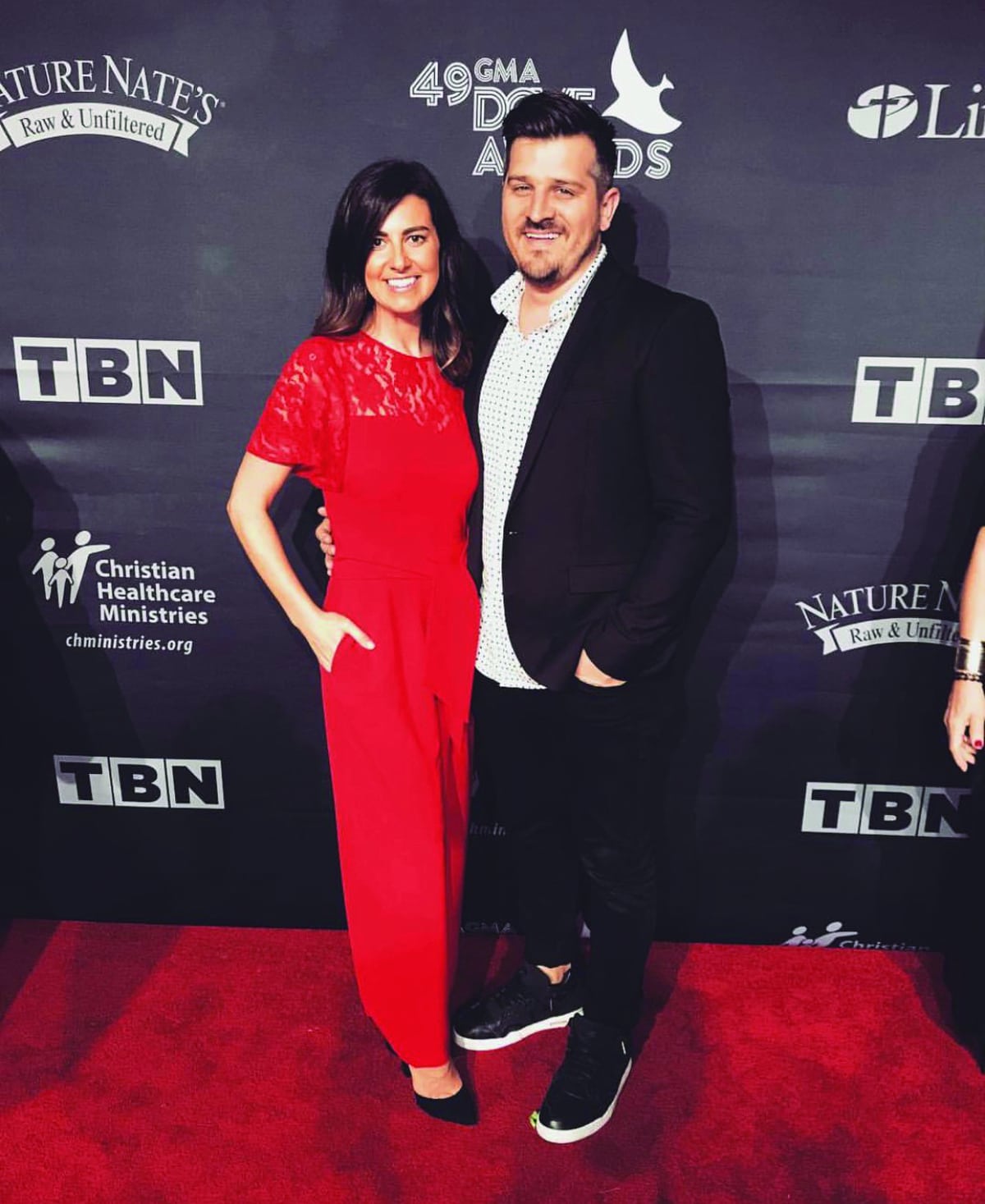 Jacob Sooter, who grew up in Pineville, has experienced a successful career in the Christian music industry. He and his wife Meredith Andrews each have won multiple Dove Awards. They performed a special Christmas concert Dec. 8 at Sooter’s home church, First Baptist Church in Pineville.

By John Marcase, Special to the Message

PINEVILLE (LBM) – Pineville native Jacob Sooter was doing what he does best and what he does for a living – writing Christian music – when one of his co-writers that morning in Nashville asked if he was going to the Dove Awards later that night.

Sooter knew he had been nominated for Worship Song of the Year with “Spirit of the Living God.” It is a song he co-wrote with Mia Fieldes and which his wife, Meredith Andrews, was the lead singer as part of the Vertical Worship project.

What Sooter did not know was he also received a nomination for Children’s Music Album of the Year, “Bright Ones.”

“When he asked if I was going to the Dove Awards, that’s when I found out,” Sooter told the Baptist Message.

He went and “Bright Ones” won.

“It was a real treat and honor. The best thing is I tied Meredith now that I have two Doves,” he joked.

A dry and sharp sense of humor has been part of Sooter’s life since birth.

He grew up in Pineville, the oldest of two children to Alexandria attorney Vic Sooter and his wife, Molly, who teaches piano in Central Louisiana and who has performed with the Rapides Symphony Orchestra.

So, music has been part of Sooter’s life from the beginning, too.

Moreover, he and his sister, Katelyn Parks, had no choice but to learn piano at an early age.

While in college, he also led contemporary worship services at the First Baptist Church in Jackson.

He received his break when he toured with Jeremy Camp in 2007-08, playing keyboards for the Contemporary Christian Artist who has earned 32 number one hits.

Sooter quickly discovered he did not want to grow and raise a family as a touring artist.

“There are guys that are great at living on a tour bus and being a dad and managing it,” he said. “I’m not one of those guys. When I was single and with 11 other guys on the tour bus, it was an incredible, once-in-a-lifetime experience.

“When you are married and have kids, it’s totally different. I had fun, but then I got married, and next I had kids, and I didn’t like it” [my former bus-tour life].

In 2011, Sooter won his first Dove Award, along with Andrews, for collaborating with Paul Baloche on “How Great is the Love.” The song tied with Chris Tomlin’s “Our God” for Worship Song of the Year.

Now he is a staff writer at Essential Music, which is a division of Provident Label Group. The label is home to artists such as Stephen Curtis Chapman, Third Day, Casting Crowns, Matt Maher, Tauren Wells and Vertical Worship.

Andrews continues to tour and is scheduled to release her first live solo worship album on Dec. 7. The next night, she will be in concert at the church in which Sooter grew up, First Baptist Pineville.

“It will be me and Mere and maybe one other instrumentalist,” Sooter said. “It’s really cool. It’s always more nerve-wracking performing in front of family and friends than when it is before strangers.

“I haven’t lost the wonder I had when I was 16 years old and used to sneak into the church sanctuary to play the grand piano. It’ll be nice to be home.”

It will also be a rare chance to see Sooter perform. He rarely travels anymore, except when Andrews asks, or one-off appearances, such as a recent show with Jesus Culture and the K-Love Awards.

“I would rather stay at home, write and produce and stay with the kids,” he said.

He and Andrews have three children, sons Maverick (8), Remy (5) and daughter Frankie (4). Needless to say, music is a major part of the children’s lives.

“All the kids will do piano,” said Sooter. “I didn’t have a choice, and I’m thankful for that.”

Tickets are on sale for Meredith Andrew’s concert at FBC Pineville on Saturday, Dec. 8 at 7 p.m. through First Pineville’s website at fbcpineville.net ($12 in advance, $15 the day of the show).

By Lane Corley MADISONVILLE, La. - In Luke 15, Jesus gives us a glimpse of the Father’s heart for the lost. 1. Those far from God liked Jesus and he liked them (verse 1). Is that true of me? When was the last time someone far from God approached me? Am I available to them? Building relationships with … END_OF_DOCUMENT_TOKEN_TO_BE_REPLACED