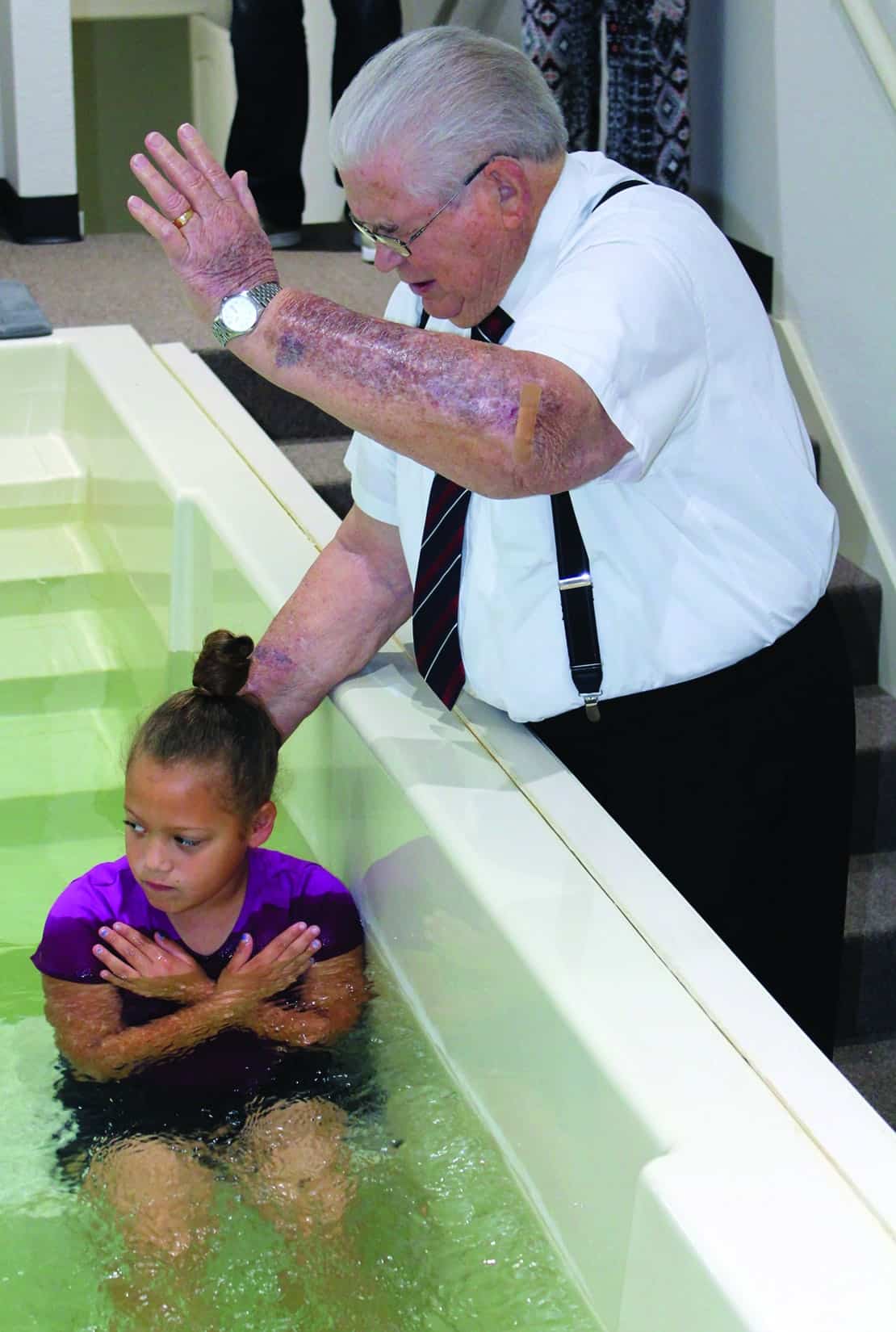 LEESVILLE, La. (LBM) – Vernon Baptist Association Director of Missions Morris Goins normally is not at a loss for words, but a request from his great-granddaughter Kaylee Pew, 8, left him speechless.

“PawPaw, would you baptize me,” Pew asked him shortly after she admitted she was a sinner and needed Christ in early March.

Four weeks later, Goins was at Canaan Baptist Church in Leesville to fulfill the request during a special time that was shared by family, friends, and a supportive church family.

“It’s the closest thing to being in the holy presence of the Lord,” Goins told the Baptist Message, regarding baptizing new believers.

He added that baptizing Kaylee, March 28, was “more than I can explain – it’s one of the highest honors and privileges a great grandfather can have in his life.”

“What I saw that Sunday was a multi-generational approach by a great-grandfather, parents, and Sunday school teachers,” Nolde said. “It was obvious how much time they invested in this young girl, and it ended with her making a genuine decision to follow Christ.”

Pew’s baptism was the ninth since October at Canaan Baptist, which has seen a resurgence in baptisms, evangelism, and discipleship since in-person services resumed in early May 2020. Until then, public gathering restrictions from COVID-19 mandates had forced them to conduct services exclusively on You Tube and Facebook since March 2020.
Sunday morning worship attendance has increased from 120 before the pandemic to 150 a year later, and several Sunday morning Bible study classes have outgrown their classrooms.

Nolde said the congregation is considering whether to add onto existing buildings to accommodate the growth, noting that the young adult class has increased from six members in late 2019 to more than 30 at the end of March. He also said a men’s ministry Bible study that began March 25 drew 21 for the first meeting and a women’s ministry group that started March 18 attracted 26 for the initial class.

He further shared that members presented Christ to community members whom they sheltered and served three meals a day in September 2020 after Hurricane Laura. Likewise, they served food and water to area families impacted by the other major storms that struck in 2020.

Even the children and youth have participated in missions through delivery of meals to homebound individuals and mailing hand-written cards to area nursing home residents, he said.

“I have seen our church grow closer together and be a light to this community,” Nolde said. “We have grown spiritually and numerically during this last year and worked together more.

“Seeing an increase in attendance is always a good thing,” he said, “but witnessing your members develop a deeper love for Christ and their community is always exciting.”

By Chuck Kelley Rarely does Hollywood contact a Southern Baptist seminary, but rarely is not never. One day location scouts for a major motion picture to be filmed in New Orleans called NOBTS and asked to tour the campus. They were looking for a place that with a bit of movie magic could be made to look like the … END_OF_DOCUMENT_TOKEN_TO_BE_REPLACED