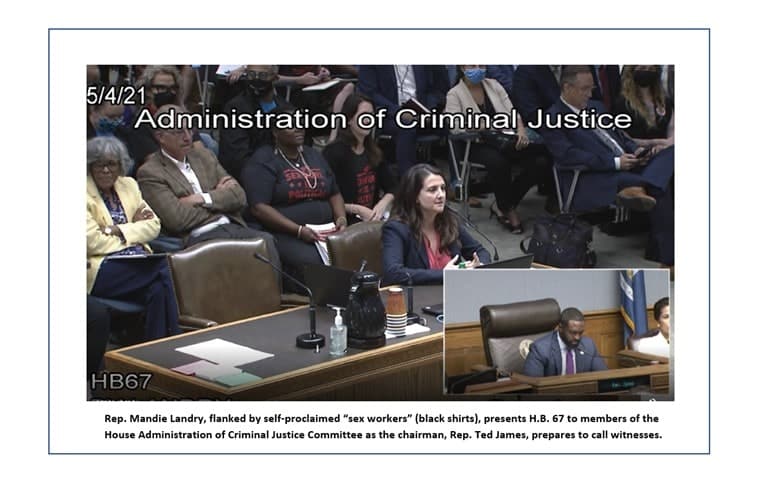 BATON ROUGE, La. (LBM) – Witnesses mocked the authority of pastors and questioned whether morals should be a consideration for a bill that would have elevated prostitution to legal status. But H.B. 67 was pulled, May 4, by its author, Rep. Mandie Landry (D) of Orleans Parish, when it was clear her proposal did not have majority support on the committee.

Bruce Reilly, deputy director of Voice of the Experienced, “a growing network of currently incarcerated people, formerly incarcerated people (FIP) and their loved ones,” according to the group’s website, told the committee “there’s things that are criminalized in our society that are moral and there’s things that harm other people” and argued “there isn’t a victim” in prostitution.

“We heard earlier about gambling, which 30 years ago was illegal; and I’m sure some of you have different opinions, morally, about whether gambling is okay or not,” Reilly said. “Maybe your pastors have different opinions about whether it’s okay or not. Things that are legal you don’t have to partake in. You might have a moral opposition to Bama fans living in the state of Louisiana, but the fact is they can live here.”

She further pleaded for the committee to ignore pastoral authority.

Other women testified to their personal situations and how prostitution helped them feed their families or to pay for education, even medical school.

But the witnesses who opposed the bill raised issues about the exploitation of women and children and the inextricable link between sex work and sex trafficking.

Will Hall, director of the Louisiana Baptist Office of Public Policy, said that despite having the strictest laws in the nation against human trafficking, according to the states’ attorneys general around the country, Louisiana still was plagued with human trafficking because of the I-10 and I-20 corridors. “All of the experts warn that if you legalize prostitution, you will increase human trafficking,” he added. “Before you legalize prostitution, I would ask that you pause and think about the law of unintended consequences.”

Glory Blankenship, representing Purchased: Not for Sale, a ministry to sex trafficking victims in Shreveport, told the committee that prostitution was a matter of sexual abuse, and quoted a sex worker who told her, “It simply is not possible to separate the sex industry from sex trafficking and the empowerment of some from the exploitation of others.”

“This bill would grant greater freedoms to institutions and individuals to further exploit vulnerable populations that we want to protect,” Blankenship explained. She also said it was important to reduce incarceration rates for prostitutes, but that greater justice for sex workers and survivors “has to include holding those who would exploit them accountable and not granting them more freedoms.”

Kathleen Benfield, a staff member of Louisiana Family Forum, a pro-family public policy ministry, said she was moved by the many personal stories shared during the three-hour hearing and it was her prayer that those who have been traumatized by prostitution would receive healing and help. But in sharing her empathy for the victims, she also raised concerns about how the “demand side” of the issue was addressed in the proposed legislation.

“This bill decriminalizes every aspect of prostitution,” Benfield testified, noting that H.B. 67 legalized purchasing sex, enticing persons to sell sex and operating brothels. Underscoring her point, she asked, “Do we want to become a destination for sex tourism?

Benfield said she realized that women who have resorted to prostitution to earn a living “need our compassion,” but she rejected decriminalizing the aspects of prostitution which contribute to victimizing women.

She also mentioned the moral consequences of legalizing prostitution.

“I believe it is a dangerous proposal that sends a bad message to our children that this is a way to elevate themselves out of poverty,” she said. “I pray that our state can offer more to our citizens than commercial sex.”

Other witnesses pointed out alternative models to the actions proposed in the bill, including the Nordic Model which decriminalizes prostitutes and criminalizes buyers. Some spelled out more concerns about the negative aspects of legalizing prostitution.

In the end, with prompting from committee members, Rep. Landry voluntarily deferred H.B 67, essentially killing the bill for the 2021 legislative session.

By Rebecca Holloway PINEVILLE, La. – For years, I have read and heard the statement, “We need to hold life/our family/our possessions with an open hand.” The idea is that we are not in control of our lives or anything else on this planet. God is in complete control of all things and has the power and right to … END_OF_DOCUMENT_TOKEN_TO_BE_REPLACED