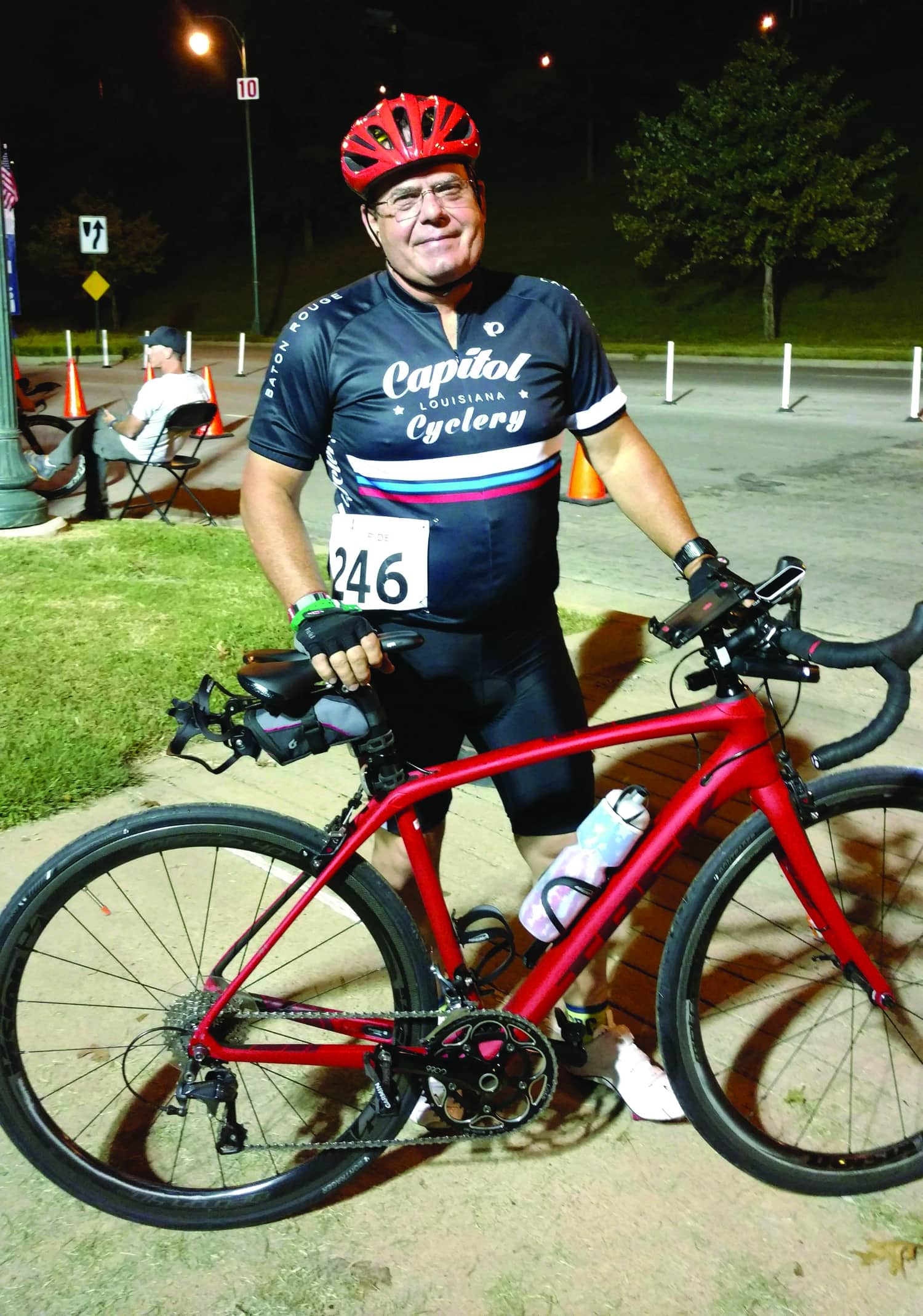 Marvin Leleux used his bicycle for philanthropic reasons, but also because he has looked for ways to share the Good News of Christ. Submitted photo

RINGGOLD (LBM) – Marvin Leleux has a passion — to pedal with purpose.

Leleux, the pastor of Springhill Baptist Church in the Ringgold community, most recently rode his custom-designed bike in the June 15 St. Jude Big River Ride in downtown Memphis to help raise funds for the children’s research hospital.

“So far, I have raised about $5,000 for this race,” Leleux said about the pledges and donations he has collected to date for the upcoming 60-mile bicycle course.

He rides his composite carbon fiber Trek Domane SL6 Pro bicycle for philanthropic reasons, but Leleux believes he is a disciple, too, actively looking for “God moments” with others along his cycling route.

As a cyclist, Leleux has an opportunity to make a connection with people who “normally would not talk to a pastor.” “God rides along with me. He puts me in touch with people who do not go to church and who do not know Him. I get a chance to share the Lord with people from all walks of life and even from all different types of faith and denominations,” Leleux noted.

“I get asked questions all the time. I cross paths with these people, and they don’t feel badgered or judged. This is what I call intentional relationship evangelism. I meet the people in the world where they exist,” Leleux said adding that the bike marathons have led to many ministerial opportunities.

Recently, he completed a bike marathon for the Children’s Miracle Network tour.

But at the start of the ride, in front of several hundred riders and enthusiasts, he was given a special request.

“As a participant, I was asked to pray, and I got to pray in Jesus’ name. I love to tell people about Jesus,” Leleux said.

He was not always a marathon bicycling enthusiast, but he grew up liking to ride. Over time, he stopped cycling altogether. But a health crisis four years ago made Leleux realize he needed to start some type of exercise again.

“I was severely overweight and not doing well with my health. I’m 5-foot-6- inches tall and I weighed almost 250 pounds. I had to get back into shape to do ministry, so I started out walking,” Leleux recounted, who at that time was serving as a pastor in Many.

Then his brother-in-law asked him to run in a race with him to raise money for St. Jude Children’s Research Hospital. Using the app “C25K” on his phone, which stands for “couch to 5 K running,” Leleux said he started preparing for the event run.

“I was soon jogging, and I ran my first 5K for a little girl who was very ill. I raised $5,000 for her,” Leleux said, adding that he ran several other 5K races for the children’s hospital.

But in 2017, he decided to pursue his passion for bicycling again. His first bike was an aluminum chassis Domane AL3, which he now calls his “knock about bike.”

“I hate running, but I love cycling. I wanted a hybrid ride and so had a road bike designed for me,” Leleux recalled, adding that he was hooked up to a computer for three hours for the tailor-made bicycle.

He created a website page for donations and rode 68 miles in 4 1/2 hours in Memphis for St. Jude’s.

He joined the Shreveport Bicycle Club, and the members have been a good support group for his cycling efforts, Leleux noted.

“I rode 64 miles in a little more than four hours for the Children’s Miracle Network in Shreveport, and there were a lot of hills,” he said.

Last year, he had trained for the “rite of passage” 100-mile ride in Memphis, but two weeks before the event, it was cancelled.

“I’m 59 years old. Last year at 58, I had to do a lot of training to prepare for that ride. I rode 900 miles to prepare for that 100-mile ride,” Leleux recalled, but since he was working through an injury, he was relieved in a way that the ride had been cancelled.

This year he has logged about 800 miles in preparation for the July ride in Memphis. Setting his alarm clock for 6 a.m., Leleux rides his bike for about 2-3 hours every day, with special motivation.

He is riding in memory of Coleson Shaw, who passed away at the age of 16 after battling cancer for years. The boy was the grandson of one of his deacons, Larry Shaw.

“I was there with Coleson when he drew his last breath. Riding for St. Jude has become very personal to me. Coleson touched my heart like few people have,” Leleux said.

Lately, Leleux has not limited his “wheel power” to bicycling, although that is his passion. He recently raced a four-wheeler with his son-in-law in Texas at a Monster Truck Show. Even at that event, the Lord opened doors for him to minister.

“They found out I was a pastor and asked me to offer the opening prayer. There were about 3,500 people there,” Leleux said. He said everyone should be involved in something where the Gospel of Christ can be shared.

“We need to have relevance with our community. We all need to be doing Christianity authentically. We are not of this world, but we are in this world, and we all need something out there that we can latch onto and be authentic about,” Leleux said.

By Stewart Holloway PINEVILLE, La. (LBM) - For over two months now, my oldest son, my mom, and I have spent most Friday mornings at my mom’s clearing overgrown brush. What was planted as a fruit orchard in an open pasture almost thirty years ago has grown into a wilderness of every kind of vine and tree … END_OF_DOCUMENT_TOKEN_TO_BE_REPLACED