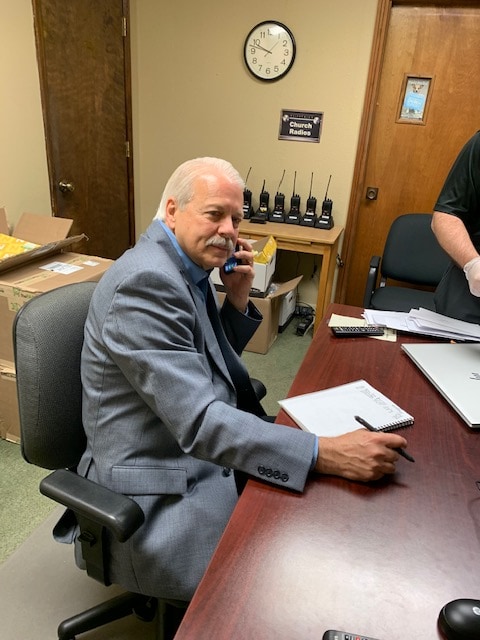 Alfred Stevens, chairman of the Parkview Baptist Church board of trustees, received call-in votes for the congregation's new pastor March 22.

The Baton Rouge congregation had to replace a traditional “meet and greet” with a virtual one when the governor issued successive orders restricting gatherings to no more than 250, then 50 and now 10 people. And instead of postponing the vote, church leaders took a step of faith, using measures to ensure the integrity of the process and moved ahead with balloting via text messages, phone calls and the drop off of paper “yays” and “nays.”

When the tally of all the different inputs was completed, members had voted DeGeorge as their new pastor, by a 98 percent margin.

DeGeorge will begin his ministry in the state capital, May 1, after serving for three years as the pastor of Calvary Baptist Church in Tupelo, Mississippi.

BY ALL MEANS POSSIBLE

“It worked well with the interaction he had with people online during the weekend,” Associate Pastor of Worship and Creative Arts Chris Turner told the Baptist Message. “Lots of people said they appreciated the opportunity and got a good bit of information that they might not have had otherwise during an informal meet and greet over punch and cake.”

Turner was referencing a virtual “meet and greet” on Saturday during which questions, emailed ahead of time, were answered, and, a panel discussion took place between church leaders and DeGeorge.

The following day, DeGeorge preached his message, broadcast on the church website. Afterwards, church members voted by calling, texting, and dropping off their ballots at the church through a drive-thru station. Turner said nearly 400 members voted.

Turner said if churches are hesitant about holding a vote on a pastoral candidate during this present situation the nation is facing, consider creative options.

“In our situation, we felt like we needed to go ahead and move forward since our candidate had already announced to his church he was coming in view of a call,” Turner said. “He felt really strong about sticking with it and following through with the plans.”

Turner said, maintaining integrity of the process is part of the key to success in such novel situations.

The staff created a spreadsheet with members’ names and personal information. Those who called in or texted their votes had to confirm the date of birth in their church record. Meanwhile, those who dropped off their ballots had to sign the paper slip and likewise, confirm personal information on the spreadsheet.

“Churches should consider following through and see what different methods they could use that is best for their people,” he said. “Everyone is learning how to be flexible in this season. If the Lord’s in it, you will be okay.”