New Orleans Baptist Theological students participated in evangelism training and shared the Gospel with 255 people the week before Crossover in Birmingham, Alabama. The students recorded 19 professions of faith.

The students participated in evangelism training, visited 1,100 homes and shared the Gospel with 255 people in neighborhoods throughout the city June 3-7, NOBTS officials reported.

They also joined 400 Southern Baptist teams, June 8, and collectively shared the Gospel with 10,409 homes during Crossover, Southern Baptists’ evangelistic outreach in the host city for the annual meeting. Combined, the teams engaged in 1,817 Gospel conversations and 364 of these individuals they encountered declared Christ as Lord, Crossover organizers reported. Another 2,251 persons sought prayer.

The first recorded salvation took place on the students’ first day in the city. Tony Thibodeaux, pastor of Barataria Baptist Church in Lafitte, and two other students led Hannah, 7, to faith in Christ during an in-home visit.

“For God to move the way he did was really special,” Thibodeaux told the Baptist Message. “It really set the tone for the rest of the week.” 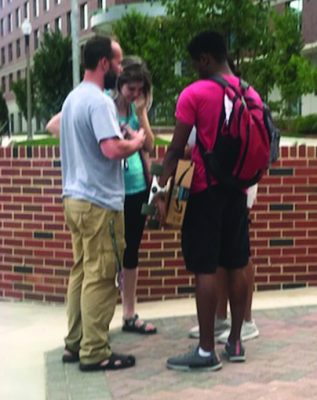 Days later, Brandon Foottit, student pastor at the First Baptist Church in LaPlace, shared the Gospel with Demarkus, a student with the University of Alabama at Birmingham.

Foottit had wrapped up a morning of evangelism training classes and felt led to sit with Dermarkus in-stead of eating with his fellow NOBTS students in the UAB cafeteria, where the New Orleans team dined throughout the week.

“He told me that he grew up in church but never trusted Christ,” Foot-tit said. “I had been praying earlier that day that God would give me those opportunities. I’m thankful I was able to be a part of someone realizing they had a need to accept Jesus as Lord.”

During Crossover, Foottit left encouraged by the spirit of the churches in Birmingham who will reap the benefit of the spiritual decisions that were made.

“I went with one member, Sammy, door to door sharing Jesus with people near his neighborhood,” Foottit said. “By the end of the day he was in tears and said he grew so much in so little time of going out to see God at work through simple Gospel conversations.”

By Joe McKeever Freely you have received; freely give. (Matthew 10:8) JACKSON, Miss. (BP) -- Dr. Watson was complimenting Sherlock Holmes on a brilliant observation no one else had noticed. "Of course," Holmes remarked. "It's what I do." Forgiveness and grace -- that's what we believers do. Here is … END_OF_DOCUMENT_TOKEN_TO_BE_REPLACED