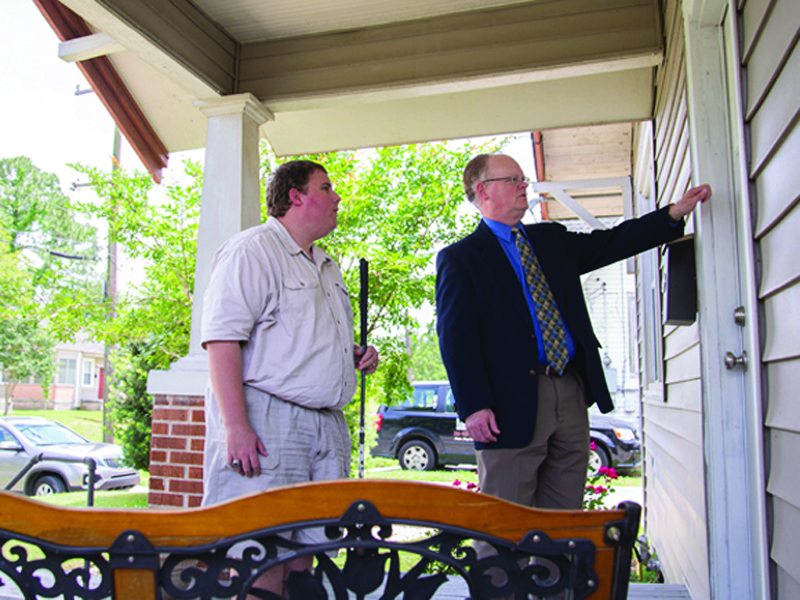 Seven faculty members and 10 students formed teams to knock on doors and give away free batteries for home smoke alarms.

NEW ORLEANS – When the team of 17 New Orleans Baptist Theological Seminary (NOBTS) students and  faculty members stepped into the neighborhood under storm-threatening skies April 21 to hand out 9-volt batteries, they did not know what the Lord would do.

Three members of the community near the seminary came to faith in Christ.

“The Lord gave us a window of one hour before the rain came down,” said Preston Nix, professor of evangelism and evangelistic preaching at NOBTS. “Two people…in two different locations had just finished praying to receive Christ when the rain started.”

Seven faculty members and 10 students formed teams to knock on doors and give away free batteries for home smoke alarms. The teams partnered with Gentilly Baptist Church (GBC) to show love to neighbors with the goal of sharing the gospel.

Two weeks later, on May 5, seven students and seven faculty members went into the community. As a result of their witness one person came to faith in Christ.

“This involvement of our NOBTS faculty and students on the streets of our city shows once again that when we obey Christ’s Great Commission, the Lord has people ready to respond,” said Ken Taylor, professor of urban missions at NOBTS and GBC pastor. “As we increase our involvement in the neighborhoods of our city we will meet more of those ready to accept the Good News of Jesus.”

Michael Pogue, master’s student, said his team explained to neighbors that the batteries were a gift of love from Gentilly Baptist Church. After asking neighbors if they attended church, Pogue said he transitioned to the Gospel by saying that “more important than where you go to church is where you’ll spend eternity.”

“We are to share Jesus with the lost,” Pogue said. “And an act of love as simple as giving batteries to a stranger can soften their heart just enough to receive the gospel we share with them.”

By Rebecca Holloway PINEVILLE, La. – For years, I have read and heard the statement, “We need to hold life/our family/our possessions with an open hand.” The idea is that we are not in control of our lives or anything else on this planet. God is in complete control of all things and has the power and right to … END_OF_DOCUMENT_TOKEN_TO_BE_REPLACED