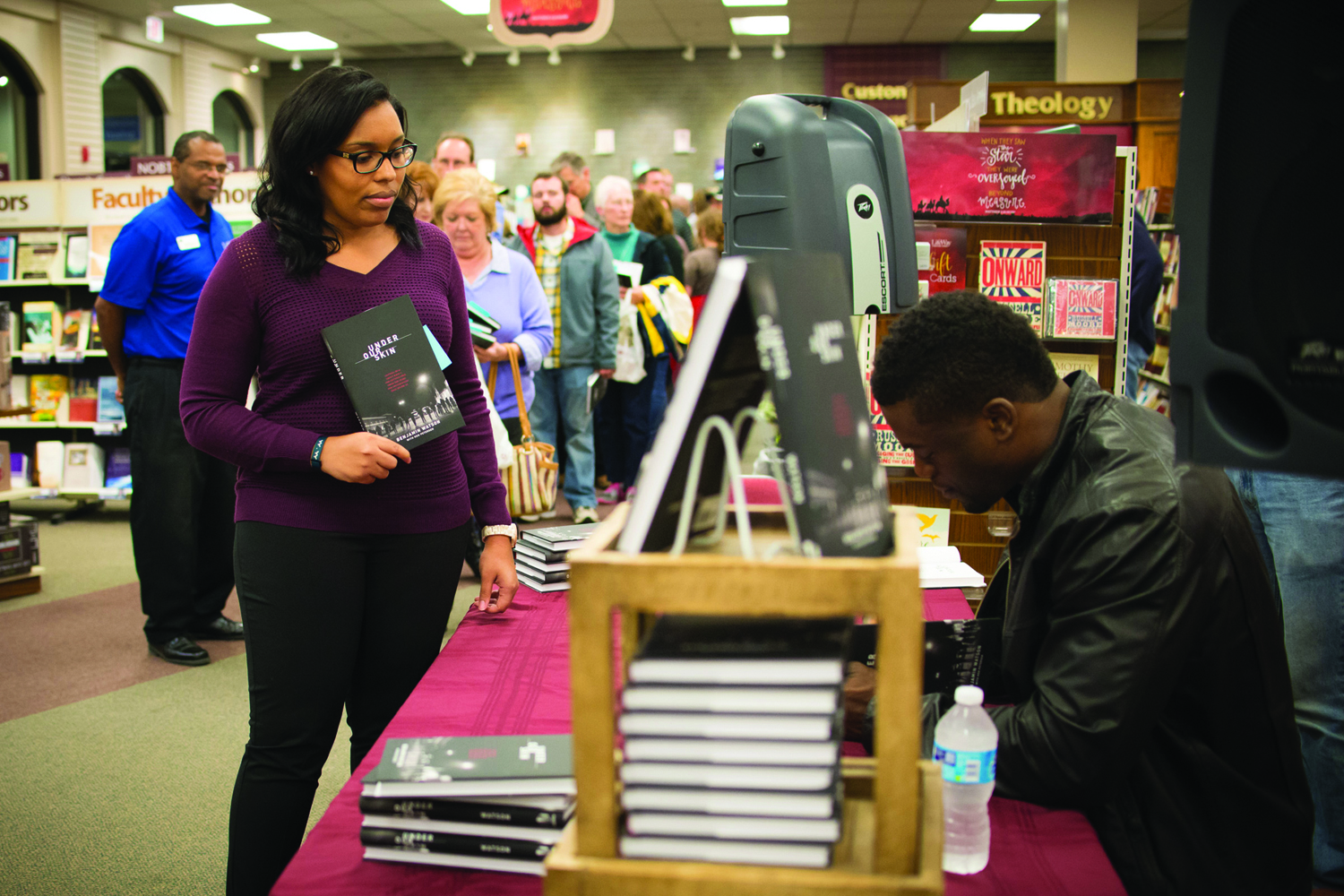 New Orleans Saints tight end Ben Watson signs copies for waiting fans of his book "Under Our Skin: Getting Real About Race -- And Getting Free from the Fears and Frustrations that Divide Us" at the LifeWay campus store at New Orleans Baptist Theological Seminary Nov. 24. Photo by Marilyn Stewart

The solution is “changed hearts” in Christ, Watson said.

The event fell on Nov. 24, the one-year anniversary of the ruling in the racially charged Ferguson, Mo., case of the shooting death of Michael Brown. Watson’s book, “Under Our Skin: Getting Real about Race — and Getting Free from the Fear and Frustrations that Divide Us,” expands on his lengthy Facebook post that resonated with readers the day after the news broke that officer Darren Wilson would not face criminal charges for the shooting death of Brown.

“[Race] is something that keeps on coming up,” Watson said. “It’s something we’re always talking about and it’s not seeming to be going anywhere.”

Calling his book “part manifesto, part memoir,” Watson told the line of fans that snaked past shelves and out LifeWay’s door that he put his thoughts to paper after seeing a public reaction to the verdict that seemed to split along racial lines.

“I was conflicted because so much was tied into it. I wanted to work out my thoughts,” Watson said. “I didn’t even know how to post,” Watson quipped, saying he had to call on a friend for help.

Soon afterwards, Watson found himself behind the microphone taking questions on the issue of race. The book followed.

“This voice and this issue need to be part of a national conversation to push us closer to becoming the country, the church of our ideals,” Kelley said. “Watson gives us a terrific model on how and why Christians must engage in all conversations about things that matter.”

The chapter titles give clues as to Watson’s feelings after the Ferguson verdict: Angry; Introspective; Embarrassed; Sad and Sympathetic; Offended; Encouraged; and others.

Watson’s book and his Facebook post –- which included words that later became chapter titles — call readers to examine attitudes and thoughts. For some, it is a call to repentance, Watson told the crowd. For others, it’s a call for forgiveness, he added.

Written with Ken Peterson, the book came together during the off-season and through late-night consultations during the Saints’ summer training camp, Watson said. 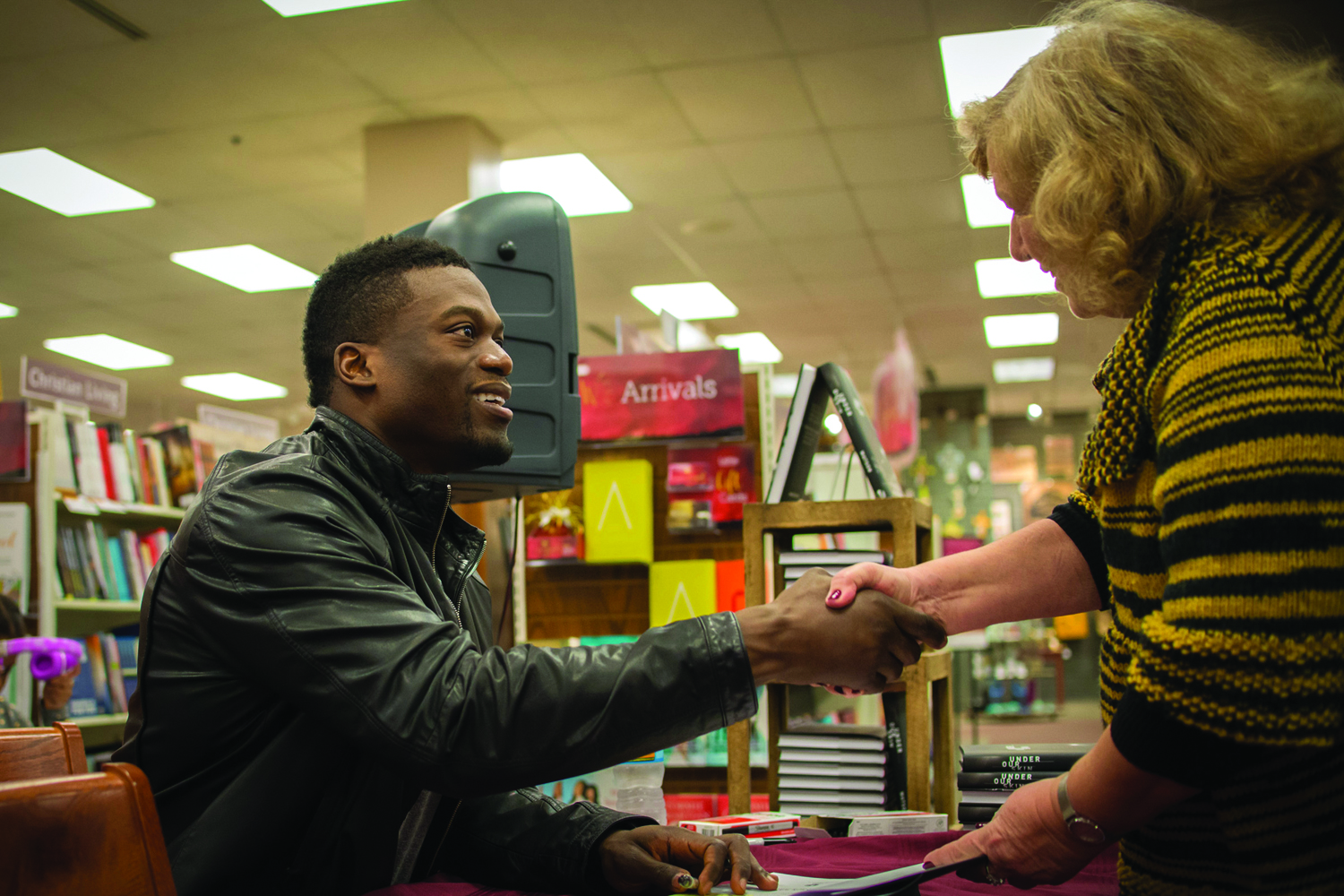 New Orleans Saints tight end Ben Watson shakes hands with a fan before signing a copy of his new book “Under Our Skin: Getting Real About Race — And Getting Free from the Fears and Frustrations that Divide Us” that calls for racial reconciliation in Christ. Photo by Marilyn Stewart

In the book, Watson draws from personal experiences such as being pulled over while driving his wife Kirsten to the hospital for the birth of their first child or how one of his white high school teammates took an unexpected step toward reconciliation.

“Really, the whole point and hope of Under Our Skin is that you find your place along this whole racial narrative and that you’re able to take time to think about some of the deep-seated issues or prejudices that you may have,” Watson said.

Yolanda Hingle, a mother of three sons and co-leader of a New Orleans-area teen girls’ ministry, said she was nervous about meeting Watson because she doesn’t follow football.

“After he spoke for only a few minutes, I realized that this man was so much more than just a football player,” Hingle said. “He is a strong man of God. He is a family man. He’s a man that seeks to further the Kingdom of Christ while breaking down racial barriers and just happens to be a talented football player.”

Watson took questions after his opening remarks. Several thanked him for taking a stand.

“It’s not something that’s easy. We all have something to lose,” Watson said. “With any accomplishment, there is a cost. Being a Christian is no different. So, I’m always praying for strength for when my time for paying a huge cost comes. It can only be done in His Spirit…. Standing is not done in our own strength.”

As each person in the waiting line stepped up for a signature, Watson penned his name and beside it “Gal. 3:28.”

Watson lives in New Orleans with his wife Kirsten and their five children. The book is published by Tyndale Momentum, an imprint of Tyndale House Publishers, Inc.

“We live in a fallen world and we all have our specific prejudices and biases and assumptions,” Watson concluded. “It is through Him we get a changed heart and through that changed heart we can love each other as He would have us to.”

By Lane Corley Olive trees produce one of the most desired and sought after fruits around the world. The trees can live for thousands of years. The olive and the olive tree is spoke of in the Bible on numerous occasions. Including a few references to family life, like in Psalms 128:3 – “Your children will be … END_OF_DOCUMENT_TOKEN_TO_BE_REPLACED