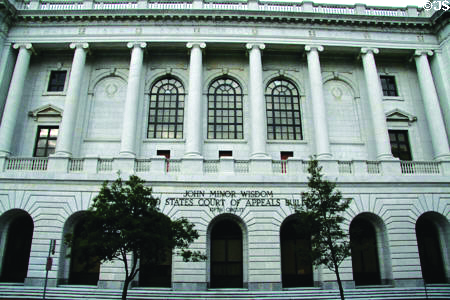 BATON ROUGE – Louisiana Attorney General Jeff Landry and State Rep. Mike Johnson (R-Bossier City) both applauded the unanimous decision by three judge panel of the U.S. Court of Appeals for the Fifth Circuit Feb. 23 to issue a stay of a federal district court opinion that had declared unconstitutional Louisiana’s statutory requirement each physician who performs outpatient abortions must have admitting privileges at a nearby hospital.

Seven months later, Judge John W. deGravelles ruled in favor of the abortion providers, concluding that the law was unconstitutional on its face and must be enjoined.  The state then sought a stay of the ruling pending a full appeal.

“Our emergency request for a stay of the lower court’s ruling on Act 620 was granted by the Fifth Circuit today,” said Landry in a news release. “I applaud the Fifth Circuit’s decision to halt the erroneous ruling and allow Louisiana’s pro-life and pro-woman admitting privileges law to go into effect.

“We are delighted by the Fifth Circuit’s decision today,” said Johnson, a constitutional law attorney who served as co-counsel in the case defending the state’s law. “The three judge panel has stated clearly the plaintiffs’ claims have no merit and this is a reasonable, common sense restriction to protect women’s health. The ruling today will help save lives.”

In its 15 page opinion, the appeals court called it “puzzling” the plaintiffs challenging the state law ignored the Fifth Circuit’s prior precedent upholding similar admitting-privileges requirements.

The Unsafe Abortion Protection Act of 2014 (or, Act 620) requires that abortion providers be able to admit patients to a nearby hospital in the event of complications. The law passed 88-5 in the Louisiana House of Representatives and 34-3 in the Louisiana Senate.

“Act 620 is a reasonable, common-sense safety measure,” added Landry. “Anyone who has outpatient surgery would expect her doctor to admit her to a hospital in the event of complications; women seeking abortions should have the same assurance of prompt care.

“The Fifth Circuit agreed with Louisiana’s argument that the District Court ignored legal precedent and evidence showing this law is a legitimate way of protecting the health and safety of Louisiana women,” said Landry. “Today is a victory for Louisiana, whose elected legislative representatives overwhelmingly passed Act 620.”

Like Landry and Johnson, State Representative Katrina Jackson (D-Monroe), the author of Act 620, was also elated over the decision and praised the panel.

“This stay by a unanimous three judge panel of the Fifth Circuit is a victory for the health and safety of women who are harmed by abortion. I am very pleased the Legislature’s interest in protecting both women and unborn children is being respected by the court.”

“Today’s decision puts the District Court’s ruling on hold while our appeal goes forward. I will continue to do all I legally can to protect the health and safety of every Louisiana woman,” said Landry.

The full appeal is expected to be heard by the appeals court in the coming months.

The ruling comes at a time when three clinics in the state are no longer performing abortions. Earlier in the month, Causeway Medical Clinic in Metairie shut its doors.

Thursday, the Baton Rouge Advocate reported that the Delta Clinic of Baton Rouge on Colonial Drive stopped performing abortions and now only gives abortion counseling. Also on Thursday, a receptionist who answered the phone at Bossier City Medical Suite also said their facility was no longer performing abortions, with Louisiana Right to Life confirming the news.

That leaves just two clinics in the state who are performing abortions. They are Hope Medical Group for Women in Shreveport and Women’s Health Care Center in New Orleans.

By Don F. Mabry ALEXANDRIA, La. (LBM)-- The number of churches in our country constantly is changing and it is very difficult to acquire information from the various denominations, but estimates indicate that there are 330,000 Christian churches and congregations in the United States today. But the question … END_OF_DOCUMENT_TOKEN_TO_BE_REPLACED