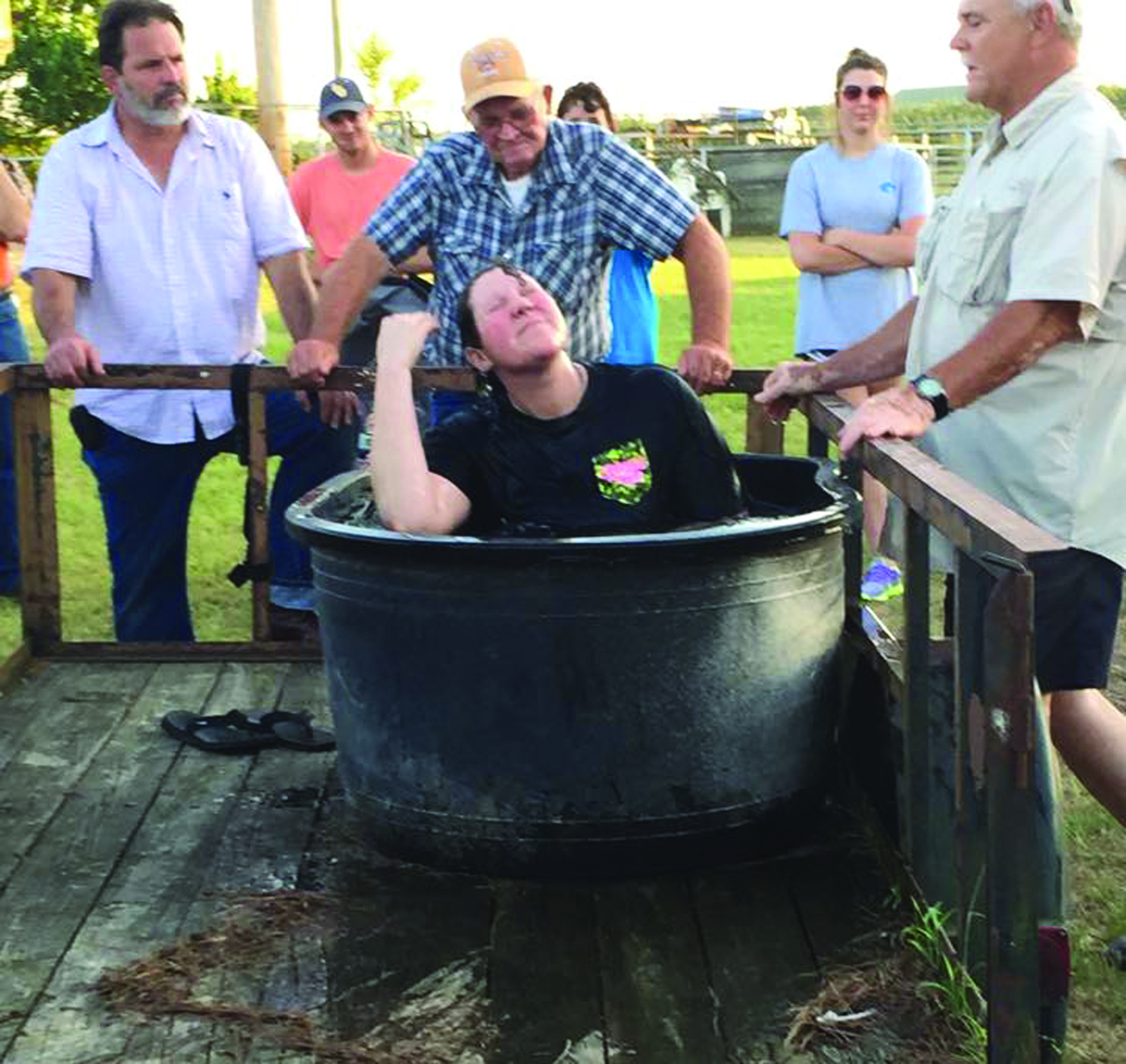 Bobby Kranz (right) baptizes Evelyn Rugg in a horse trough. Since Kranz became pastor of Mt Ararat Baptist Church in Downsville, 20 people have been baptized, including eight on one Sunday.

Facing personal setbacks in his own life, the long-time pastor was searching for God’s direction and wondering if he would preach again, so he prayed for direction.

God answered those prayers and led him to a church seeking a pastor who would join them as they headed down the path in search of brighter days.

When he became pastor of Mt. Ararat Baptist Church in Downsville, March 2015, attendance for Sunday morning worship was around 30. Today, the congregation regularly has 100 in worship and has baptized 20 people, including eight on one Sunday.

Kranz believes the growth is nothing he has done as pastor but rather a gift from the miraculous hand of God.

“If I had to boil it down to one word, it’s brokenness,” Kranz said. “This church was broken-hearted over strife. They realized if something didn’t change, and quickly, the life of the church could be gone.

“I’ve been at a lot of churches and I’ve never seen anything like it,” he continued. “It’s all to the glory of God. It’s not about me. It’s about Him.”

Early in his Christian life, he attended a church where Wayne Jenkins, now the Evangelism and Church Growth Director for Louisiana Baptists, served as pastor. There, Kranz learned about the value of fulfilling the Great Commission by reaching the lost.

He decided to apply the same principle at Mt. Ararat.

They began by distributing gift bags to those in the community and inside homes of guests who visited on a Sunday or Wednesday. Inside each bag were Gospel tracts, a New Testament, pens and a coffee cup with the church logo.

“Rather than sit and cry about the condition of the church, we began going outside its walls,” he said. “Everywhere we went, we gave people these bags. People began to come and God began to save people.”

Two of those who accepted Christ and were baptized are Derek and Elizabeth Joy Littleton.

For 15 years, Derek and Elizabeth Joy lived in the same home together and had four children but were not married.

Their lives were transformed in August 2015, after receiving an invitation from long-time member C.C. Bayles to attend Mt. Ararat.

Derek and his wife Joy said that day during the worship service he first felt the presence of the Holy Spirit, and he committed his heart and life to Christ.

Meanwhile, unknown to him, the Holy Spirit similarly presented Himself  to Elizabeth Joy.

When the invitation was offered, Derek came forward and moments later, Elizabeth Joy, who had been listening to the service over the intercom in the nursery, walked into the worship center also to make a public re-dedication.

A few weeks later Derek and Elizabeth were two of eight people baptized on Sunday, and, they also were married.

“We didn’t preplan it or talk about it before the service,” Derek said. “We were both in separate rooms and felt drawn by God to come down the aisle. This church has shown me the right way to treat people and proves Christians can make an impact where they live.”

Elizabeth Joy said she knew she and Derek needed Christ in their lives since the pair met in 2000.

“If it had not been for the church’s persistence in reaching out to us and seeing the light of Christ shine through them, this may never have happened,” she said. “I love them all with a passion I can’t describe. I’m so grateful to have eternity to praise Him, because it will take an eternity to thank God for saving my family and leading us to Mt. Ararat.”

C.C. Bayles, who along with his wife Sue issued the invitation to Joy Littleton during a visit at a local retail store, said he has never seen a church change so much in just a short period of time.

Even with the growth already experienced byMt. Ararat, Kranz believes God is not done with them, yet. He prays the congregation will continue to have a burden for the lost on their hearts.

“I knew all along what God was doing is a very unusual thing, particularly in a church our size,” he said. “But there is just no limit to what He can do.

“That is why I want us to stay humble, broken and thankful,” Kranz said. “I want us to continue to be burdened for the lost and the people who aren’t in church. I know God will honor our efforts if we continue to do so.”

By David Jeremiah EL CAJON, Calif. (BP) - Something strange happens to the psyche of a nation in difficult times. The downtrodden begin to resent government and wealthy corporations and individuals, seeing them as out of touch with, if not the cause of, their plight. Desperation can lead to a reversal of … END_OF_DOCUMENT_TOKEN_TO_BE_REPLACED