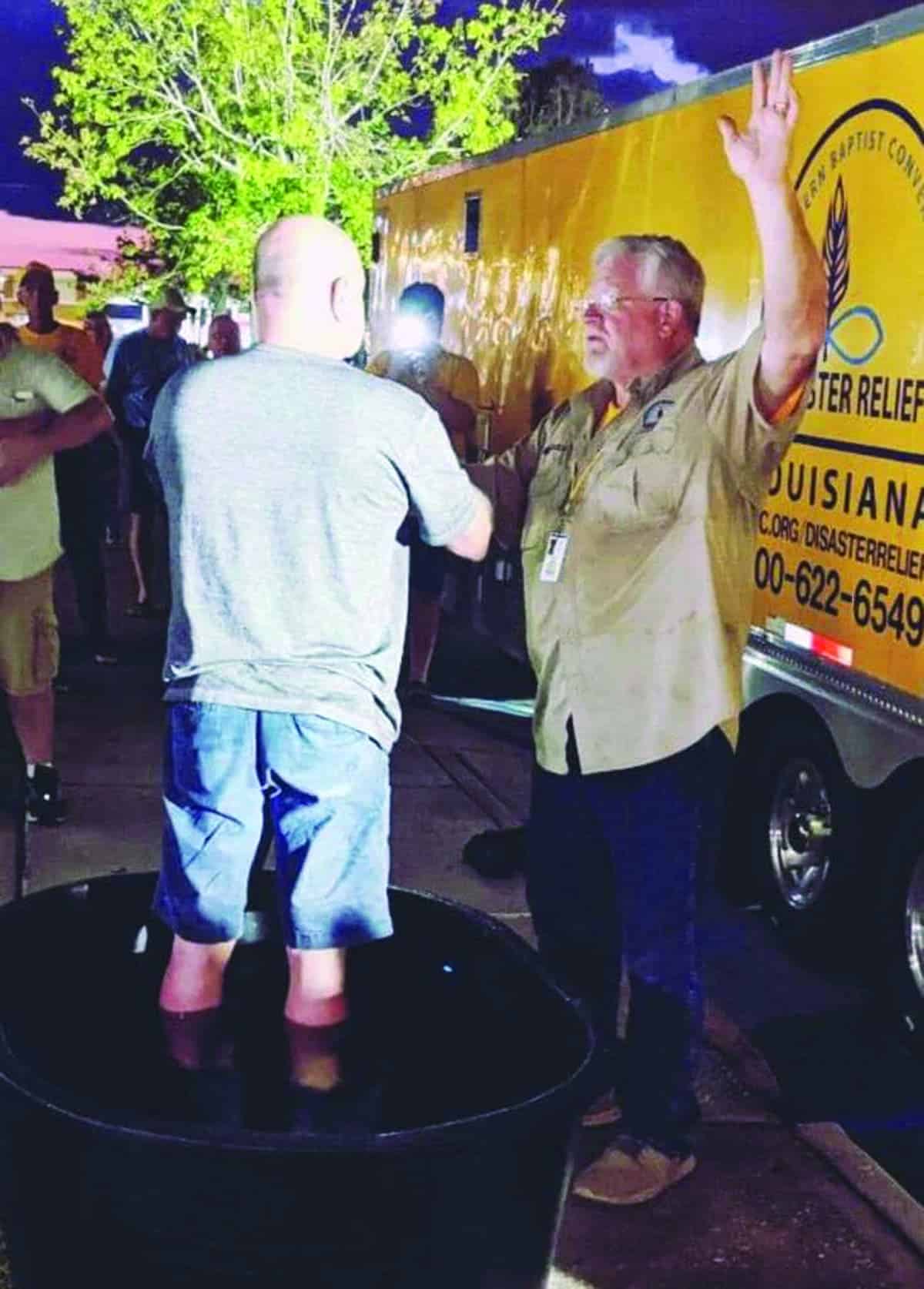 Louisiana Baptist State Disaster Relief Coordinator Gibbie McMillian baptizes truck driver Len Miller Sept. 25 on the parking lot of Trinity Baptist Church, Lake Charles. McMillian and other Southern Baptist Disaster Relief volunteers had devloped a relationship with Miller while he was at the church for a month after Hurricane Laura. Submitted photo

Instead of returning home immediately to Wauchula, Florida, Miller felt compelled to remain at the church and assist with relief efforts for the next four weeks. Throughout the course of his time there, Miller developed a relationship with disaster relief volunteers and, having accepted Christ 10 years ago, he was finally convicted of his need to be obedient in publicly sharing his faith through believer’s baptism.

“I was thankful Trinity Pastor Steve James gave me the authority to baptize Len, whom we struck up a great friendship with over time,” McMillan told the Baptist Message. “He accepted Christ years before but when he saw the witness of Christ being lived out before him each day he finally was brought under conviction that this is what he needed to do for that next step in his faith.”

Miller was among 1,428 people who disaster relief chaplains shared the Gospel with from late August until September 27 in areas of Louisiana impacted by Laura. Of those who heard the Good News, 297 turned to Christ. Disaster relief volunteers also distributed 1,955 Bibles.

McMillan said in the midst of all the work, which included 413,846 meals prepared at three sites in the Lake Charles area, 1,485 chainsaw jobs, 185 temporary roofing jobs, 137 debris removal jobs and 10,640 showers offered, disaster relief volunteers planted the spiritual fruit that led to the decisions.

“It’s always nice when we can offer hope to people and they accept it,” McMillan said. “When they do, it comes at a time when they are hurting and open to hearing the Gospel. To see their faces light up with excitement when they hear the Good News and even accept Christ is really good.”

James said his congregation was humbled to play a part in so many coming to Christ and others receiving much needed encouragement.

“To be on the front line was such a blessing,” James said. “People come up to me and say, ‘Thank you for what your church and the disaster relief volunteers did during Laura.’ They could see the hands and feet of Jesus, literally.”

Randy Garrett, state disaster relief director for the Arkansas Baptist State Convention, said he was overjoyed that a relationship between his state’s chaplains and Miller produced spiritual fruit.

“The baptism happened because of a relationship built with the man over time,” Garrett said. “Every time our chaplains and others interacted with him, we would always share the Gospel. Two weeks after that first encounter, he told us he wanted to get baptized. It is such a rewarding thing to see Arkansas Baptist people step up and help their fellow man after a terrible disaster. I am so humbled God would use us in that way to further the Kingdom.”

“We cannot continue to respond with this magnitude without more volunteers from our Louisiana Baptist churches stepping up to be trained and ready to respond when needed,” McMillan said. “We praise the Lord for this response and we will gladly assist in the formation of other groups who feel led to respond. Thanks for being a part of this great work of bringing help, hope and healing to hurting people.”

By Don F. Mabry ALEXANDRIA, La. (LBM)-- The number of churches in our country constantly is changing and it is very difficult to acquire information from the various denominations, but estimates indicate that there are 330,000 Christian churches and congregations in the United States today. But the question … END_OF_DOCUMENT_TOKEN_TO_BE_REPLACED