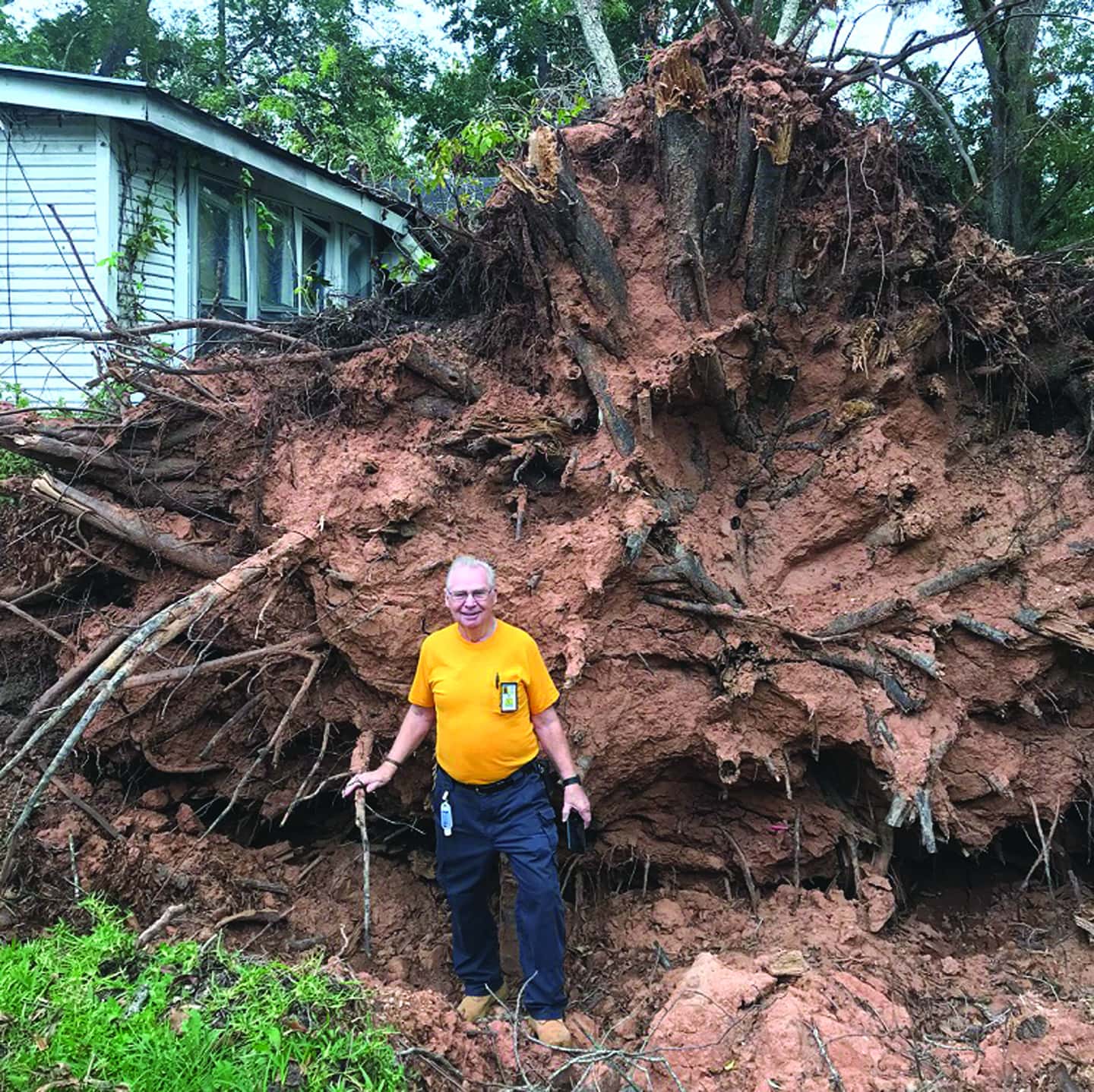 Bill McCumbee, a member of North Carolina Baptist Men disaster relief team, stands in front of a massive root ball of a large pecan tree that fell across three homes on Dartmouth Street in Alexandria.

ALEXANDRIA, La. (LBM) – Alexandria, Louisiana, is 130 miles north of the shoreline where Hurricane Laura made landfall with 150 mph winds. Still, a number of residents in this crossroads city were not spared catastrophe from the fierceness of the storm and yet some received blessings despite tragic damage to their homes.

The North Carolina Baptist Men disaster relief teams were some of the first out-of-state responders to arrive in Alexandria to offer aid in the form of tarps, bottled water and food, and to deploy chainsaw crews to remove trees that had fallen on homes or that threatened private houses.

Tony Hodge and Bill McCumbee, members of East Belmont Baptist Church in Belmont, North Carolina, were dispatched Sept. 16 to Dartmouth Street and later, Sept. 18, to 15th Street to perform needs assessment and also to prioritize work in these neighborhoods.

“We were writing up what it would take to help the people get back in their homes,” McCumbee recalled. “They had such a story that touched Tony and me such that Tony decided to hold back the reports” (to personally oversee completion of the work orders instead of submitting them through normal channels). 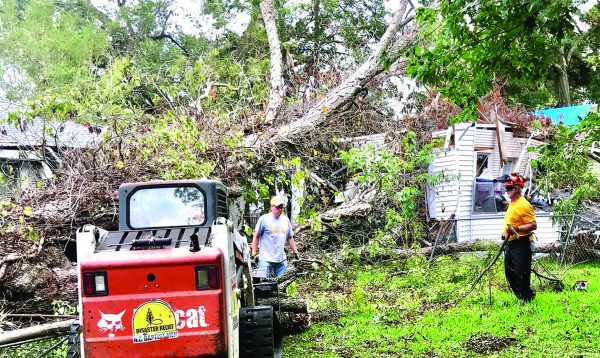 A Bobcat was utilized by members of the North Carolina Baptist Men disaster relief team in Alexandria as they worked to remove a massive pecan tree uprooted by winds from Hurricane Laura. The tree was so large that when it fell it damaged three homes on Dartmouth Street. Submitted photo

The damage was “quite extensive,” according to Hodge. “A single tree basically obliterated the back of two houses and was on top of a third. The exposed root ball must have been 12-15 feet high.”

Back at Philadelphia Baptist Church, Horseshoe Drive, which was hosting disaster relief volunteers from multiple states, Hodge and McCumbee were able to talk with team leaders from two North Carolina crews. Looking at the photos, they decided the massive job was a top priority because it would help three families in one project. The families were “elated” when he called that night to let them know teams would be on site in the morning, Hodge said.

“The next day we had 19 people working on that street, not counting the two of us” Hodge noted, pointing at himself and McCumbee. “The community was looking around, and one of the guys we call ‘the preacher,’ he goes and witnesses to six people.”

Mike Wolff, a chaplain with North Carolina Baptist Men, is “the preacher” who shared the Gospel with the crowd of neighbors who were watching the disaster relief teams remove the giant tree.

“It was a mammoth pecan tree,” said Wolff, a member of City Ministry Church, Charlotte, North Carolina. His first encounter that day was a young woman and her 10-year-old son who were sitting on their front porch across the street from the work site. After checking on their safety and needs, Wolff felt the unction to talk with the boy about birthdays as a means to share with him about being born again.

“He cocked his head and looked at me; and, I could see the mother looking at me in disbelief, too,” Wolff recounted, saying they were all ears by this time. He then related the account of Nicodemus’s night-time encounter with Jesus, emphasizing the need to be born of the Spirit and the flesh – two birthdays.

“In order for you to go to Heaven you have to have a birthday from your mother, but you also have to have a day where you birth the Spirit of God in your life,” Wolff said he told the young man. “My birthday is Oct. 16 and your birthday is April 27. But my second birthday is July 3. Do you have one of those?”

From that point, he shared the Gospel and what it means to be a child of God, and then had a similar conversation with the mother. Both shared with him that they had experienced changed hearts, and he helped them pray their first prayer as Christians.

That day, Wolff shared the Gospel with a family of five on that same street with four accepting Christ.

Two days later on 15th Street, where a giant tree had fallen on two homes, the same crew and Wolff teamed up, again – bringing relief from the storm’s fury and giving hope through Jesus. Three persons received salvation when all was said and done that Saturday – a homeowner, a brother and his wife.

“I have been a corporate chaplain for 25 years, but I don’t have much time in crisis care,” Wolff offered. “But here is what I know: Adults come to Christ more often during a time of crisis in their lives. These people were living in the middle of a crisis, and so they were looking for something.”

Wolff also remarked about the energy and endless compassion the volunteers displayed on those two projects.

“I have been amazed, amazed, at these men. I worked this week with a man who is 74 years old, and he worked me to death,” he admitted. “This morning as I was packing up, I was thinking about this week,” Wolff reflected.

“I’m 63 years old. I have four screws in my back. In February, I had my second surgery on my left knee and I’ve got bad feet. My feet have ached all week and then I’ve got poison ivy on my eyes. Yet, I wouldn’t trade this week for anything.

“Jesus was crucified, hanged on the tree until he died so that the entire world could see him. So I figure I can put up with a little discomfort for three or four days so that I can see nine come to know Him,” he shared. “So yeah, I will go home and it will take me days to get over this. But it’s been well worth it.”

By Joe McKeever “‘…your ways are not my ways,’ saith the Lord.”  (Isaiah 55:8) Keep an eye on how the Lord works in your life. You might learn something useful for the next time He wants to use you. This little couplet seems to sum up 90 percent of what Scripture and life teach us concerning the operation … END_OF_DOCUMENT_TOKEN_TO_BE_REPLACED