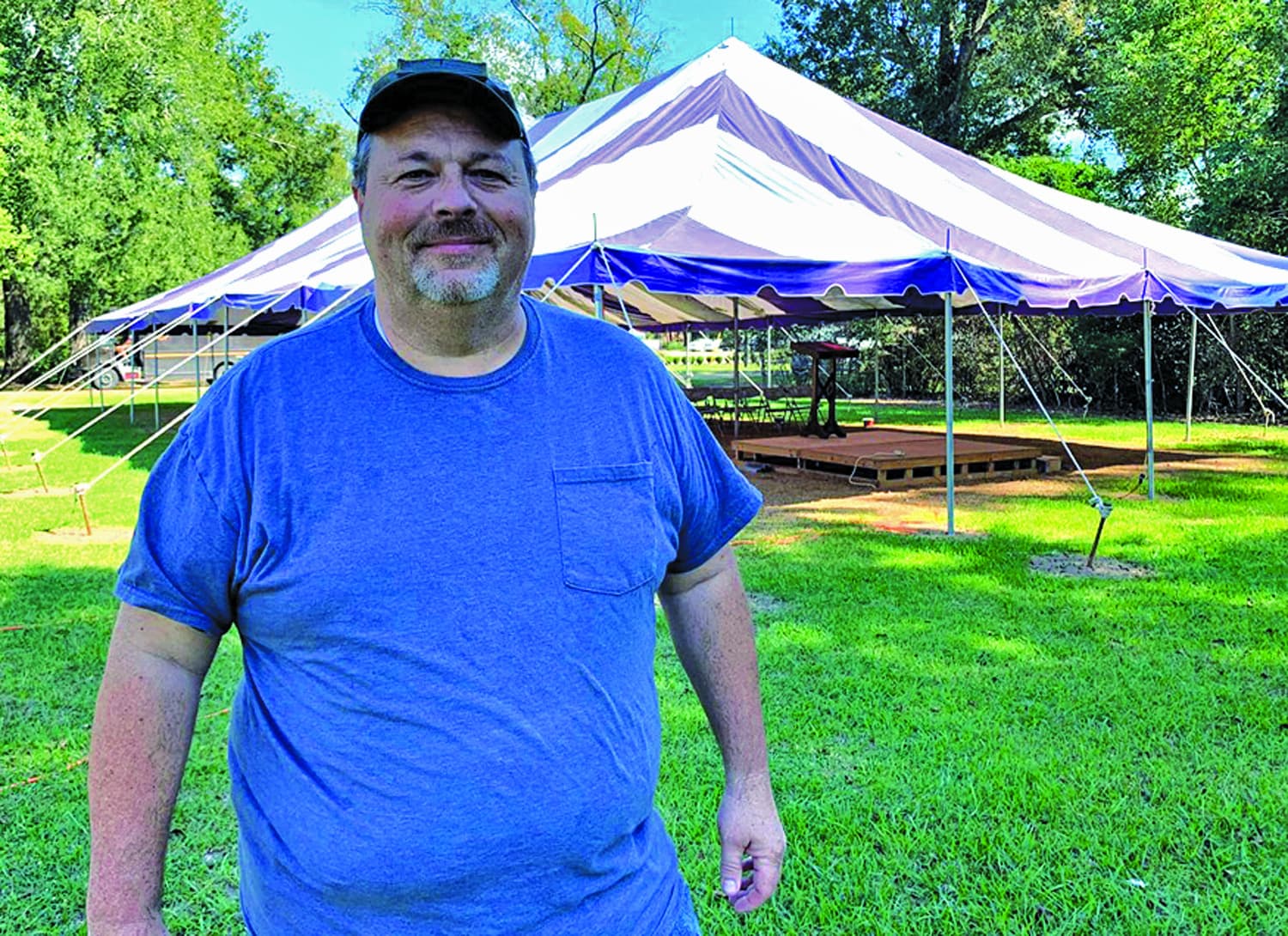 Cliff Spikes, pastor of Oberlin Baptist Church, believed God wanted him to set up a tent on his church property, and soon after, a group of Native Americans offered to come for a continuous revival meeting there. Brian Blackwell photo

OBERLIN, La. (LBM)—Native American pastors began a multi-week tent camp meeting with nightly evangelistic messages on the grounds of Oberlin Baptist Church, and organizers are optimistic that God may use the event to bring about revival across America.

The All Nations Camp Meeting kicked off Oct. 2 and is scheduled to continue through at least early November.

“Small numbers are coming right now but we are not discouraged,” Tony Robinson, pastor of Cornerstone Baptist Church in Oakdale and a member of the camp meeting planning committee, told the Baptist Message. “We feel like it will gain momentum as the word gets out and we feel like God’s in it. I don’t know when the last time was someone planned a meeting that went six weeks or indefinitely. We are just going to keep doing it until we feel like it has run its course or God says shut it down.”

The camp meetings have brought hope to a community that saw more than 50 homes flooded after Hurricane Barry dumped nearly 20 inches of rain in Oberlin in mid-July.

Shortly after Southern Baptist Disaster Relief teams mudded out some of the homes, a team from Day Mesa Baptist Church and another group of Native Americans from the Navajo reservation in Cuba, New Mexico, repaired a home in Oberlin, following a call for help by Randy Carruth, founder of the Louisiana-based I Am Able Ministries that reaches out to Native Americans.

Cliff Spikes, pastor of Oberlin Baptist Church, said the Navajo team returned to New Mexico with a burden to continue ministry in the Louisiana community.

“The Navajos came and were so encouraged by the response of our church and the love shown for them,” Spikes said. “They told us they never felt the presence of God like they did in Oberlin. They went back and spoke to their pastors and congregations and said, ‘We have to go back.’

“It got out all over the country about what happened in Oberlin,” he continued. “God was allowing the Native Americans an opportunity to come, step up and take care of those who have spent so much time and energy who have taken the Gospel to them on different mission trips to their reservation.”

For many years, the late evangelist Billy Graham believed that God would use Native Americans as catalysts for revival across the United States. During a conference in 1975 held in Albuquerque, New Mexico, Graham told Native American Christian leaders, “You are a sleeping giant, the original American. You are now awakening. Just around the corner, you may become a spiritual superpower in this country that could change not only America but the world.”

Though Spikes has no idea how God may use the camp meetings, he is hopeful for a mighty move of the Holy Spirit.

“We have seen that people from the smallest to the biggest have heard about what’s going on and want to come to Oberlin of all places,” Spikes said. “All I can tell you what God has done. I don’t know what He’s going to do going forward. We just purposed in our heart this is not a religious event. This is not just for Southern Baptists. It is for everyone who believes in the name of Jesus. All are welcome. We are asking everybody to put their minor doctrines and denominational flags aside and just come and celebrate the new life in Jesus Christ.”

By Stewart Holloway PINEVILLE, La. (LBM) - For over two months now, my oldest son, my mom, and I have spent most Friday mornings at my mom’s clearing overgrown brush. What was planted as a fruit orchard in an open pasture almost thirty years ago has grown into a wilderness of every kind of vine and tree … END_OF_DOCUMENT_TOKEN_TO_BE_REPLACED