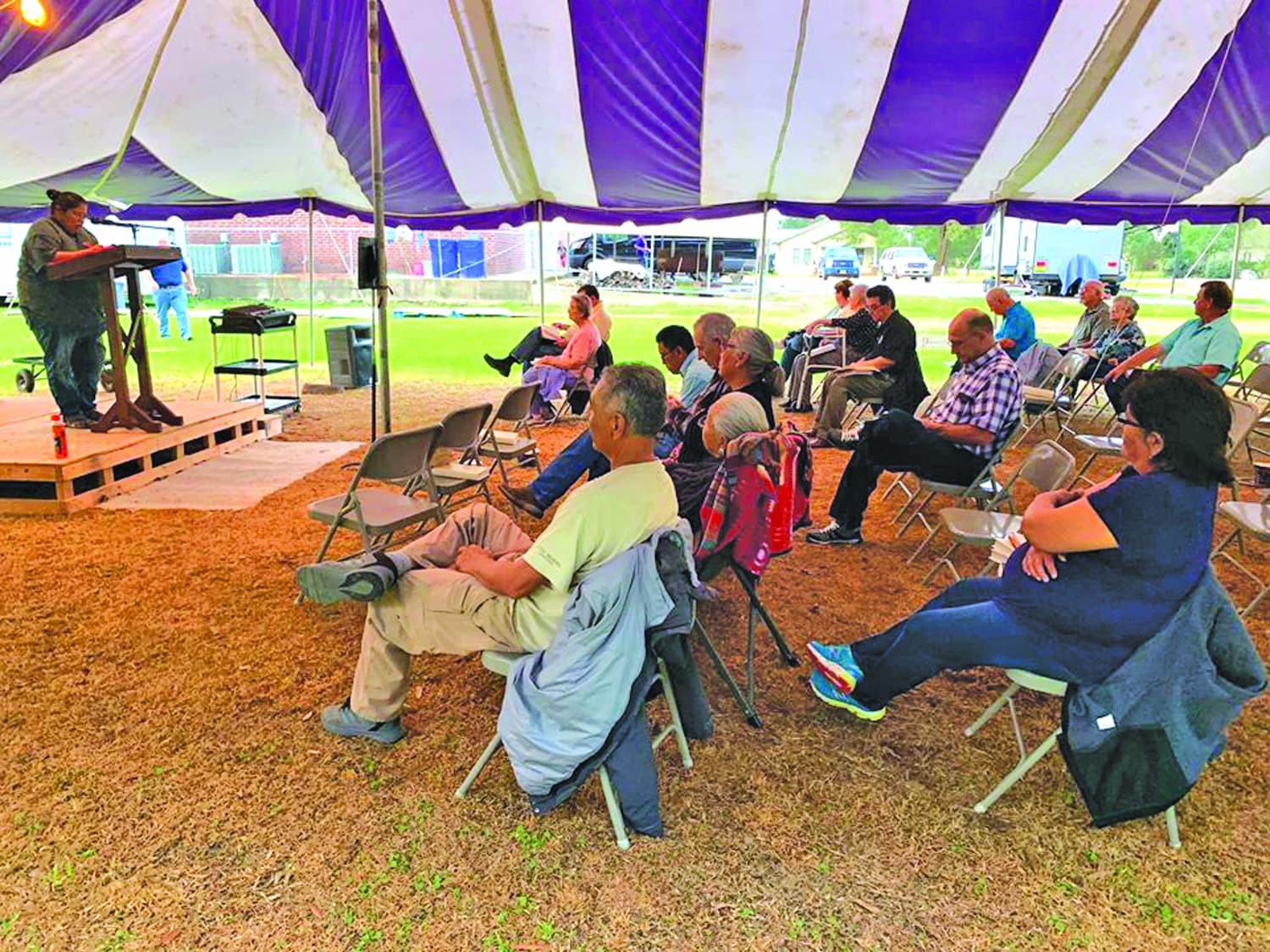 The All Nations Camp Meeting kicked off Oct. 2 under a tent on the campus of Oberlin Baptist Church, located in a community of 1,800 people. But it since moved, Nov. 2, to the grounds of the Coushatta Tribe of Louisiana in Elton.

You are a sleeping giant, the original American. You are now awakening. Just around the corner, you may become a spiritual superpower in this country that could change not only America but the world.

God often chooses to use the ‘least’ of the peoples, much like He used the Israelites when He delivered them out of bondage. “These people are connected to indigenous peoples around the world. Should they gain a sense of divine purpose for their lives, they could travel down an established highway to carry the good news around the world. Henry continues to pray that God will begin a revival in a least-likely place among a least-likely people so that God receives all the glory.

— Richard Blackaby, son of Henry Blackaby, founder of Blackaby Ministries, in a 2019 statement to the Baptist Message.

ELTON, La. (LBM)–An eight-week camp meeting in Oberlin and Elton has sparked revival in central Louisiana and among the Navajo nation in New Mexico, and there are no signs that it will end soon.

The All Nations Camp Meeting kicked off Oct. 2 under a tent on the campus of Oberlin Baptist Church, located in a community of 1,800 people.  But it since moved, Nov. 2, to the grounds of the Coushatta Tribe of Louisiana in Elton.

Randy Carruth, founder of Louisiana-based I Am Able Ministries that reaches out to Native Americans, said this is the first time such a revival has taken place on the Coushatta reservation.

Two people have professed Christ as Savior, but scores of others have repented for restoration of their fellowship with Christ during the revival, which has meetings scheduled daily through the end of March.

“When we read the two statements by Dr. Graham and Dr. (Henry) Blackaby and experience Native people coming from all over North America, paying their own way, by faith, you have to believe that we are no longer talking about revival,” Carruth said. “For we are in revival. Pray that this spark ignites throughout the world and many will come to Oberlin and Elton to experience what only God can do. May people come to Jesus in numbers we have never experienced before.”

Native Americans from 19 nations in seven states and Canada have supplied guest evangelists and musicians, and the Billy Graham Evangelistic Association has offered prayer support. Henry Blackaby Ministries also is aware of the events and is praying and seeking God in how they can assist.

John Cerneck, pastor of Indian Bible Church in Elton, which is the host church for the services on the Coushatta reservation, said God is moving among the Native Americans like at no other time in the 35 years he has served as pastor of the church. He said prayer has helped sow the spiritual harvest.

“Indian people love to meet other Indian people, so when the guest preachers from other Indian nations get up and share their testimony, it encourages the local people here,” Cerneck told the Baptist Message. “It’s hard to describe how God is moving. You have to come and experience it.

“I’ve read about awakenings and this feels like what I’ve read about,” he continued. “I was vaguely aware of what Billy Graham said regarding how God would use Native Americans to bring about revival, but I’m now believing and understanding what he referenced. No one knows the mind of God and only He knows how long this will continue.”

FROM DISASTER TO REVIVAL

After more than 39 homes flooded when Hurricane Barry dumped nearly 20 inches of rain in Oberlin in mid-July, Southern Baptist Disaster Relief teams mudded out some of the structures. A team from Day Mesa Baptist Church and another group of Native Americans from the Navajo reservation in Cuba, New Mexico, repaired a home in Oberlin for a week in August, following a call for help by Carruth.

Carruth and Cliff Spikes, pastor of Oberlin Baptist, began to call other Native American ministers to share about the physical need in Oberlin.  While Spikes and Carruth were discussing the response of the Native Americans to come and help, they felt that God directed them to put up a tent.

Within twenty minutes of that phone call God supplied the tent.  When the tent was assembled, Native American Christian speakers began to come from all over the United States and Canada.

Dennis Bridge, pastor of Day Mesa Baptist Church in Counselor, N.M., said once his team returned to the Navajo reservation, they saw a growth in worship and Sunday school attendance.

Since late October, Sunday morning worship attendance at Day Mesa Baptist has increased from 20 to nearly 50, and Sunday school attendance has risen from around 20 to nearly 40. Bridge has baptized three new converts and seen six people profess their faith in Christ.

“We thought we were going to Oberlin to help light the fire there, but what I didn’t expect was how God was going to grow our church and bring us into a state of revival,” Bridge said. “More people are showing up each week for Sunday school and discipleship training in particular. People are hungry for the Word and ready to go out to impact our area for Him.”

Bridge said eventually they hope to send out three-member teams to pastor-less congregations within a 50-mile radius from their church.

“I believe God is moving amidst the people,” he said. “People are excited about growing more in their relationship with the Lord. We are anticipating how God will move next among the Navajos.”

Irvinson Jones, the pastor of Dzil-na-oodilithi Bible Church in Bloomfield, N.M., was the guest evangelist for several of the worship services in mid-October. Jones enjoyed spending time with Louisianans during his time in Oberlin.

“So many years the Navajo nation has been receiving the blessings from Louisiana and other parts of America and the Navajo people thought why don’t we return the favor and take some of the blessings God has given us and go back and help our American brothers,” he said. “As far as revival, I believe it really depends upon the church’s desire for prayer. Revival can take place in any church that has a vision for prayer.

“Billy Graham said there is a sleeping giant and his reference to that was Native Americans,” he continued. “It could be any nation that has a vision and drive for the Lord. Personally I would tweak it just a little bit from Billy Graham and say it could be any nation that is given to the Lord. I don’t disagree with him. I think it’s true. If the Navajo people, if a Native people would really turn to the Lord, it would really make a difference. Pray for us, that God would move and reach many Native Americans, and others outside the reservation, with the Gospel.”

By Joe McKeever “‘…your ways are not my ways,’ saith the Lord.”  (Isaiah 55:8) Keep an eye on how the Lord works in your life. You might learn something useful for the next time He wants to use you. This little couplet seems to sum up 90 percent of what Scripture and life teach us concerning the operation … END_OF_DOCUMENT_TOKEN_TO_BE_REPLACED