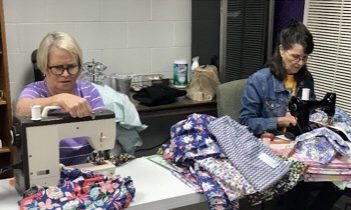 A sewing group meets every Thursday afternoon at First Baptist Church in Natchitoches. Hundreds of the outfits made by the women are distributed by various mission teams, while several hundred others are packed in the Operation Christmas Child boxes that are given to children in Third World countries around the globe. Submitted photo

NATCHITOCHES, La. (LBM)–Stacks of vibrant skirts with brightly colored flowers, paisley prints and turquoise-checkered patterns are piled neatly on tables, as a group of women at First Baptist Church in Natchitoches gathered around to pray over them.

“We have about 20 women coming now. They bring their sewing machines. Some don’t sew, but they cut out the skirts, iron or put in the elastic. Lots of hands go into the making of the outfits,” said Carol Colvin, a church member who helped start this women’s ministry two years ago. “We pray over every skirt we sew — and as we touch the fabric, we pray that each little girl will be blessed.”

The skirts, along with a coordinating T-shirt and matching flip flops, are destined for girls in impoverished countries throughout the world. Hundreds of the skirts already have been distributed this year to girls in Guatemala, Honduras, Mexico, Puerto Rico and Africa.

The sewing group meets every Thursday afternoon at the church. Hundreds of the outfits are distributed by various mission teams, while several hundred others are packed in the Operation Christmas Child boxes that are given to children in Third World countries around the globe.

“We just don’t give them a skirt. We offer them the gift of salvation by telling them about Jesus,” Colvin said.

She has traveled with a mission team to help give out the skirts in several countries. The children grin and express gratitude for the clothing.

“Giving them the skirts and shirts opens doors that allow us to tell them about Jesus. The little girls are so excited to have something new. Some of them have no shoes. They give you the biggest smile,” Colvin added.

Several of the women also join the mission teams in the distribution of the skirts.

Colvin said she goes on mission trips three times a year, including Honduras last year with a medical mission group. Surgical crews performed operations during the day while mission groups distributed rice and beans, as well as the skirt outfits. Meanwhile evangelism teams conducted VBS for the children and held revival services at night.

“It’s a tool we can use. We bring them a gift and tell them about an eternal gift that will last forever. The people are very receptive and hungry for the Gospel,” Colvin noted.

When the group first got started there were only about five women in the group and they sewed pillowcase dresses. But soon they decided to make skirts, and donations of fabric, thread, elastic and T-shirts started pouring in. The women would meet first for Bible study, and then sew for about three hours, making the skirts.

What began as a small group of women who wanted to make a difference with their stitching talents evolved into a sort of sewing sisterhood.

“It’s an amazing group of women. We began just by making skirts, but now we pray for one another and share our lives. There is a camaraderie, a sweetness. A fellowship developed through a ministry,” Colvin said.

Brenda Ingram, also a member of FBC Natchitoches, said she has been a part of the sewing ministry since its inception.

“I don’t sew, but I cut out the skirts or press the fabric or anything I need to do,” Ingram said.

She echoed the sentiments of Colvin as far as the closeness of the ministry members. The women have become like family and have a “therapy session” while sewing the skirts.

“We share our hearts with each other,” Ingram said.

On a recent trip to Honduras, Ingram said it was special to see each face light up with joy as the children received the outfits.

“The girls absolutely loved the skirts. They held them up and smiled big. It just made me feel the love of Christ,” she said.

The sewing ministry runs smooth and organized, like an assembly line, when making the skirts, member Regina Pierce said.

“And God has opened up many doors and donations,” Pierce said. A local Walmart was remodeling and put a lot of fabric on clearance, which was bought and donated to the ministry. Pierce said she was able to purchase five 75-yard rolls of elastic for about $30, and several people have donated T-shirts to be paired with the skirts.

“It’s been so wonderful to get to know people from different religions coming together for one common goal to bring glory to God. It’s a blessing to serve others, and God has provided,” Pierce added.

Other church groups have come to the Thursday night sewing sessions to observe how the ministry operates, and to get practical input on such things as patterns and elastic lengths.

Helen Antilley, also a team member, said the sewing effort is the right ministry fit for the First Natchitoches women.

“It may seem like a small thing, giving a skirt, but it can mean everything for a little girl who has nothing. It blesses my heart to show God’s love to them,” Antilley said.

By Waylon Bailey One of the most exciting stories in the life of Jesus occurred in his home town of Capernaum. As Jesus taught in what may have been the house of Simon Peter, four men carried their paralytic friend to the rooftop, tore the roof away, and lowered their friend right in front of Jesus. You … END_OF_DOCUMENT_TOKEN_TO_BE_REPLACED