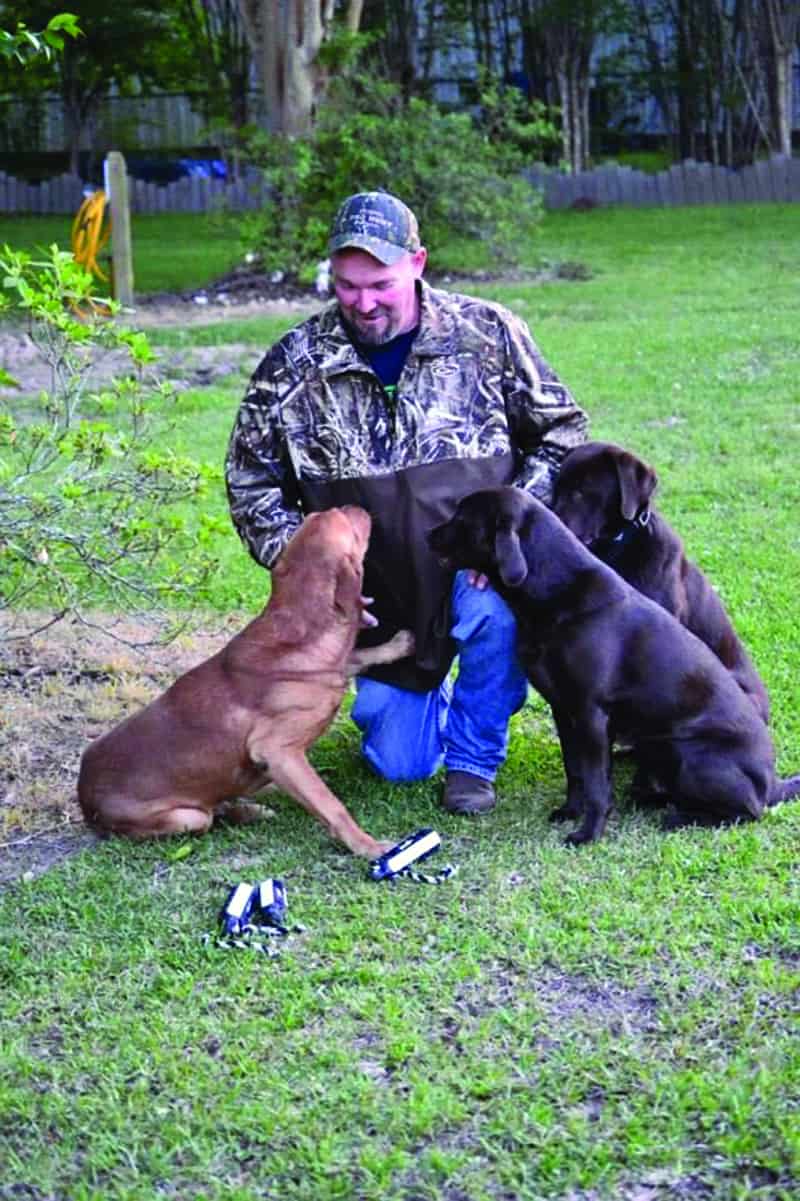 Johnny Morgan is surrounded by his three Labrador retrievers. Using his trained field dogs, Morgan, whose non-profit ministry is Obedience 2 Death, presents the Gospel in a unique way.

DENHAM SPRINGS – Johnny Morgan’s life has really gone to the dogs, and he could not be happier.

“I’m getting to use a passion of mine for God. It’s a blessing to use my Labrador retrievers to teach about obedience and present the Gospel of Jesus Christ in a unique way,” Morgan, the founder of the ministry, Obedience 2 Death, said.

The non-profit organization, based in Denham Springs, uses dogs as visual illustrations and blends humor with timeless biblical truths to show the power of obedience in the life of the believer. Morgan named his ministry based upon Philippians 2:8 “Jesus humbled Himself and became obedient unto death, even the death of the cross.”

“We have to die to ourselves,” Morgan said.

A life-long avid hunter, Morgan was raised around hunting dogs. While growing up he trained and hunted with rabbit dogs, coon hounds and squirrel dogs; and, he is amazed at the quirks and turns in his life that opened the door to a ministry for him where dogs help lead folks to the Lord.

“God can use anything we have if we make ourselves available. It’s very humbling to me that God is using a country boy and his dogs for His glory,” Morgan said.

Morgan, pastor of the Live Oak Baptist Church in Denham Springs since April 1, 2018, had served as the student minister and associate pastor of the church from 2004.

When a tornado ripped the roof off the worship center in 2008, the congregation started meeting in a local high school gym. In May of 2008, the church invited Hank Hough, the founder of Kingdom Dogs Ministry in Houston, to make a presentation. 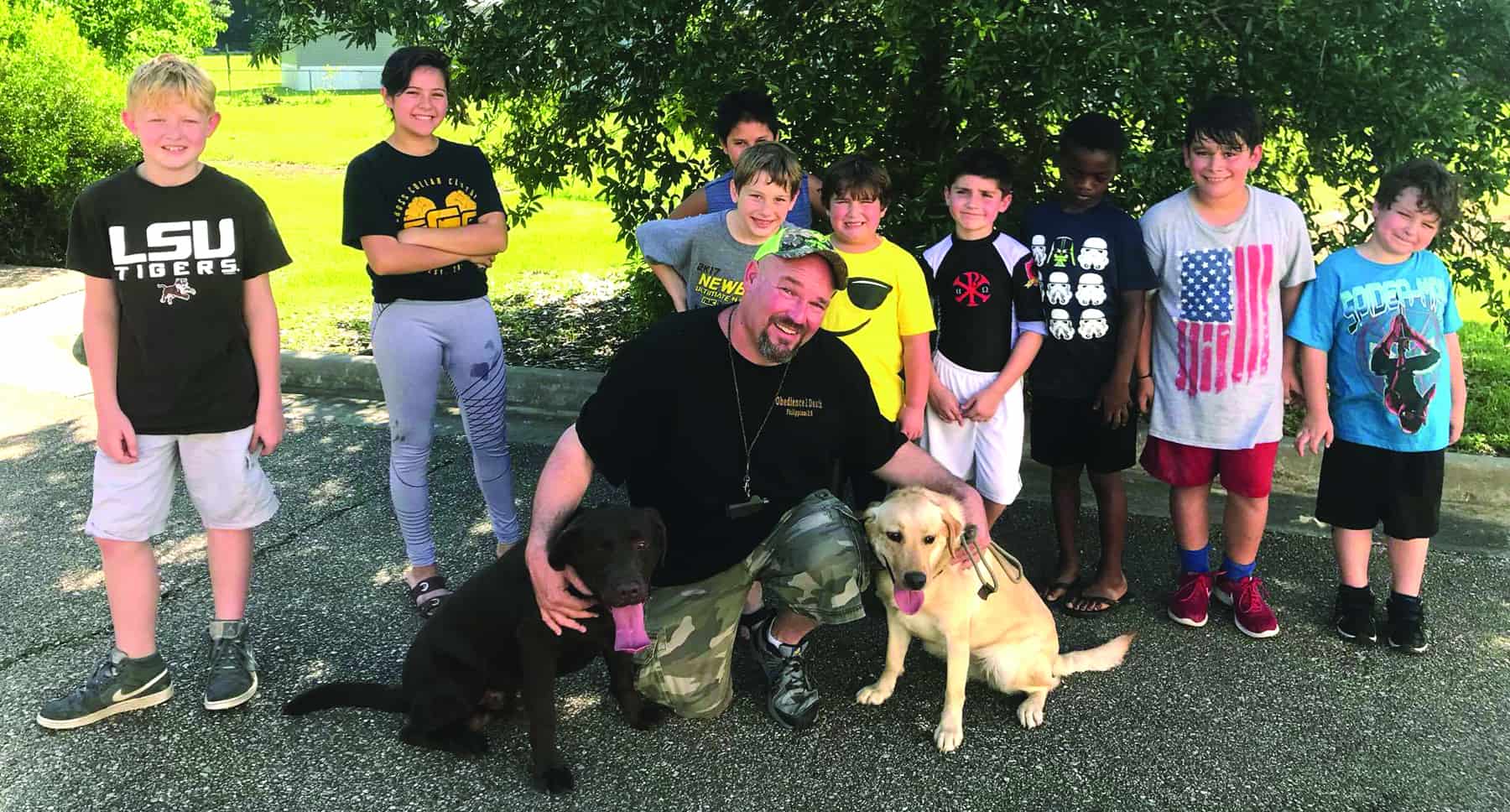 Zach , a 4-year-old chocolate Labrador retriever, and Trinity, an 18-month-old yellow Labrador, debut together at a Zachary day camp during late May. It is a three-year process to train a dog according to Morgan.

After that event, Morgan and Hough began the journey of becoming friends, and eventually Morgan became a presenter for Kingdom Dogs Ministry. By 2013, Morgan knew the Holy Spirit was leading him to start his own dog ministry, and through a group of generous friends, Morgan was able to buy his first dog, a chocolate Labrador retriever, for $21,000.

Morgan calls the dog “Glory,” a dual champion in land and water competitions, when giving commands. But the canine is officially registered under a different name.

“When I asked Hank what Glory’s registered name was, he told me, and I got real quiet. Glory’s registered name was Psalm 46:10. That’s my life verse. It was like God had ordained Glory to be my first dog in this ministry,” Morgan said explaining that Hough uses scripture to register his ministry dogs with the American Kennel Club. It is a practice Morgan has continued with the purchase of his two other dogs. Zach, a 4-year-old chocolate Labrador retriever, is registered as “Proverbs 3: 5-6.” Meanwhile, Morgan calls his 18-month-old yellow Labrador, Trinity, but registered the retriever as “2 Corinthians 13:14.”

“The curiosity about the dogs’ registered names has sparked conversations that have led to salvations,” Morgan said.

Morgan has traveled with his dogs from Oklahoma to Mississippi to Arkansas, visiting churches for youth events, men’s retreats and revivals, and, appearing at a number of schools under the umbrella of the Fellowship of Christian Students – sometimes with the entire school body present.

During the last five years, Morgan said, the Obedience 2 Death ministry has reached out to more than 120,000 people, with more than 13,000 people accepting Christ.

“The main purpose of this ministry is to advance the Gospel, and we use these dogs to do that — and God has blessed our ministry,” Morgan noted.

The presentations last about 40 minutes, and Morgan will incorporate whistle commands and hand signals to convey to the three dogs what he wants them to do.

During his presentations, Morgan will share his testimony, and tell how Matthew 6:24, how no man can serve two masters, related to him. He said there was a time in his life when he entered beagle dogs in competitions all over and it consumed his life.

“I was addicted to winning trophies. At least 30 Saturdays out of the year, I was chasing trophies. They were my idol. I knew God didn’t have all of my heart, soul and mind. That’s when I knew I wanted to surrender everything to Him,” Morgan recalled.

He sold the beagles and gave up hunting competitions completely at that time. Through his experience, Morgan says he can explain how obedience to the Lord can give a person complete freedom. As the “missionary dogs” listen to his voice to find a hidden stuffed sheep or go to fetch a “bumper” that Morgan has tossed, he communicates profound truths in the Word of God. The dogs demonstrate obedience in a variety of ways, much to the delight of those assembled.

“It is a three year process to train a dog, every day, seven days a week, rain, sleet or snow. But it’s relaxing to me, and each day I am having more and more life lessons from God,” Morgan said. “My heart is for people to come to the Lord and be discipled. I want to be obedient and go where the Lord leads.”

By Joe McKeever “‘…your ways are not my ways,’ saith the Lord.”  (Isaiah 55:8) Keep an eye on how the Lord works in your life. You might learn something useful for the next time He wants to use you. This little couplet seems to sum up 90 percent of what Scripture and life teach us concerning the operation … END_OF_DOCUMENT_TOKEN_TO_BE_REPLACED