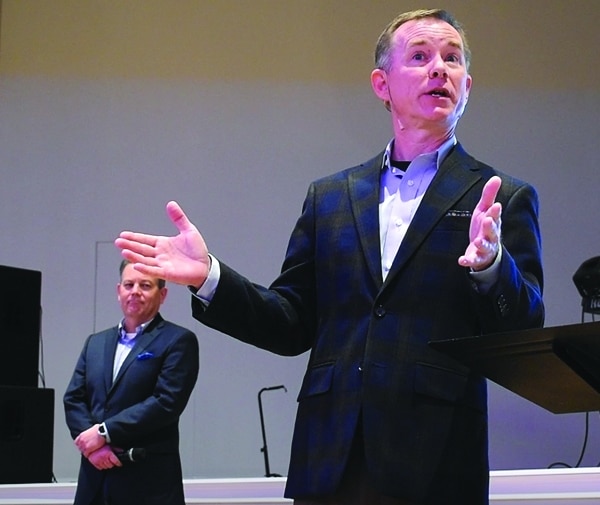 DEVILLE, La. (LBM) — ”The president of our Convention is an important job. The way to affect significant change in the Southern Baptist Convention starts by electing the president,” said Philip Robertson, March 16.

Robertson, pastor of Philadelphia Baptist Church, Deville, with a campus in Alexandria, made the statements as part of his promotion of the Conservative Baptist Network, of which he leads the Louisiana chapter, and in presenting Mike Stone, pastor of Emmanuel Baptist Church in Blackshear, Georgia, who is a candidate for president of the Southern Baptist Convention.

Stone was at PBC, Deville, as speaker for a luncheon that was open to area pastors and church members. It was one of three regional events he headlined in the state, March 15-16. He is the immediate past chairman of the SBC Executive Committee and chaired a task force for them that found Russell Moore and the Ethics and Religious Liberty Commission had negatively impacted the Cooperative Program (last year, in 15 state conventions that responded to a survey, a loss of $1.5 million to the International Mission Board and a drop of $4 million to state work).

The 10,000-member CBN seeks to halt a leftward drift in the SBC, according to CBN leaders.

Stone said he felt called by the Holy Spirit to seek to lead Southern Baptists out of the downward spiral – marked by dwindling numbers and increasingly progressive  ideology — that has cast a pall on the work of the denomination during the last decade or so.

Moreover, he outlined a three-pronged plan to help turn around the denomination from the ground up.

Noting that baptisms had dropped continuously in the last number of years to levels last seen in 1939 (when baptisms were on the way up), Stone said his top priority would be evangelism.

“You would expect somebody running for president of the SBC to talk about evangelism, but I want to propose a very specific plan,” Stone said. “If I am elected in June, I will immediately hit the ground running … with an evangelism strategy that we would begin implementing in the spring of 2022.” He said Southern Baptist would gather at the annual meeting in June 2022 to celebrate what the Holy Spirit did in the spring. Then a second round of simultaneous evangelistic events would be launched in the fall.

His second focus would be to establish the sufficiency of Scripture in how Southern Baptists respond to moral, political, and social issues.

“We have some troubling trends, philosophies, ideologies, and ‘analytical tools’ (a reference to the controversial Resolution 9, which approved of Critical Race Theory and Intersectionality, that was passed by messengers in Birmingham at the 2019 SBC Annual Meeting) that are making their way into the blood stream of Southern Baptist thought,” Stone said.

“I believe what Jesus taught in John 16:13 that ‘When He, the Spirit of truth, comes, He will guide you into all the truth,’” Stone emphasized.

Stone defined Critical Race Theory and Intersectionality (Marxist and atheistic ideas) in detail, lamenting that they are infiltrating SBC churches and seminaries. He said both these schools of thought basically assign guilt based on skin color, and both push the idea that the Bible should be interpreted through personal experience.

“Finally, I would seek to have an emphasis on greater involvement of grassroots Southern Baptists,” Stone said.

He would work through direct contact to get grassroots Southern Baptists engaged, he said, and appoint them “to serve on the Committee on Committees” with hopes of getting even more to serve as trustees on SBC boards.

By Rebecca Holloway PINEVILLE, La. – For years, I have read and heard the statement, “We need to hold life/our family/our possessions with an open hand.” The idea is that we are not in control of our lives or anything else on this planet. God is in complete control of all things and has the power and right to … END_OF_DOCUMENT_TOKEN_TO_BE_REPLACED