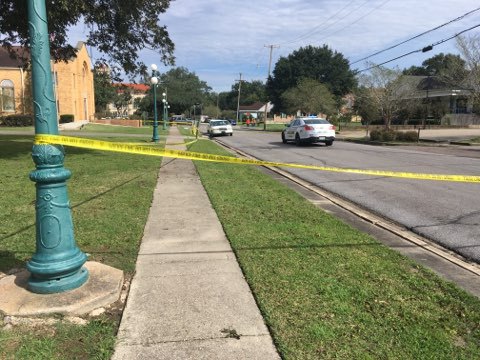 By Message Staff
CROWLEY – A man was left in serious condition after he was shot while attending a funeral at the First Baptist Church in Crowley Saturday, Nov. 10.
According to Cullen Clark, pastor of First Baptist Crowley, the incident took place ‪around 11 a.m.‬ outside the church, which was being used for a funeral for a son and his mother.
Pentecostal Bishop Aaron Wilson was leading the funeral of 26-year-old Brydon Gray and his mother when shots rang out, causing panic among the nearly 300 in attendance. Gray was fatally shot at his home in Crowley October 28, and his mother passed away from natural causes a few days later, according KATC TV.
Crowley police Chief Jimmy Broussard said a male victim was exiting the church during the procession when multiple shots were fired before the suspects fled the scene.
The male victim was taken to the hospital after being shot three times. He remains in serious condition. The shooters are still at large
In addition to the injuries to the victim at the funeral, multiple vehicles were hit with bullets, including one belonging to Wilson.
Clark told the Baptist Message his church will look for ways in the days ahead to minister to its community.
“We are not going to become insular but are committed to being a light to the community,” Clark said. “Our church is called to share Christ’s love especially during a time like this and we will remain committed to having our building as a place to minister.”
Rayne Today reported that Ronald Lathers Jr. of New Orleans was arrested in connection with the death of Gray. In addition to a charge of second-degree murder, Lathers is charged with two counts of attempted first-degree murder.
“It took a lot of courage because it was so noisy in there, but they were able to compose themselves as much as they could, but at the same time, they were terrified because they didn’t know if any of their children got hit because they didn’t know where the bullet went,” Wilson told KATC.

By Waylon Bailey Recently, I saw a tweet on Twitter that asked the question, “What would Jesus do in the midst of a worldwide pandemic?” No answer to the question was given, but the author obviously had an agenda and a suggested answer. The good news is that it led me to really ask, “What would Jesus … END_OF_DOCUMENT_TOKEN_TO_BE_REPLACED