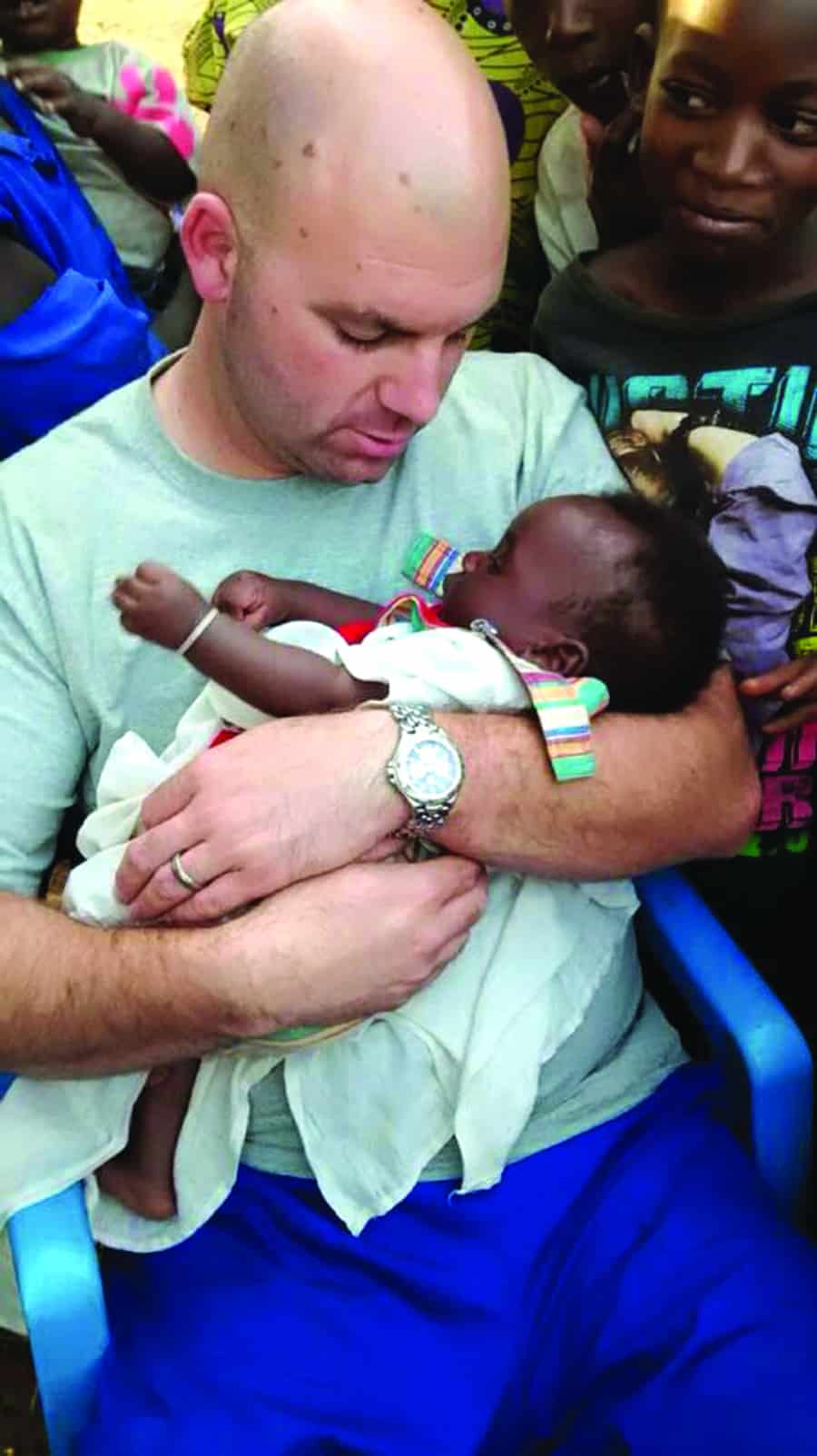 Belle River Pastor Ronnie Mabile, winner of the 2017 Exemplary Bi-vocational Pastor of the Year for the South region, holds a child in Uganda that fell ill. The child made a complete recovery and her mother joined a local village church in 2017.

PIERRE PART – When Ronnie Mabile stepped into the pulpit for his first Sunday as pastor, Belle River Baptist Church in Pierre Part was a bleak view of its once-thriving past.

Attendance had dwindled from 70 in the early 1990s, according to church records, to just 12 members the Sunday after Thanksgiving 2015, and, financial difficulties threatened the survival of the church.

Ignoring the advice of others to turn down the call by the depleted congregation, Mabile followed the Holy Spirit’s lead, reaping the Lord’s blessings when the church experienced a significant revival.

“God put on my heart to meet everyone who had once attended but fell off the books as the years passed,” said Mabile, winner of the 2017 Exemplary Bi-vocational Pastor of the Year for the South region as selected by the Louisiana Baptist pastoral leadership team. “For six months I visited and told them while I can’t do anything about the past, I wanted them to be part of the future. I wanted to show them the love of Christ and let them know the church is here for them. My vision was for us to be the heartbeat of the community and we became that in the coming months.”

A native of Pierre Part, Mabile spent many Sundays as a youngster at the church with his grandfather, Melvin Hebert. Christ’s love shown to Mabile at the church set the stage for his conversion and baptism at the age of 13.

As the years passed, Mabile prepared to eventually enter the mission field, but God changed his focus to ministry soon after his grandfather passed away in 2013. After preaching at the funeral, Mabile sensed the Holy Spirit calling him to serve at Belle River Baptist.

Initially dismissing the notion as pure emotion, Mabile continued working in his secular job at the Dow Chemical office in Hahnville.

Then the pastor of Belle River called Mabile to ask him to fill in during a planned absence.

After 18 months of preaching off and on, Mabile learned the pastor was moving to another church in Oklahoma. Moreover, the pastor asked Mabile to consider replacing him.

“My mouth hit the floor,” Mabile said. “I already knew the answer was ‘Yes,’ since my wife, Renee, and I had been talking between ourselves, even before the call, that this was what God wanted for us.”

Understanding the church could close within a few months if the finances were not stabilized, Mabile worked with church leaders to develop a plan of action. But before proceeding further, the congregation felt led to get their hearts right before God. So they committed to seven days of prayer and fasting at the start of 2016. Then they developed a vision for doing missions in their community.

Outreach efforts have included purchasing coats for the students at a nearby school the past two years, and partnering with the Louisiana Baptist Children’s Home to host speakers as a way to raise awareness about ministry opportunities in foster care and adoption. Additionally, the church hosted a community-wide “Eggstravaganza” before Easter, which included hunting for eggs, sharing the Gospel and handing out Bibles to all who attended.

The congregation also has signed up to participate in the Harvest, a statewide campaign that so far has enlisted nearly 900 of 1,650 Louisiana Baptist churches to “pray for every home and share Christ with every person” in Louisiana. State strategists spent 2016 to plan and enlist leaders and churches and in 2017 conducted statewide evangelism training and piloted different methods. Now, Louisiana Baptists are joining together across the state in 2018 for prayer events and intentional soul-winning activities.

The congregation plans to visit every family in the community within the next three years. The vision is bold, but Mabile believes his church is more than ready for the challenge.

“We will reach every home in this town,” Mabile said. “To me it’s all about reaching the people with the Gospel. We are working to tear down a lot of divisions along denominational lines by showing people the love of Christ.”

Through early June, the Sunday morning service averaged 80 worshipers, half who are in the 18-50 year old demographic. 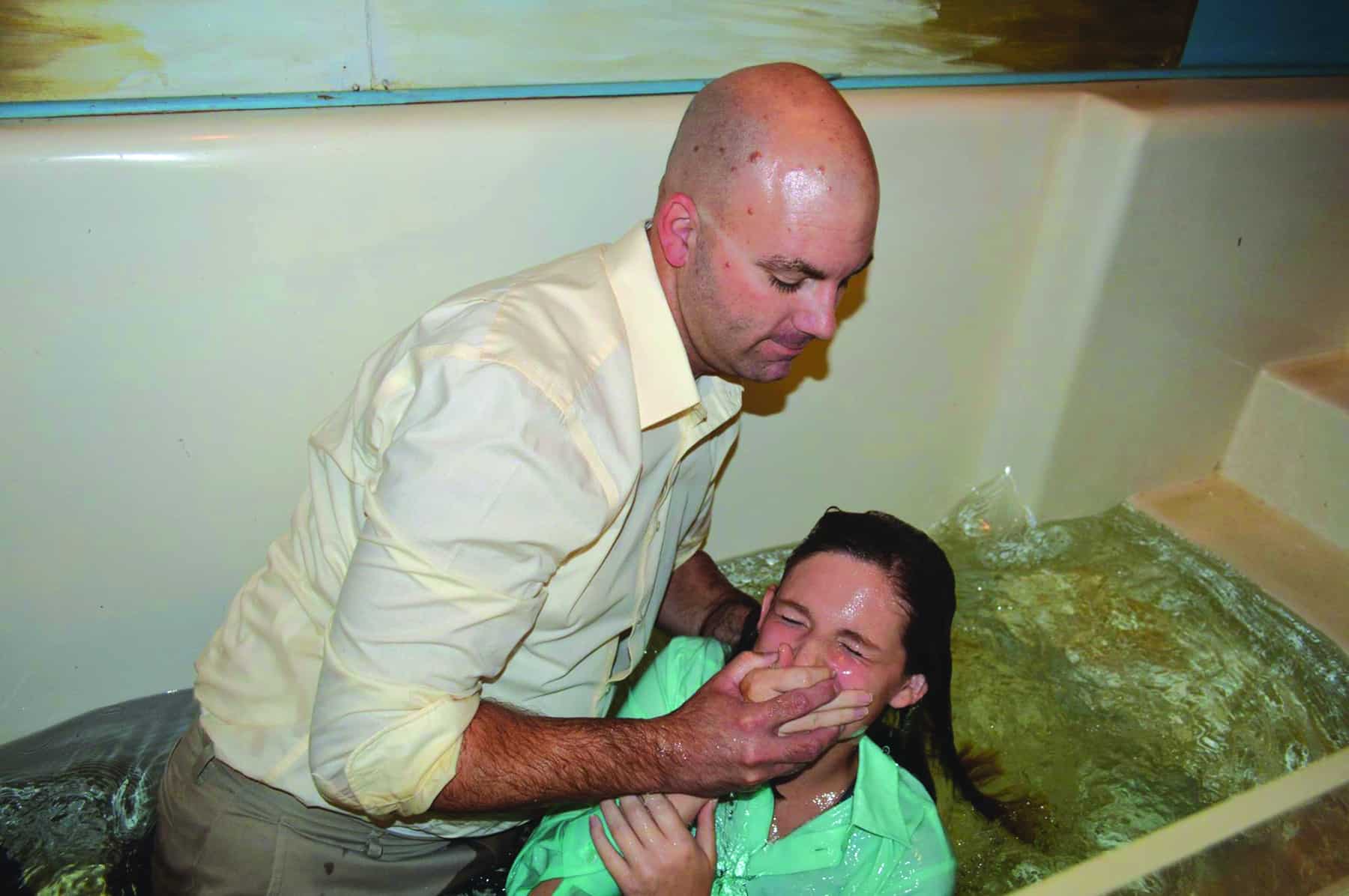 Ronnie Mabile baptizes Katelyn Seeks, one of 12 new converts baptized in 2017 at Belle River Baptist Church. Another four have participated in baptism through the first five months of 2018.

In 2017, 12 new converts were baptized, and another four have taken part in baptism during the first five months of 2018.

A passion for outreach and missions is what transformed Belle River Baptist from a nearly dead church to one very much alive, Mabile contends. He said the same model can be followed by other churches looking for ways to experience revitalization.

“At the end of the day, it’s a burden for reaching others with the Gospel,” Mabile said. “When your burden becomes outward and not inward, that’s when your church becomes healthy.

“Numbers are only one data point you need to look at when considering the health of your church,” he continued. “But if you are not growing, then something is wrong. You have to reach people with the Gospel and turn things around. When I was first there, the calendar was filled with inwardly focused events and now it’s packed with outwardly focused ministry. If you are in His will and doing what He has called you to do, He will help you do whatever is needed.”

As an emergency services specialist for Dow Chemical, Mabile’s time is at a premium and he is grateful for the support of his employer, wife and congregation in his service as a bi-vocational pastor.

However, his time in Louisiana is coming to an end due to his impending job transfer to Michigan.

Although his tenure at Belle River Baptist is ending in July, Mabile said he is open to serving as pastor of a church wherever he relocates.

“My prayer is I will build tents as long as I should build tents,” Mabile said. “I feel God has me serving bi-vocationally so I am not a burden financially to the church and able to make the tough decisions that I feel God puts on my heart for the future of the church. I know God arranged this to allow us to go forward as a church and family in His will.

“I would encourage people and pastors to really pray about church revitalization,” he continued. “It’s a gem.

“The people at Belle River Baptist Church have embraced us with love since we walked in,” he continued. “Though we no longer will be with them after July, we are excited about what God is doing here and we look forward to the road ahead.”

By Lane Corley Olive trees produce one of the most desired and sought after fruits around the world. The trees can live for thousands of years. The olive and the olive tree is spoke of in the Bible on numerous occasions. Including a few references to family life, like in Psalms 128:3 – “Your children will be … END_OF_DOCUMENT_TOKEN_TO_BE_REPLACED