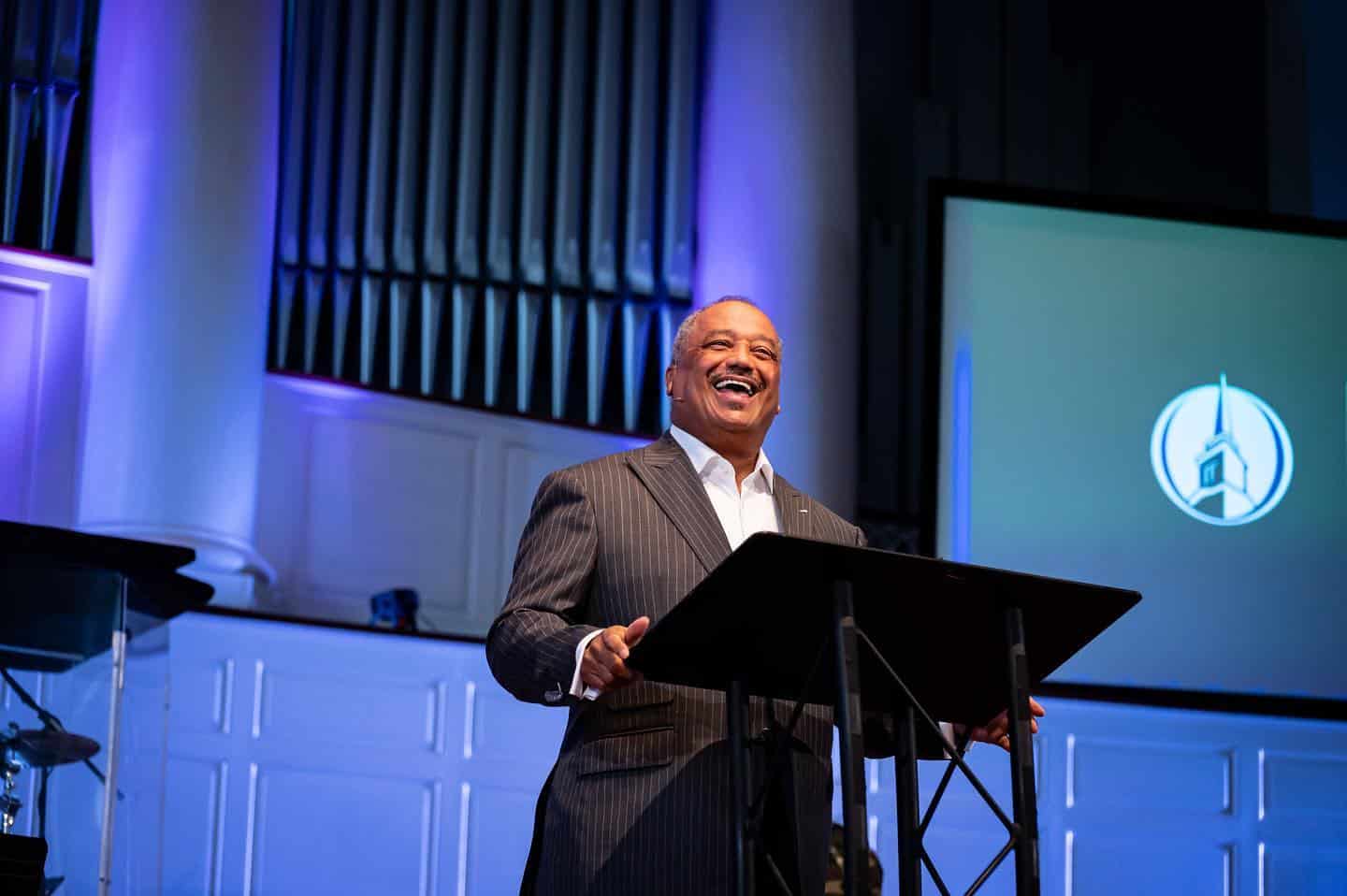 NEW ORLEANS (BP) – Fred Luter, pastor of Franklin Avenue Baptist Church in New Orleans, was honored by New Orleans Baptist Theological Seminary and Leavell College Tuesday (Oct. 12), with the announcement that a commemorative brick paver would be placed in his honor in the seminary’s Legacy Plaza reading “Fred Luter, the pastor of New Orleans.”

As he presented the award, NOBTS President Jamie Dew pointed to Luter’s wide influence and the impact he has made for God’s kingdom.

“[God’s] hand has been and is all over your life and your preaching and your ministry,” Dew said to Luter. “You are not just the pastor of Franklin Avenue, you are the pastor of New Orleans, and brother, we are grateful for you.”

The presentation coincides with Luter’s 35th anniversary as pastor of Franklin Avenue. The church will celebrate Luter’s anniversary Sunday (Oct. 17).

Dew noted that Luter began as a street preacher in New Orleans, then stepped into the role of pastor for a “very small” congregation. Today, that congregation numbers in the thousands with satellite campuses in Houston and Baton Rouge. Franklin Avenue is Luter’s only pastorate.

The chapel service marked Founders Day, held in October to commemorate that the seminary’s first classes were delayed a month due to the 1918 Spanish Influenza outbreak in the city. Commemorative brick pavers placed at Legacy Plaza, the courtyard at Leavell Chapel, honor friends and loved ones of NOBTS and Leavell College.

One of NOBTS’ most popular chapel speakers, Luter spoke to a full audience, drawing from Lamentations 3:22-23 to remind listeners of God’s faithfulness.

Noting that life is unpredictable, Luter quoted a phrase from the movie “Forest Gump” that compared life to a box of chocolates, meaning “you never know what you’re going to get.” The ups and downs of life, particularly during the COVID-19 pandemic, have affected everyone, regardless of station or position in life, Luter said.

“So, the question of the hour is … how have the trials and tribulations of this life affected you?” he said.

Jeremiah, the author of Lamentations, experienced the same discouragement and despair that many today feel, Luter said, admitting that today’s shifting culture and sinfulness can make it seem that life is “like a box of chocolates.”

Luter said because of God’s faithfulness, believers are not deleted, defeated or depleted.

“Mercy is God not giving us what we deserve,” Luter said. “No one is righteous. All of us should have been deleted. … However, because of God’s mercy, we are not deleted. We are not consumed.”

Believers are not defeated because God’s compassions never fail, even if it seems “the enemy” is winning, Luter said, adding that he was weary of COVID and weary of funerals. The virus has claimed 15 in his congregation. Yet, God’s compassion, mercy, grace, goodness, truth and faithfulness never fail, he said.

“The same God that raised Jesus from the tomb provides compassion for you and me,” Luter said. “Why? Because His compassions fail not.”

In closing, Luter said believers are not depleted because God’s mercies are new each day and cannot be “used up.”

By Lane Corley MADISONVILLE, La. - Three years ago, our family was going through one of those down seasons in the ups and downs of life. My mental focus and physical health was declining. I was discouraged and struggling mentally and emotionally. I knew I needed to change a few habits. As part of a recovery … END_OF_DOCUMENT_TOKEN_TO_BE_REPLACED