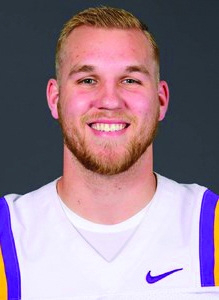 LSU long snapper Blake Ferguson is known as one of the spiritual leaders on the team. LSU sports photo

BATON ROUGE (LBM) —Blake Ferguson has had a remarkable history in football in a unique position.

He came to LSU as the number one long snapper as a senior in high school, and last year he was named the best collegiate long snapper in the nation.

On top of that, he took over that job for the Tigers from his brother Reid who was signed after graduation as the long snapper for the NFL’s Buffalo Bills, and, scouts are predicting Blake will play at that level on Sundays, too.

But Sundays have another special meaning for the professional football prospect.

He is a committed Christian, and his hometown congregation in Smyrna, Georgia, is Christ Covenant Church, a Georgia Baptist member.

Moreover, as much as Blake contributes to the success of the Tigers on the gridiron, observers say he makes an equally important impact off the field.

“He has been a part of the leadership team — going on his third year,” Stroup told the Baptist Message. “He is a tremendous man.

“When Blake walks into the room the energy goes up,” Stroup continued. “He has allowed us to speak life into him, and he has done likewise with other players.

Ferguson said that he tries to take that same energy for learning more about and sharing Christ with others into the locker room and onto the field.

“As an athlete, my faith has always had a huge impact on my approach to the game,” Ferguson wrote to the Baptist Message in response to a written interview. “At FCA, we talk all the time about ‘doing sports God’s way.’ This means that every snap we take, every time we run down the court, whatever it is, we represent Christ in the way that we play.”

His faith even penetrates his game day preparations.

“Each day before our team meeting, at the top of my notebook I write ‘Glorify God with your work today,’” he explained. “To me, this is a daily reminder to myself of the reason that I do what I do.”

Furthermore, there is a “culture of dependence on the Lord” on the team, Ferguson added, citing in particular Coach Ed Orgeron’s spiritual leadership.

“While he can get fired up on the sidelines and during practice, he also takes time to spend time with the Lord, and as a player that means a lot,” he shared. “He is in chapel every week and encourages players to be in there, also. And he leads the team in prayer following every practice and every game, showing our consistent dependence on the Lord to provide for us every single day.”

So far, the Tigers are 10-0 in a dream season, which includes a victory over the Alabama Crimson Tide and a first place ranking by the College Football Playoff Selection Committee.

But Ferguson puts these accomplishments and accolades in perspective: “I have an incredible platform as a collegiate athlete to share the Gospel of Jesus Christ with a large number of people whether it’s with my actions on the field or literally sharing the Gospel with them one on one.”

By David Jeremiah EL CAJON, Calif. (BP) - Something strange happens to the psyche of a nation in difficult times. The downtrodden begin to resent government and wealthy corporations and individuals, seeing them as out of touch with, if not the cause of, their plight. Desperation can lead to a reversal of … END_OF_DOCUMENT_TOKEN_TO_BE_REPLACED