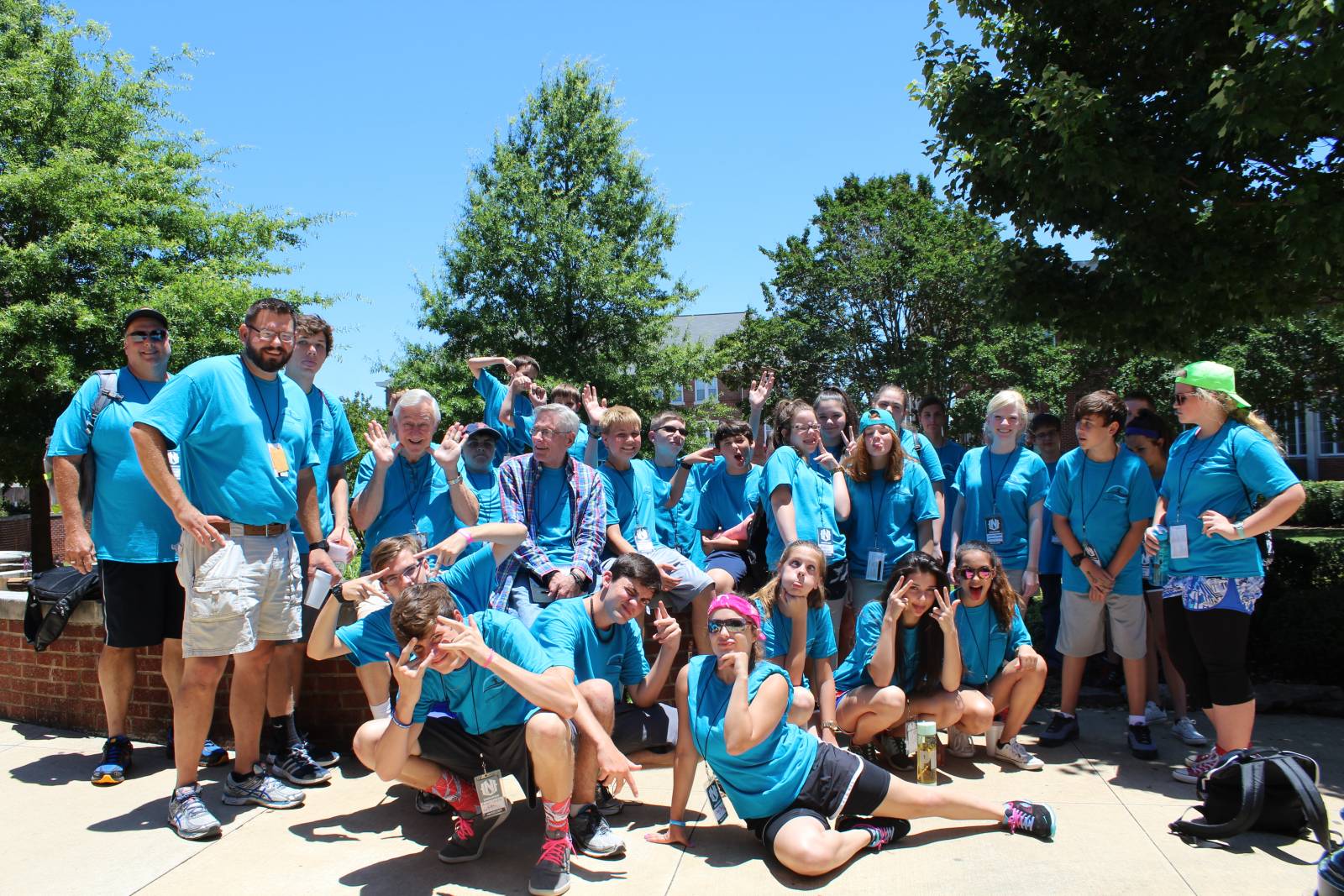 Group from Greenwell Springs Baptist Church in Louisiana strikes a funny pose during their visit to FUGE camp at Mississippi College in early June.

CLINTON, Miss. — One hundred kids from Louisiana’s Greenwell Springs Baptist Church were part of the first wave of FUGE campers building their faith at Mississippi College in early June.

Participating in lively worship services, playing fun games, and ministering to folks at Jackson area nursing homes were just a few of the life-changing projects visitors from the Bayou State experienced at the 2016 FUGE camp.

“The Holy Spirit was present here – you could feel it day and night,” Elisa Bankston said. She was among 20 parent chaperones from the church near Baton Rouge returning to the Baptist-affiliated University.

“The staff did a great job. This is a well-run camp.’’

For a few hours, June 8, students and parents from Greenwell Springs Baptist temporarily left the Clinton campus to share the love of Jesus Christ to the elderly at nursing homes and to encourage foster children. They also delivered the Good News to families at apartments in Mississippi’s capital city and did yard work in the hot sun and took on other tasks as a means to earn the opportunity to spread their message.

Coming to one of LifeWay’s Fuge camps for the second straight summer at MC will reap long-term results, said Andrew Stafford, the Louisiana church’s executive pastor. The FUGE camp, he said, “will spark revival in the hearts of the students and that will be taken back to our area.’’

Camp made a difference to 8th graders Hanah Santanen, 12, and her friend, Madison Simoneaux, 13, both of Greenwell Springs. The girls believe experiences at America’s second oldest Baptist college drew them closer to God. “I like the worship music,’’ Madison said Wednesday inside air conditioned Nelson Hall.

Although the school cafeteria did not offer spicy Cajun cuisine, specialties like crawfish or even a staple meal of red beans and rice, the Louisiana visitors embraced their five-day stay. Sleeping in residence halls, singing contemporary Christian music at worship in Swor Auditorium, and learning Bible lessons were among a marathon of activities they experienced.

Outside of Mississippi, Louisiana, Alabama and Arkansas send the most children from Baptist churches each year to MC camps, says Ken Gilliam, the Christian university’s continuing education director who oversees the popular programs.

In June and July, more than 6,000 youngsters from 15 states invade the 5,152-student MC campus for scores of church and sports camps.

With June temperatures climbing beyond 90-degrees, camp staffers worked hard to keep the 675 visitors cool. “We have crews on golf carts dropping off water coolers,” Gilliam said. “We’re making sure everyone is hydrated.”

“We are encouraging the students to embrace their faith,’’ says camp pastor Justin Orr of Baltimore, Maryland. “Camp is impactful. It’s not just Bible study,’’ says the staff member at McLean Bible Church in Washington. The FUGE summer camp benefits lost and saved students, Justin explained. “It’s neat to see them come to faith in Christ.’’

Church and sports camps are a wonderful way to bring prospective students to the Clinton campus. Some like former FUGE summer camper Mary Beth Hughes of Denham Springs (she began coming to MC as a third grader) return as MC students.

The 20-year-old Hughes serves in a leadership role as the Student Government Association’s chief justice at Mississippi College.

“I went to FUGE camps growing up and they were a big part in shaping my faith,’’ says Mary Beth, an MC sports media major and a member of First Baptist Church, Denham Springs. “I learned so much and was surrounded by amazing people who invested in me spiritually.

“FUGE even led me to Mississippi College where I go to school now. I’m so thankful for it,’’ she added.

By Waylon Bailey One of the most exciting stories in the life of Jesus occurred in his home town of Capernaum. As Jesus taught in what may have been the house of Simon Peter, four men carried their paralytic friend to the rooftop, tore the roof away, and lowered their friend right in front of Jesus. You … END_OF_DOCUMENT_TOKEN_TO_BE_REPLACED