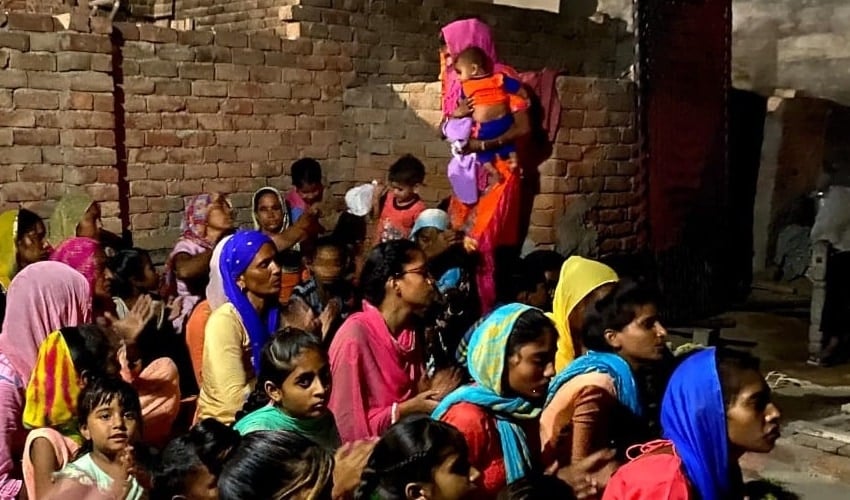 Organizers said friends, family members and neighbors gathered in small groups like this all over India May 29 to watch and listen to a Gospel appeal in word and song via the Internet and television airwaves.

ALEXANDRIA, La. (LBM) – Evangelist Sammy Tippit, president of the Conference of Southern Baptist Evangelists, trained 2 million Christians in May, primarily via WhatsApp, about how to share the Gospel with friends and family. As a result, millions more tuned in to a weekend evangelistic event broadcast on multiple media platforms in 11 languages, May 29-31. Moreover, organizers around the globe have reported one hundred thousand first-time professions of faith, so far, and they expect that tens of thousands more have been saved.

The special one-hour program included a message on Matthew 7:24-27 (The Wise and Foolish Builders) by Tippit, a digitally integrated choir of individuals singing remotely across the globe, music by Jennifer Turner, the wife of country music star Josh Turner, and testimonies by Jay Begbie, pastor of Bethsaida Baptist Church in Many, and Guy Wolcott, a businessman in Portland, Oregon.

“The responses that we have received from the broadcast have been wonderful,” Tippit told the Baptist Message. “There are so many hurting and needy people searching the Internet and looking for hope. We have the message that provides the only lasting hope.”

Tippit, who was saved at Istrouma Baptist Church in Baton Rouge and ordained at the First Baptist Church in Walker, is documenting huge numbers of those who joined the multiple broadcasts and who responded by seeking salvation in Christ. He said the reports are still being updated as groups check in, but that over that initial weekend there were 4.4 million views on social media and another 8 million viewers of the television broadcasts (primarily in the Urdu language). In all, he said, he has been able to confirm that the program reached individuals in 68 countries.

The following weekend another 1.5 million viewers watched repeat broadcasts in five languages, and in just the Hindi language, there were 850,000 views. “Two hundred thousand devices played the service from beginning to end,” Tippit said of Nepal, explaining that most of these likely were families or small groups of friends. “So, it’s possible that 400,000 to 600,000 of just Nepalis watched the program all the way through!”

His Iranian contacts estimate they have logged in the neighborhood of 100,000 salvation decisions, so far, he said. Meanwhile, as volunteers continue to gather more numbers, he is getting inundated by the testimonials that have been shared.

“Iran may have people with the greatest hunger for the Gospel anywhere in the world,” he exclaimed.

Tippit described an update he received about how two nurses in Dehrandun, India, a city of nearly 580,000 people, were working among coronavirus patients “and were very scared about contracting the disease.”

“They were always filled with fear,” the note said. “But the message on Friday touched them very much and they committed their lives to Jesus. The moment they did, they said their fears vanished.”

Another young lady, Simran, was contemplating suicide due to loneliness and depression in the densely populated city of Amritsar (population: 1.13 million) in northwestern India. She had stopped going to work because the lack of peace and joy in her heart left her physically and emotionally weak, according to a summary Tippit received.

“She came across the live stream of the event in time to hear the story of the prisoner who later became a pastor,” he was informed. “It gave her hope and she surrendered her life to Jesus. She is now back at work, saying she ‘has found the rock to stand on.'”

Finally, a young man hailing from India but living in Canada gave his life to Jesus, another report noted. Sumit’s mother has been praying for him because he had begun to question the existence of God and was dabbling in New Age philosophy: “A text from his mother said he was listening to the message on Friday and it spoke so much to his heart that he gave his life to Jesus.”

Now the vast network in Tippit’s evangelistic sphere is at work in an effort to first connect the saved with (1) a person, (2) a small group and (3) a local congregation to start the discipleship process.

“We have 21 videos to help these three points of contact to train new believers,” Tippit said.

Many of the evangelism counselors he trained in May have been in this discipleship program for 6 months, already. He said they will come alongside these new believers and help them understand what it means to live for Christ.

Tippit said he was amazed how God has used every facet of this initiative to draw people to Him.

“One girl had attempted to share Christ with her sister but to no avail,” he said. “However, after the first day of training, she prayed for her sister, who then gave her heart to Christ the next day. Her story was multiplied thousands of times. There are places around the world where the harvest is ripe.”

Meanwhile, Tippit said he was praying fervently about Southern Baptists’ declining baptism numbers, an indicator of flagging evangelistic zeal that starts at the top of the Convention. “It would be something if we could do this in the SBC.”

By Chuck Kelley Rhonda and I met on our first Sunday at Baylor University. We began dating during that freshman year, became an exclusive couple our sophomore year, publicly committed to a serious relationship in our junior year, became engaged in our senior year, and were married in June after graduation. We … END_OF_DOCUMENT_TOKEN_TO_BE_REPLACED