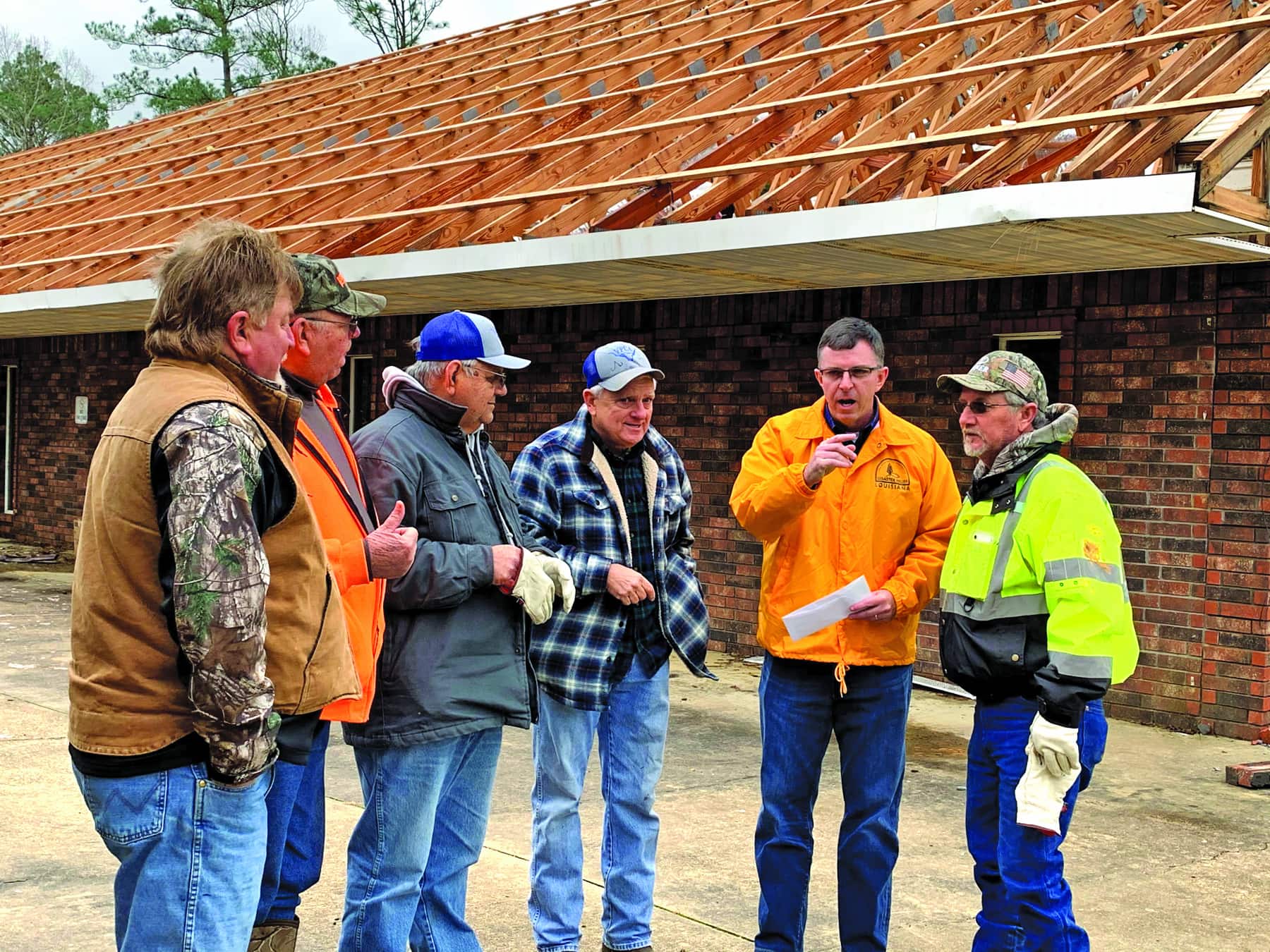 Louisiana Baptist Convention Executive Director Steve Horn (in the yellow Disaster Relief jacket) presented a check to James Johnson, Gravel Hill Baptist Church worship leader, and laymen from the congregation. The funds were provided as assistance for the ministry as it recovers from a Dec. 16 tornado. Johnson was filling in for Pastor Anthony Eaves who could not attend.

ALEXANDRIA, La. (LBM) – The storm has passed and now the cleanup begins.

And Louisiana Baptists are ready and willing to help.

“We were in Pitkin yesterday (Dec. 17) helping Gravel Hill Baptist Church and Marlow Baptist Church but today (Dec. 18) we are in Pineville going door to door seeing if there is anything we can do to help the homeowners,” Gibbie McMillan, Louisiana Baptists Disaster Relief strategist told the Baptist Message. “If they are not home, we are leaving a note with our phone number.

“We’ve got a few jobs … enough for today … but there are a lot of people who have sustained damage,” he continued. “Some have insurance and may want to wait for their adjustor or use a tree company, and that’s fine. But if they don’t have anyone, we can help.”

McMillan asks that anyone needing assistance with downed trees or needing a tarp to cover roof damage can call 318.321.9738.

“I literally just got here today so I missed the crews before they left for their jobs,” said Cheatwood. “We’ve got two crews here and a third is due tomorrow. We have boots on the ground, about 20 or so, now we just need places for them to help and minister.”

Cheatwood explained that homeowners need only call 318.321.9738 and leave their name, physical address and a return phone number. He will dispatch assessors who will meet with the homeowners and explain what the crews will do.

“Our role is to minister to them spiritually and to help them to safely get back into their homes by removing any debris or dangers from downed trees or limbs. We also will put a tarp on the roof to protect their house from rain.”

The homeowners must sign a waiver of liability before any work can begin.

“The hardest hit areas appear to be in Pitkin, Rosepine and Alexandria,” said Cheatwood. “There is a lot of work to do.” 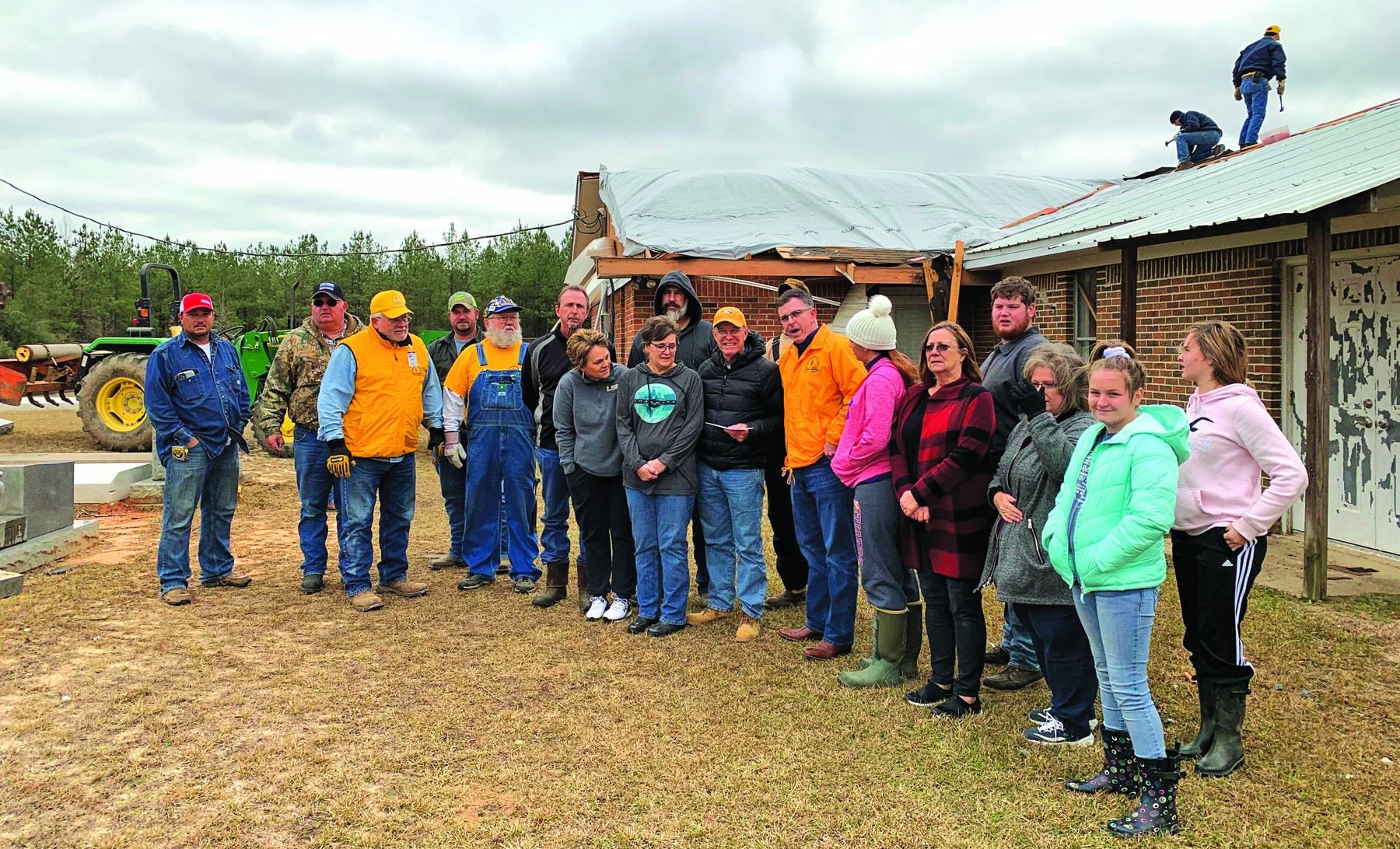 Louisiana Baptist Executive Director Steve Horn (in the yellow Disaster Relief jacket) presents Marlow Baptist Church Interim Pastor Tim Patrick (right) and members of the church with a check to assist in Marlow’s recovery efforts from a December 16 tornado. Marlow lost all of its outbuildings, the roof on its Fellowship Hall and had extensive damage to its cemetery.

According to the National Weather Service in Lake Charles, the tornado traveled an estimated 63 miles … from DeRidder to Alexandria. The NWS said the tornado was at its strongest as it crossed into Vernon Parish, weakened and then re-strengthened as it moved into West Alexandria as an EF-3 tornado.

It was in Alexandria the tornado was at its strongest when it destroyed everything on Ross Lane with a maximum wind speed of 158 miles per hour. It maintained its strength as it crossed Highway 28, destroying Johnny Downs Youth Complex, a Chevron gas station where three employees and three customers sought shelter in the store’s cooler, and a non-denominational church.

It weakened to an EF-2 as it moved into the Grundy Cooper and Cloverdale subdivisions destroying two mobile home dealerships, a Coca Cola plant, and numerous businesses and homes in its path. Cloverdale Baptist Church was in the storm’s path and lost its steeple and had extensive water damage in its education building.

Louisiana Baptists Executive Director Steve Horn presented a check to Pastor Dennis Snoddy and members of the church from the Louisiana Baptist Convention to help with expenses. Horn also presented checks to Gravel Hill’s Worship Leader James Johnson and other laymen from the church. Pastor Anthony Eaves could not be at the presentation as he is a judge and was holding court.

Marlow Baptist’s Tim Patrick and members of the church were on hand to receive a check from Horn.

The NWS said the tornado weakened to an EF-1 as it crossed the Red River, past Buhlow Lake before ripping the press box off Pineville’s D.C. ‘Bill” Bates football stadium. It continued to Donahue Ferry Road, Edgewood Drive, Myrtlewood Drive and Fairview Lane littering those areas with fallen trees, limbs and downed power lines.

The tornado finally dissipated just east of Edgewood Drive.  It was the second time in 14 months Edgewood Drive had been impacted by a tornado.

Anyone needing help with removal of trees or a tarp for their roofs should call 318.321.9738. Leave your name, physical address, and a return phone number. An assessor will be assigned.

By John Hebert, Louisiana Baptist missions and ministry team leader ALEXANDRIA, LA. (LBM)--Do you know what Winston Churchill, Bill Gates, Walt Disney, and Colonel Sanders have in common? It has nothing to do with their fame or notoriety, I would suggest. Instead, it is the trait that I contend was the cause of … END_OF_DOCUMENT_TOKEN_TO_BE_REPLACED