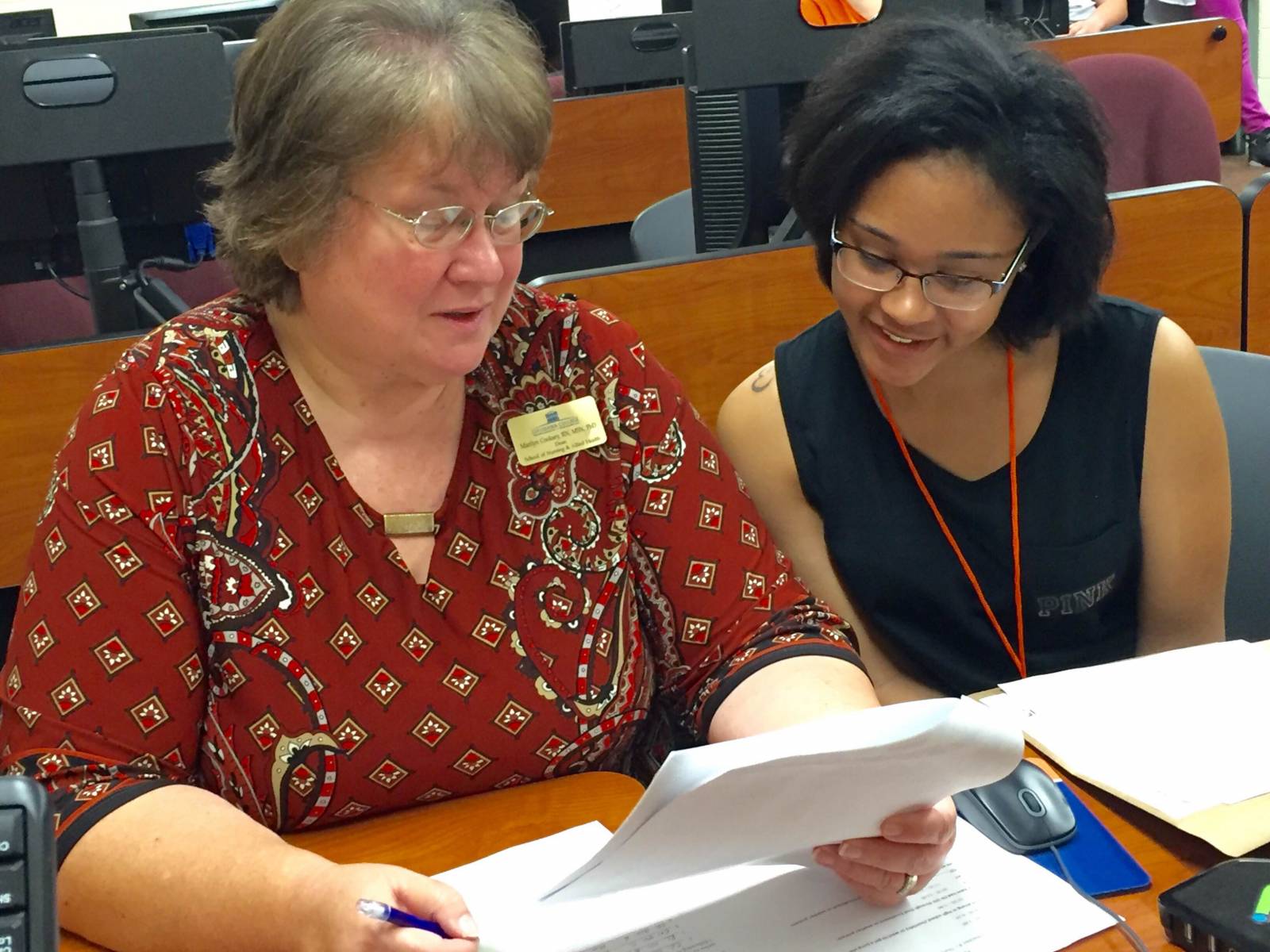 Dr. Marilyn Cooksey - dean and professor at the LC School of Nursing - advises Brittany Milo (right) of Alexandria as she pre-registers for fall 2016 classes at Louisiana College.

“The response is beyond encouraging,” said Dr. Brandon Bannon, vice president for Enrollment Management. “We had nearly twice as many students pre-register today as we did at last year’s event. The caliber and the character of these young people will boost LC in all the right ways.”

The number of those pre-registering for the fall 2016 semester caused college officials to add classes.

“We have three biology labs and three anatomy labs completely full,” said Dr. Wade Warren, professor of biology. “I can’t remember the last time that happened, if ever.”

Warren said, “The word is getting out about the positive things happening at LC, and these students made the right decision to enroll with us.”

Madison Schultz, a Nursing major from Houston, Texas, said, “Louisiana College was not my first choice, but I believe God has led me here. It feels like home.”

Pineville resident Joshua Spurgeon came to LC “because of the Christian environment and the reputation for excellence Dr. Warren has. I also wanted to be close to home.” Spurgeon is a pre-pharmacy major, whose brother Nick is an LC alum.

“I’ve always been drawn to science,” said chemistry major Brianna Woodley, a homeschool graduate from Bossier City. “I want to learn in a faith-based environment.”

Business major Micah Major from Denham Springs said playing on LC’s golf team attracted him. “Louisiana College gets me one step closer to my career goals.”

Undecided on their majors, twins Abigail and Gabriel Braley from Buckeye High School said they wanted to start training for their careers in a “Christian atmosphere.”

Louisiana College President Rick Brewer addressed the incoming students and their parents, saying a college education is more than a degree or a job. “We are preparing students to think Christianly, and to have the skill set and ability to do critical thinking, analytical reasoning, and problem solving that can take you anywhere in life – anywhere God is calling you.”

In a later interview, Brewer told LCNews: “This incoming class of 2020 is not one that is waiting for their stellar achievements; many of these students already have distinguished themselves with remarkable ACT scores and their commendable choice of majors. Today they are exemplars of those who have the traits to succeed in our relevant, relational and rigorous environment. We thank God for them, and we will be stewards of their time and efforts as we prepare them to become graduates who will transform the lives of others in the marketplaces of the world.”

By David Jeremiah EL CAJON, Calif. (BP) - Something strange happens to the psyche of a nation in difficult times. The downtrodden begin to resent government and wealthy corporations and individuals, seeing them as out of touch with, if not the cause of, their plight. Desperation can lead to a reversal of … END_OF_DOCUMENT_TOKEN_TO_BE_REPLACED