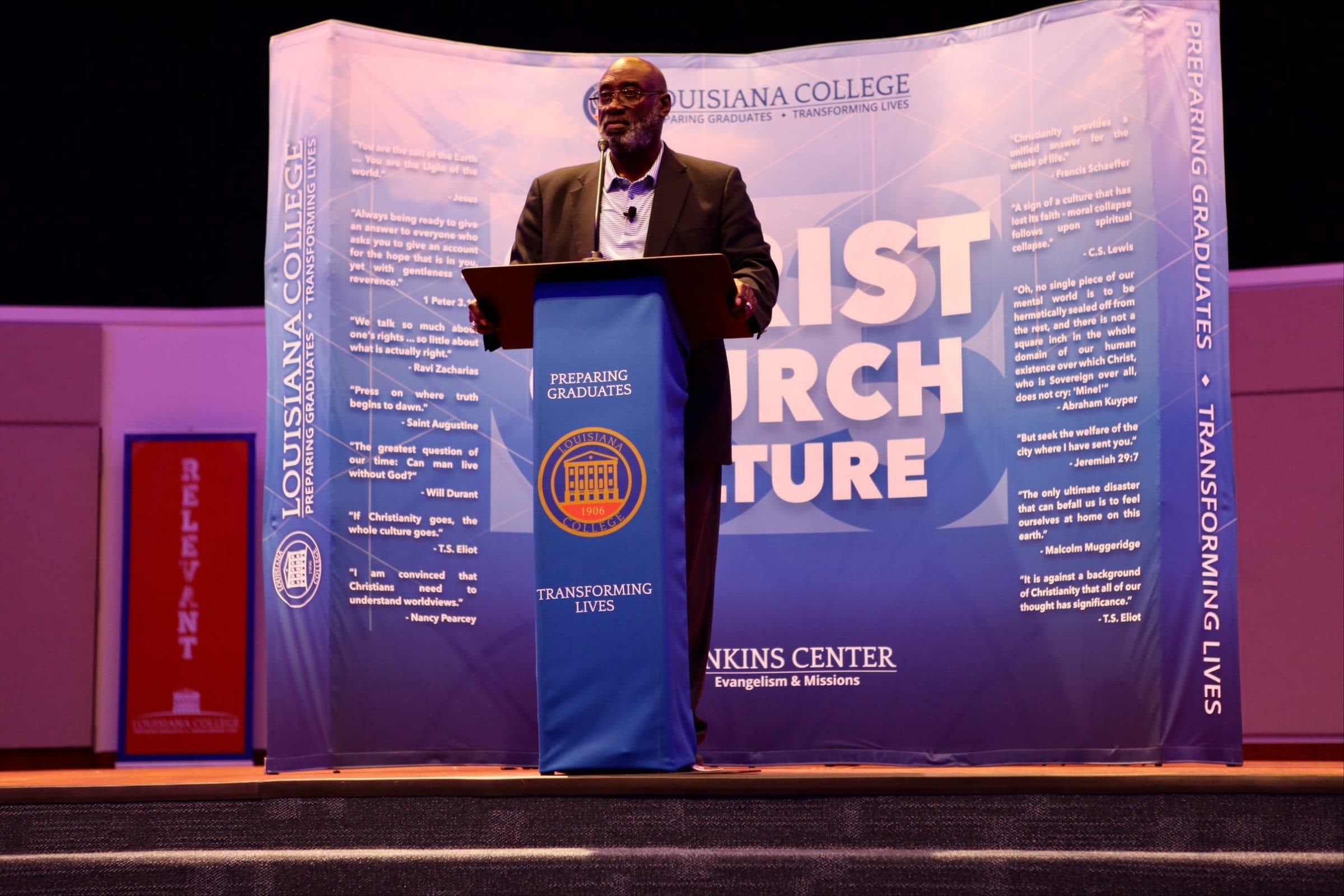 PINEVILLE, La. (LCNews) – “CRT bears witness to the reality of whether or not you believe the Bible is true,” Dale Clayton said, Sept. 20, as the keynote speaker for Louisiana College’s annual Christ Church Culture Conference.

Critical Race Theory is an academic and social movement based on claims that U.S. law and institutions are inherently racist and function to create and maintain social, economic and political inequalities between whites (oppressors) and minorities, in particular blacks, (oppressed).

“If you buy into this, you are buying into destruction of the United States,” Clayton observed.

LC President Rick Brewer told the crowd that CRT is surging among diversity training programs and public policy positions by governments, corporations and educational systems of all levels nationwide.

“Equity. Social justice. Inclusion. These are CRT buzz words,” Brewer said. “Equity sounds non-threatening as opposed to neo-Marxism. But this will be the end of federalism and of free speech in America.”

Clayton said the biggest problem with CRT is its lack of room for Christ in the equation.

“Jesus has no place in the resolution of the problem,” he said. “If you’re white, you’ll always be white, so you can’t not be racist. If you believe that you’re dumber than dirt.

“[CRT is] saying the Gospel has no power to change you,” Clayton emphasized. “CRT has no place for the Gospel.”

Critical Race Theory writes white people completely out of the conversation, Clayton said. The only opinions or solutions that matter are those of minorities. Whites have no opinion of value to right any wrongs or perceived wrongs.

“It’s just wrong,” Clayton said. “It’s just as wrong as what whites did to blacks.”

The directness of Clayton appealed to Jakauri Lovelace, an African American and a junior finance and economics major from Shreveport.

“He made good points on being educated on what you’re going to put out there,” Lovelace said. “I didn’t know much about [CRT.]”

Zane Blanchard, an Anglo and a junior English major from Belle Rose, was surprised and excited about how bluntly Clayton spoke and was especially glad that Clayton underscored “the sufficiency of the Gospel” for dealing with racial conflicts.

Clayton argued that the very real civil rights progress that has been made over the decades will be undone by the CRT movement if Christians do not stand up and fight this.

“Jesus is the only answer to racism,” Clayton said. “And the only reason it still exists is people who don’t know Him.”

Based on reporting by Sierra Boudreaux and Victoria Watson of Wildcats Media.

By Lane Corley MADISONVILLE, La. - Three years ago, our family was going through one of those down seasons in the ups and downs of life. My mental focus and physical health was declining. I was discouraged and struggling mentally and emotionally. I knew I needed to change a few habits. As part of a recovery … END_OF_DOCUMENT_TOKEN_TO_BE_REPLACED