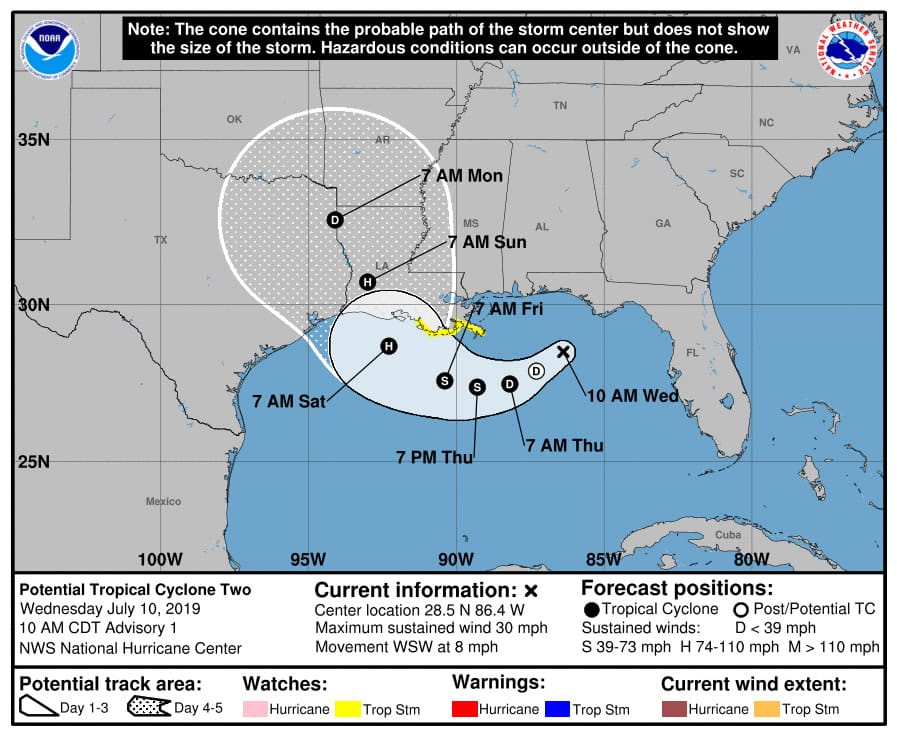 A tropical cyclone is expected to form by Thursday over the northern Gulf of Mexico. National Hurricane Center photo

BATON ROUGE, La. (LBM) — Louisiana Gov. John Bel Edwards announced today, July 10, that he will declare a state of emergency ahead of a storm that may significantly impact the state.

A broad area of low pressure may become a tropical depression later today or Thursday and could make landfall in the state Friday or Saturday.

“Obviously we are not sure yet of the exact track of the storm or the strength of the potential tropical system once it makes landfall,” Edwards said during a press conference Wednesday morning. “However, we are confident that there will be widespread heavy rainfall and coastal flooding. We also know that the Gulf of Mexico, because it is so warm, that the longer the storm system lingers over the Gulf, the more organized and the stronger it is likely to become before it makes landfall.”

Edwards said the storm could bring 10 to 15 inches of rainfall and that the storm will be slow moving. He said the Mississippi River levels in New Orleans could reach 20 feet, rising above the flood protection in Plaquemines Parish.

“Right now we believe that any overtopping of the levees will be of a relatively short duration of about 12 hours,” he said. “But that is still a very, very significant hazard, so we are asking everyone to take this very seriously.”

Edwards said the National Guard will move high water vehicles to areas that may need resources and will set up command posts.

Earlier in the day heavy rainfall caused flooding in New Orleans, resulting in a temporary shutdown of ferry services and the Riverfront Streetcar service, and, also knocked out power to more than 20,000 homes and businesses in the New Orleans area, WWL-TV reported. Several waterspouts were reported in the city, including one near the University of New Orleans campus in the Gentilly area.

By Waylon Bailey Recently, I saw a tweet on Twitter that asked the question, “What would Jesus do in the midst of a worldwide pandemic?” No answer to the question was given, but the author obviously had an agenda and a suggested answer. The good news is that it led me to really ask, “What would Jesus … END_OF_DOCUMENT_TOKEN_TO_BE_REPLACED