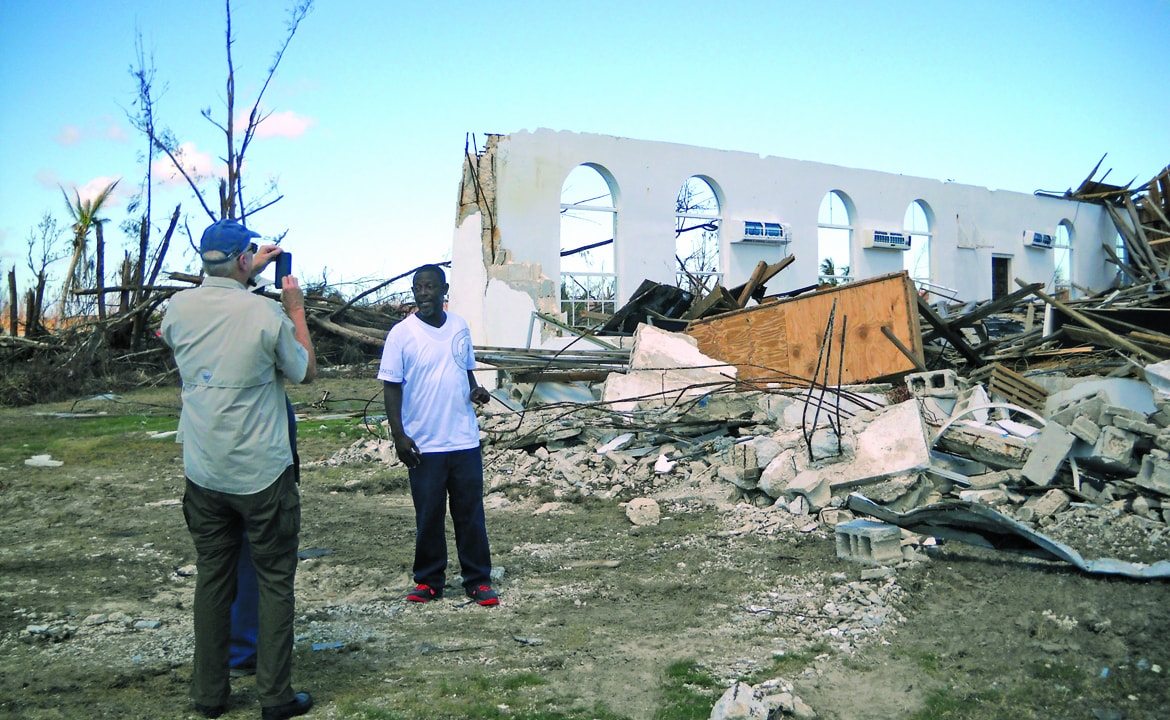 The 128-year-old New St. Matthew Baptist Church in Freeport in the Grand Bahamas was a total loss following the passage of Hurricane Dorian on Sept. 2. The storm had sustained winds of 185-miles-per-hour. Tom Waites photo

ALEXANDRIA, La. (LBM) — Louisiana has withstood its share of devastating hurricanes but the destruction left by Hurricane Dorian to the Commonwealth of The Bahamas is hard to process, according a leading authority on disaster relief.

“They have no electricity, no running water, no shelter, no trees on some parts of the island,” said John Hebert, missions and ministry team leader for Louisiana Baptists. “There are stories of rescuers on Sea-Doos riding 30-foot waves and going over raised bridges.

“I just can’t fathom how people were able to survive a storm of that magnitude,” he continued. “God just laid on my heart the need for us, as a state, to come to the aid of these people. It is going to take a herculean effort to help get these people back up on their feet.”

In the coming weeks Hebert wants to introduce Louisiana Baptists to a project called ‘Bahama Rebuild’ which will help restore the spiritual community on the island nation.

“The churches are the center of the Bahamian culture and the majority of them were severely damaged or destroyed,” said Hebert. “We have pastors without churches and churches without congregations. I am currently trying to enlist the support of our churches to pay one pastors’ salary for the next six months. We are in prayer that a couple or several of our churches will help out.

“We are partnering with Southern Baptist Disaster Relief, IMB and Baptist Global Response,” Hebert explained. “In two weeks Gibbie McMillan [men’s ministry and disaster relief strategist for Louisiana Baptists] and I will be traveling with other SBC DR leaders to the Bahamas to assess the needs and begin mobilizing our efforts.”

Typically, when people think about the Bahamas, the image that comes to mind is an exotic destination, Hebert told the Baptist Message. But the storm destruction has made the island a primitive place with respect to infrastructure.

Hebert stressed that the job of rebuilding will not be easy.

“Logistically it is a nightmare because supplies, equipment and volunteers have to go to Fort Lauderdale [Florida] to make connections to Freeport through Nassau. Freeport is only 65 miles from the Florida coast but all commercial air traffic is routed through Nassau because of damage to the air flight control systems. Once we land in Freeport, we have another 8 to 10 miles to go to get to the sites we will be working.

“We are going to have to bring our own generators, lights, and an air-conditioned tent to house our volunteers. We are in the process of putting together a material list,” said Hebert. “We are searching for a site coordinator for each of the sites and volunteers who would work a week at a time.”

One of those sites will be the 128-year-old New St. Matthew Baptist Church, one of nine of the 13 Baptist churches on the islands that were either damaged or destroyed by the storm.

“It was a total loss,” said Hebert. “So, Mississippi and Louisiana have adopted St. Matthew as our rebuild. North Carolina and Alabama have adopted two other Baptist churches close by. Together the four states are going to work to get these churches back up and running.

The timing for the work could not be better according to Hebert.

“The late fall and winter months are the mildest and most pleasant temperatures in the Bahamas,” continued Hebert. “The storm season virtually will be over by Nov. 1, and we have a window of calm and mild temperatures to get the church rebuilt so partnerships can develop to help churches connect for further community rebuild opportunities.”

By John Hebert, Louisiana Baptist missions and ministry team leader ALEXANDRIA, LA. (LBM)--Do you know what Winston Churchill, Bill Gates, Walt Disney, and Colonel Sanders have in common? It has nothing to do with their fame or notoriety, I would suggest. Instead, it is the trait that I contend was the cause of … END_OF_DOCUMENT_TOKEN_TO_BE_REPLACED