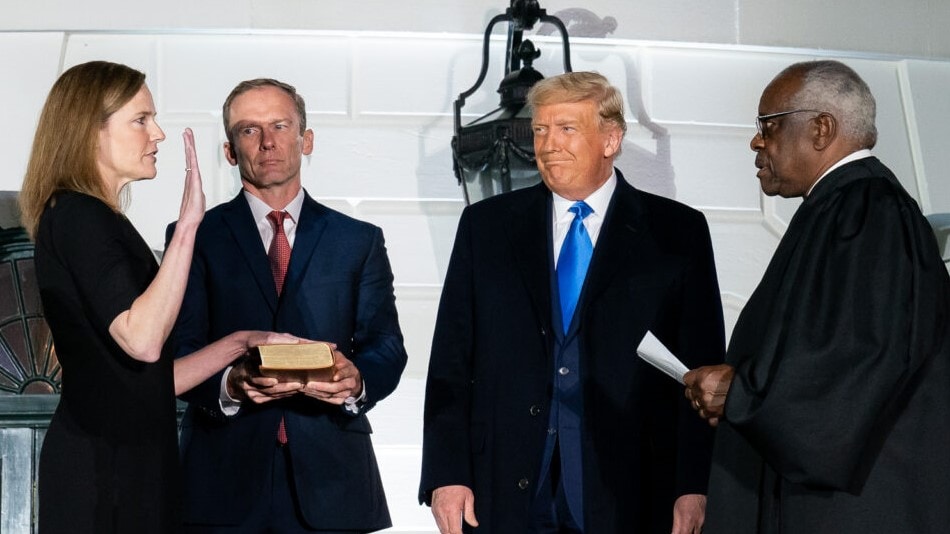 WASHINGTON, D.C. (LBM) – The U.S. Senate’s confirmation of Amy Coney Barrett to the Supreme Court drew high praise from Louisiana’s congressional delegation as someone who is dedicated to her faith and the Constitution.

Aside from the bench, Barrett is married to her husband, Jesse. They have seven children, including two who are adopted from Haiti and another who has Down syndrome.

Congressman Mike Johnson, a member of First Baptist Church, Bossier City, said in a statement he was filled with joy that a personal friend is now a Supreme Court justice. Johnson said he first met Barrett at a student leadership workshop more than 30 years ago and knew then that she was destined to reach the highest levels of influence and achievement.

“As everyone now knows, she has all the qualities that America needs and deserves in a Supreme Court justice,” Johnson said. “She will serve with honor and distinction, and she will build an extraordinary legacy. As I reminded her in a text this weekend, while God has used her to uplift and inspire an entire nation– no one is more proud of her than the good people of her home state.”

“I’m excited that we have a good Christian conservative on the Supreme Court,” Abraham told the Baptist Message. “Amy Coney Barrett will fortify what I believe the way Court should rule in the future on conservative Christian issues.”

Sen. John Kennedy, a member of the committee that approved the advancement of her nomination Oct. 22, said Louisianans should be proud the Senate confirmed a Supreme Court justice who “will interpret the law as written instead of inventing policy from whole cloth.

“Democrats are determined to advance their agenda by appointing politicians to the bench, judges who are happy to rewrite social and economic policy every other Thursday,” Kennedy said in a statement. “Judge Amy Coney Barrett rejects that model as unconstitutional. Democrats have therefore rejected her. Americans, though, are welcoming Judge Barrett as a justice who will serve the entire United States by upholding our Constitution.”

Louisiana’s other senator, Bill Cassidy, noted in remarks from the Senate chambers on Oct. 24 that in addition to her qualifications to serve as a Supreme Court justice, he admired the grace shown by Barrett as she and her family members endured attacks from Democrats and others opposed to her.

“She has repeatedly been attacked for being a practicing Catholic,” he said. “She has every right to live her faith. No one in public service should be expected to cast aside deeply held religious convictions to satisfy an angry mob fabricating reasons to say “no.” Thank you, Judge Barrett, for defending your – and by extension all of our – religious liberty.

“Her political enemies and some in the press intentionally mischaracterized many of her statements and twisted them in new ways to attack her,” he continued. “Again, fabricating reasons to vote no.

“Perhaps the lowest blow in this process, however, was the attack on her children,” Cassidy emphasized. “It’s a low, low blow to bring a mother’s children into question.

“Yet, Judge Barrett handled each of these attacks with grace and dignity,” he said. “During her hearings, she displayed time and again that she has the skills, the demeanor and the experience to serve on the Supreme Court.”

Congressman Steve Scalise, Louisiana’s most senior member of the House, noted in a statement that Barrett showed grace amid attacks on her faith.

“This confirmation marks another significant achievement for President Trump, who has repeatedly delivered on his promise to appoint conservative judges who will interpret laws according to the Constitution as it is written, rather than judges who carry out their personal agendas.”

By Stewart Holloway PINEVILLE, La. - Recently, a former church member messaged me for prayer. The situation is devastating, and Rebecca and I are covering it in prayer. To be asked to join this individual in prayer as a former pastor and friend was a humbling blessing. Other than a social media comment here or … END_OF_DOCUMENT_TOKEN_TO_BE_REPLACED