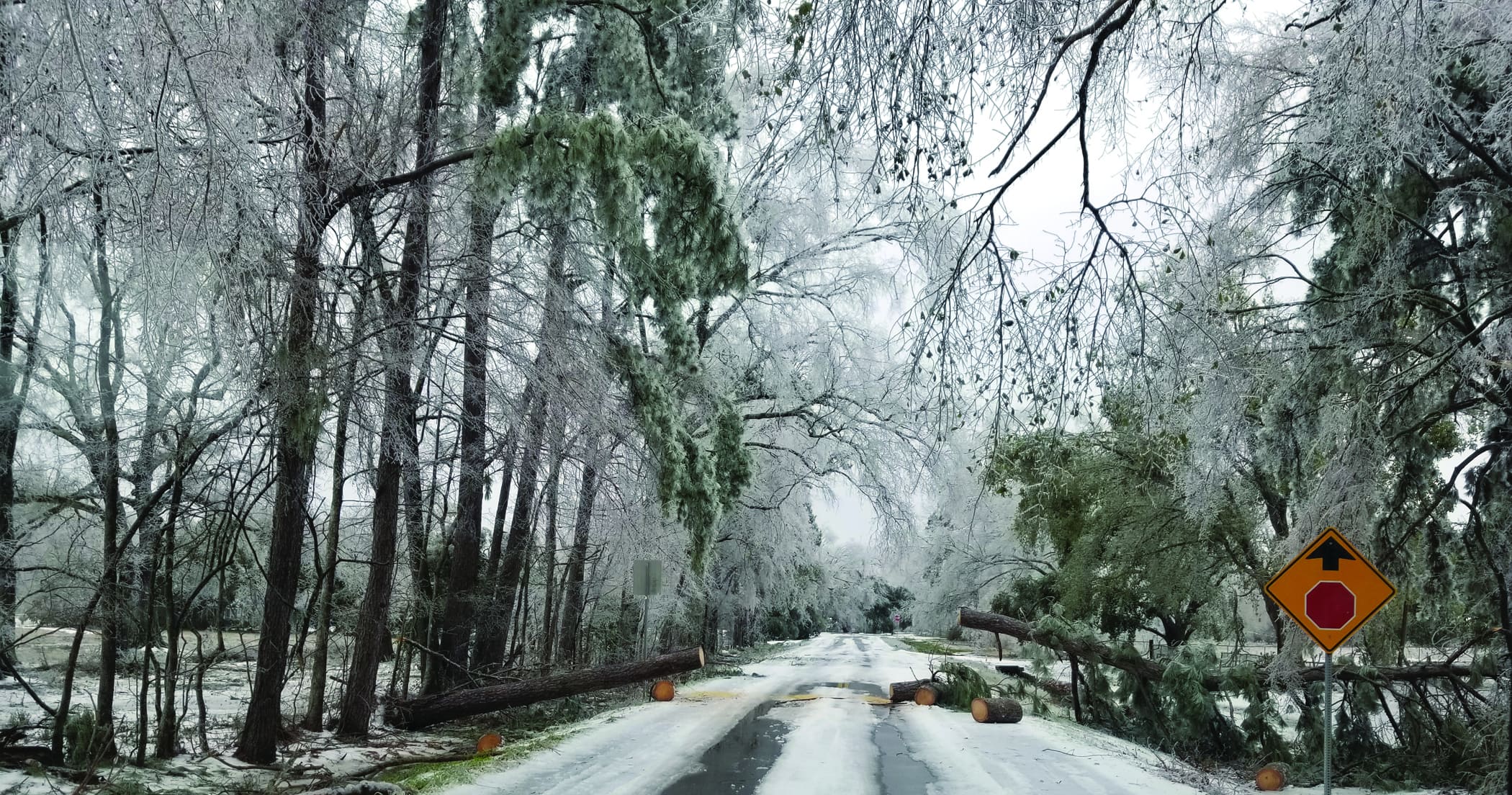 A cut-up pine tree is seen along a roadway in Deville impacted by freezing rain, sleet and snow that fell in mid-February. Philip Timothy photo

ALEXANDRIA, LA. (LBM) – In the wake of an historic winter storm in mid-February that sent temperatures plummeting to record lows, knocked out power to thousands and dumped ice, sleet and snow throughout the state, Louisiana Baptists provided much needed help.

“When the weather affects our daily living, we usually need a little help, which is why we keep supplies in stock in order to be of help to those in need,” McMillan said. “It is always great when we can fulfill the needs of our churches and students on a college campus.”

Like many communities, the city of Natchitoches and Northwestern State University’s campus were under a boil advisory following the storm. NSU Baptist Collegiate Ministry Director Bill Collins boiled 80 gallons of water using crawfish pots and delivered it to the school’s football team on Feb. 23 and 24. He also distributed bottled water, donated by Louisiana Baptist Disaster Relief, to the school’s athletic teams and the campus food pantry on Feb. 25.

“I was grateful to learn of the need and do what I could to help out our student athletes,” said Collins, also a chaplain for the football team.

Meanwhile, members of Summer Grove Baptist Church in Shreveport distributed 15 pallets of water, donated by First Baptist Church in Carthage, Miss., the Caddo Parish Fire Department and Volunteers of America on its campus Feb. 24 and 25 to residents who came to the church.

Reisa Johnson, director of the church’s Compassion 360 ministry that coordinated the effort, said some who came to the church said they had been without running water for 10 days.

“For me, it was really humbling to be available for the Lord to be His hands and feet and demonstrate His love in a tangible way,” Johnson said. “You can’t talk about what happened without tears coming. One lady said she never had to ask for anything. She was so broken and desperately needed water. It was a reminder of the way we are to come to the Lord humbly. We gave them physical water but pray they one day will taste the living water that Christ offers.”

Pastor Ronnie Sandifer said three pallets of water were donated on Feb. 22 by the Cypress Bend Fire Department, the Department of Homeland Security and State Rep. Rodney Schamerhorn. Church members handed out evangelistic tracts and offered words of encouragement to those who received the water at the church, according to Sandifer.

“We have truly gone through some hard times in the last year or so,” Sandifer said. “Right now, many people in our community are still without water due to the worst freeze we have had in many years.  It was good to see so many pull together and help in this most difficult time.

“There were many that worked diligently to get the water loaded and unloaded and given out to the needy. We even delivered to different homes,” he continued. “It was a good feeling to just see the enthusiasm in everyone’s face as they were giving out the water throughout the day.”

By Don F. Mabry ALEXANDRIA, La. (LBM)-- The number of churches in our country constantly is changing and it is very difficult to acquire information from the various denominations, but estimates indicate that there are 330,000 Christian churches and congregations in the United States today. But the question … END_OF_DOCUMENT_TOKEN_TO_BE_REPLACED